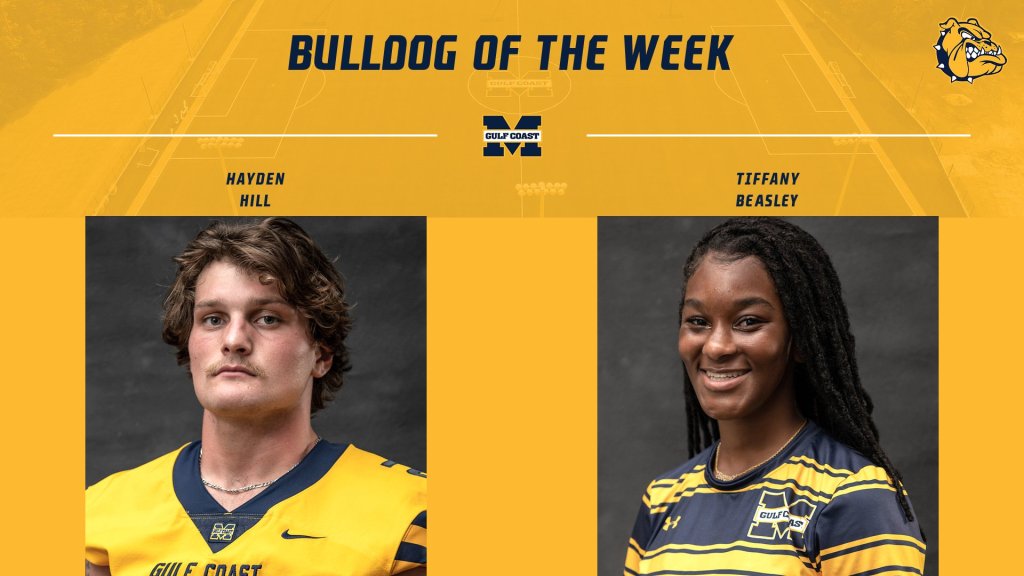 PERKINSTON — Hayden Hill and Tiffany Beasley have been named Bulldogs of the Week for Sept. 12-18.

Hill, a sophomore linebacker from Flowood, was all over the field for Gulf Coast in a 45-7 win over Southwest Mississippi. He had 13 total tackles, including three in the backfield for losses. One of those was a sack.

Beasley, a freshman defender from Ocean Springs, helped get the Gulf Coast offense started in a 2-2 tie against Hinds. Her play out wide eventually led to her scoring her first collegiate goal.

Chase Kaiser, a sophomore from Natchez, and Andrew Zielinski, a freshman from Ocean Springs helped lead No. 7 Gulf Coast to victory in the first MACCC tournament of the season. They both shot 2-under to finish tied for second, and the Bulldogs finished one shot ahead of No. 5 Meridian.

Cam Thomas, a sophomore running back from Picayune, had 93 yards on 16 carries to lead Gulf Coast’s rushing attack in a 45-7 win over Southwest Mississippi. He scored on a 39-yard touchdown and averaged nearly 6 yards per carry.

Jonathan Harris, a sophomore wide receiver from Hattiesburg, broke open the game against Southwest with a 75-yard punt return just before halftime. He averaged 30.8 yards on four returns, and leads the country in average returns. He also had three catches for 32 yards.

Grayson Nester, a freshman from Flowood, combined to record a team shutout of Hinds in a 2-0 win to open Gulf Coast’s MACCC schedule. He made two saves, but helped jumpstart the Bulldogs’ offense with his distribution.