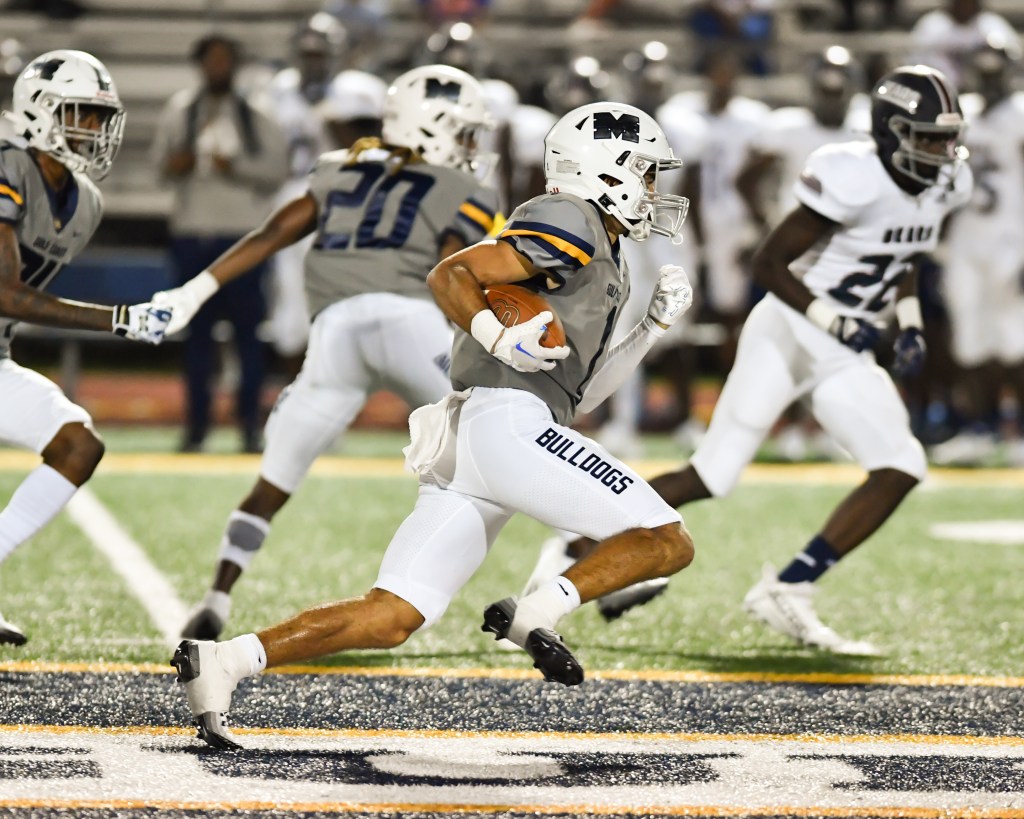 He doubled the Bulldogs’ lead in the dying moments of the first half, sending them into the locker room up 14 points on the way to the runaway victory.

“I was on the sideline and thought we needed a return to get some field position for a field goal,” Harris said. “But walking on the field I, was like, I gotta do this. I kind of spoke it into existence on the sideline, and my teammates really hyped me up.”

“The more football I watch, those are really game-changing moments,” Gulf Coast coach Jack Wright said. “We hadn’t had many of those the first two games. It was a little worrisome we hadn’t created anything like that, so I’m a little relieved. We’ll need more of those going forward.”

The Regulators sacked elusive Southwest quarterback Christopher Roberson seven times, and were it not for a turnover in Bulldogs territory and two costly penalties, they might have pitched a shutout. SMCC managed only 14 first downs, and five of those came via penalty.

The Bears completed only 9-of-25 passes for 94 yards, and Roberson was ejected in the fourth quarter for slapping a Gulf Coast player in frustration.

“We were very energetic, expecting to do what we did,” Gulf Coast defensive lineman Scott Burton said. “We’ve been practicing for it all week. We knew their quarterback was very athletic, an elusive guy, and we were ready for him.”

Gulf Coast took a 14-0 lead early in the second period thanks to a second Keymari Odum (So., Haines City Fla./Ridge) touchdown reception. He had a 10-yarder in the first half, and a long 5-yard fade pattern.

“I didn’t see the catch he made in the back of the end zone, but the press box was going crazy,” Wright said. “It was a great catch apparently, so I look forward to seeing that on film.”

Southwest made it 14-7 with 3:55 left and got the ball back, but had to punt after a three-and-out and a Gulf Coast timeout.

“He had a little space to get the return started,” Wright said, “but there was one cut he made in the middle of the field that really carried his momentum forward and took pursuit angles away from the defense.”

Gabe Showalter (Fr., St. Martin/St. Martin) nailed a 41-yard field goal in the third quarter before Gulf Coast exploded in the fourth. Thomas broke his long run to score early in the quarter, and one play later Smith returned his interception.

Dayan Bilbo (Fr., Vancleave/Vancleave) closed out the scoring with a 5-yard plunge in the final two minutes.

Gulf Coast will play No. 9 East Mississippi (2-1) on Sept. 22 at Perk. The game will be carried exclusively on ESPN+, with kickoff set for 7 p.m.

“It’s a big game,” Wright said. “Thank goodness it’s a home game and we’re back here. We don’t know a lot about them this year. We’ve got to study them closely this weekend and put our kids in position to make plays.”