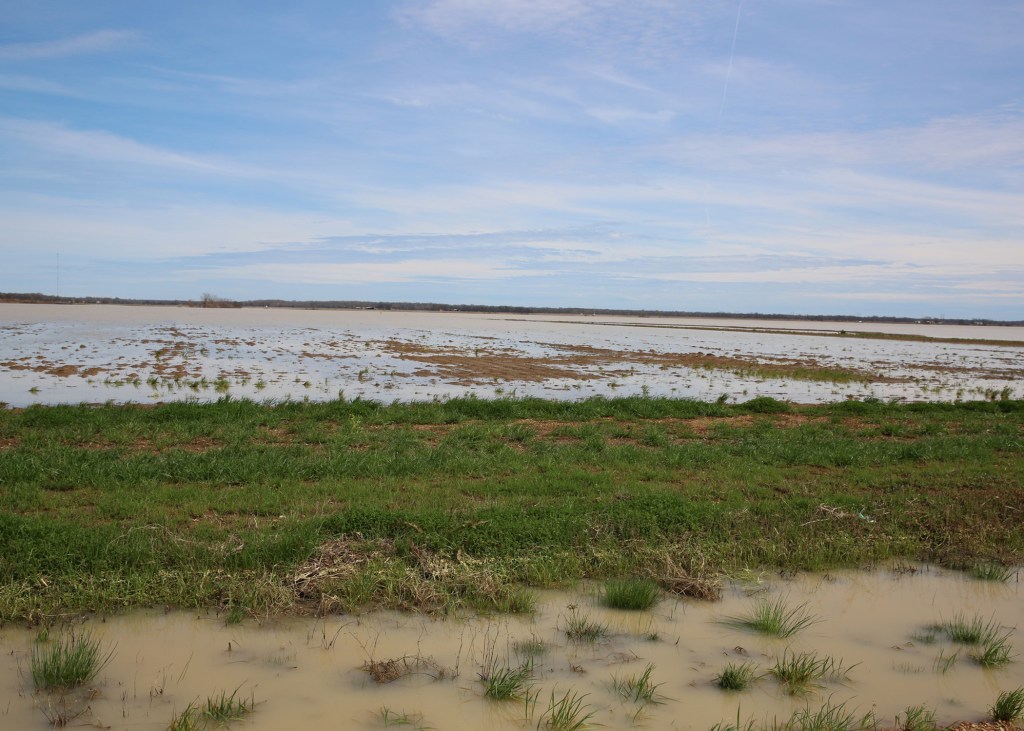 Cutline: The crops expected to be most compromised by flash flooding in central Mississippi August 21-25, 2022 will be early-planted cotton and soybeans that were nearly ready for harvest before the weather deteriorated. (File photo by MSU Extension Service/Michaela Parker) Alt text: Flooded row crop field

STARKVILLE, Miss. — Portions of central Mississippi and the lower Mississippi Delta saw more than 1 foot of rain between Aug. 21 and 25, and flash flooding will affect some agricultural commodities in these areas.

Torrential downpours dropped 8-13 inches of rain in much of Leake, Neshoba, Scott, Kemper, Hinds and Newton counties, as well as parts of surrounding counties, prompting road closures and evacuations.

The Clarion Ledger reported that the Pearl River Valley Water Supply District increased the discharge from Barnett Reservoir to 45,000 cubic feet per second on Aug. 25 in anticipation of incoming water. The National Weather Service forecasts the Pearl River will crest at 36 feet by Aug. 30 and threaten low-lying areas in Jackson and Rankin counties.

Numerous row-crop fields were saturated, and preliminary reports suggest that the crops most compromised will be early-planted cotton and soybeans that were nearly ready for harvest before the weather deteriorated.

Brian Pieralisi, cotton specialist with the Mississippi State University Extension Service, spoke with growers ranging from the south Delta to the Black Prairie regions of the state. He said there were fields where cotton bolls were beginning to open when the storm arrived.

“No one is picking cotton yet, but we are close. We will have defoliation applications going out when this weather system clears,” he said. “We can expect hard-locked bolls, some boll rot and sprouting seeds in the bur. Seeds will sprout in open bolls when the lint stays damp for several days in a row.”

Pieralisi said the severity of damage on early cotton will hinge on how long it takes to get hot, sunny conditions for consecutive days.

“If the sprout dries up while it’s still very small, it’s not much of an issue,” he said. “If the current wet pattern persists, that will only get worse.”

MSU Extension soybean specialist Trent Irby said most soybeans in the affected areas were still growing before the flooding.

“The impacts on soybean will depend on the stage of development of the crop,” Irby said. “This is one of those ‘it depends’ type of scenarios. Those acres that are ready or close to ready for harvest could absolutely be compromised with potential for seed sprouting in the pod and reduction in quality, and some later planted soybean acres that are less developed may come out of this round of weather with little to no impact to the quality of the seed.”

Field damage will be a future problem resulting from the storm system. Phillip Vandevere, MSU Extension agent in Yazoo County, said that, while rainwater is exiting fields, soggy soils will not support farm machinery until fields receive a break from the precipitation.

“Once we do get sun and start getting into the field, the crop itself will be dry, but the ground won’t be,” he said. “Growers will have to rut some of their fields up to get their crop out. It will be costly to go back and fix the fields and repair farm roads.”

While there were still numerous full corn fields in his area, Vandevere said the crop was at an advanced enough stage to withstand major damage.

“One good thing about the corn is, unless we get to where stalks start falling and lodging, the kernels are pretty hardy,” he said. “I haven’t seen any stalks falling so far.”

Reports on poultry houses affected by the rains are still being gathered, but the Peco poultry processing facility in Sebastopol was closed due to flooding on Aug. 24.