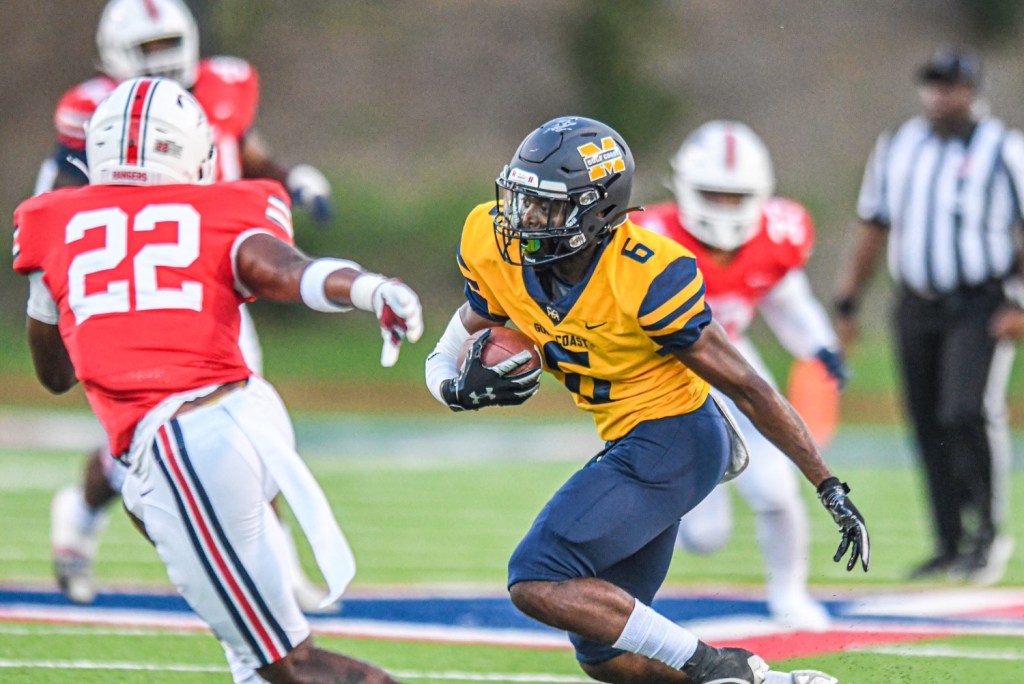 SENATOBIA — Early miscues dug Mississippi Gulf Coast a hole at No. 4 Northwest Mississippi, but the fight all the way till the end nearly earned the Bulldogs a season-opening upset here Thursday.

Gulf Coast trailed by 10 midway in the third quarter but rallied to take the lead before Northwest marched 96 yards in the final minutes to pull out a 28-24 victory.

“We made plenty of mistakes tonight,” Gulf Coast coach Jack Wright said. “We’ll look back at the film tomorrow and we’ll be an inch away from making a play here and there which might have meant a different outcome. It’s tough to stomach while we’re watching the film, but the effort was undeniable. It was there to the bitter end, and that makes me a proud coach. You never want to lose, but you cannot fault our kids’ effort, and I love them for that.”

Trailing 21-10 with 6:44 left in the third quarter, Gulf Coast put together a 10-play, 68-yard drive. Cam Thomas (So., Picayune/Picayune) carried the ball the final 11 yards to cut the deficit to four.

“I think we ran the ball a little bit better and established that more,” Wright said. “I’m not going to say we ran it great, but we ran it better. I think that opened up some stuff on the outside, and we had some guys make plays on the perimeter.”

The Regulators, the Bulldogs’ defense, stiffened to stop Northwest’s next drive. The Rangers missed their second field goal, and Gulf Coast promptly marched the other way on a nine-play, 71-yard drive.

Pat McQuaide (Fr., Solon Ohio/Solon), making his first collegiate start after redshirting at Kent State, converted a third-and-10 by finding Keymari Odum (So., Haines City Fla./Ridge) across the middle. After breaking a couple of tackles, he scampered for a 23-yard gain to the Northwest 21.

Rico Dorsey (So., Hattiesburg/Presbyterian Christian) caught a pass on the next play, skated along the right sideline and scored to put Gulf Coast up 24-21.

The Bulldogs looked like they were in prime position to ice it when a knuckleball kickoff forced the Rangers to start from their own 4-yard line. Northwest converted its only two third downs of the game on the drive, both in its own territory, and retook the lead with 2:03 to play.

Gulf Coast had two possessions and on the second, McQuaide completed a 34-yard pass to Ramone Bradley (Fr., Fairhope Ala./Fairhope) to midfield. The Bulldogs didn’t get any closer as the clock ran out on their fourth-down attempt.

Odum’s touchdown reception opened the scoring in the first quarter, and then the scoring got wacky. Northwest got a safety, a field goal, then scored a touchdown and missed a point-after for an 11-7 lead. The touchdown came on the first of two one-play, 6-yard drives. The first came after an interception return, and the second after a punt return.

“Our defense, they were in some bad spots,” Wright said. “Special teams and the offense put them on a short field. Give Northwest credit, they took advantage of that.”

Gulf Coast got a key 28-yard field goal by Gabe Showalter (Fr., St. Martin/St. Martin) at the halftime buzzer after a perfect two-minute drive. Odum had a 38-yard catch-and-run to spark the score.

After the long drive to Senatobia in Week 1, the Bulldogs get a trip to the other top corner of the state next week. They’ll head to Fulton to play Itawamba.

“It’s another tough opponent,” Wright said. “We’ve got the toughest schedule in the country with three great teams out of the North, and then the South Division is always stacked. We’re gonna have more games like this that come down to the end. Our kids have got to be in shape and they’ve got to focus and be ready to play at a high level every week.”