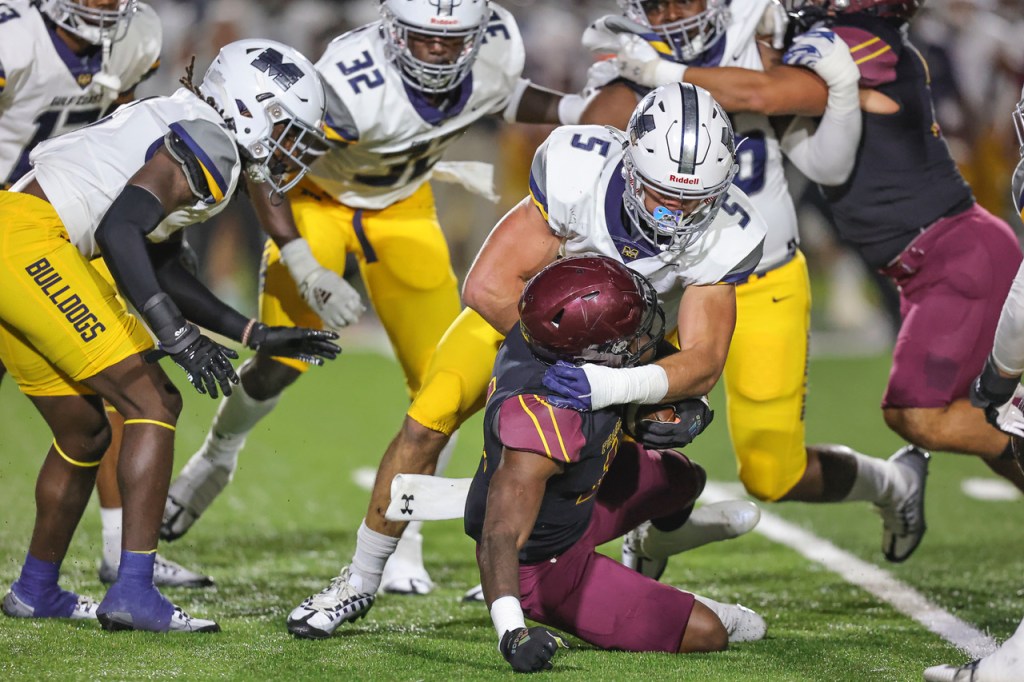 PERKINSTON — The 100th meeting between Mississippi Gulf Coast and archrival Pearl River was there for the taking for the Bulldogs on Thursday in Poplarville.

Gulf Coast, though, did too much giving. Turnovers killed the Bulldogs, who lost the milestone game 24-14 at Dobie Holden Stadium.

“I feel like we let the team down as coaches,” Gulf Coast coach Jack Wright said. “I don’t feel like we were prepared for the game. It’s disappointing from my perspective. We have the talent to win against this team. They’ve got a good team; I don’t want to take anything away from Pearl River. We have a lot of talent here at Gulf Coast. We’ve got guys who are big and who can run, and we should have been better prepared for this game. That’s on me.”

Gulf Coast fumbled three times, losing them all, one of which was returned for a 71-yard, scoop-and-score touchdown which put Gulf Coast in a 10-0 first-quarter hole.

The Bulldogs got on the scoreboard late in the first half when Davis Hart (Fr., Bogue Chitto/Bogue Chitto) caught a 4-yard touchdown pass. It was the fullback’s first collegiate catch.

Gulf Coast got the ball back to start the second half and put together a masterful 96-yard touchdown drive. Pat McQuaide (Fr., Solon Ohio/Solon) executed the freeze play to perfection, catching PRCC offside and depositing a 25-yard touchdown pass into the hands of Ramone Bradley (Fr., Fairhope Ala./Fairhope) for a 14-10 lead.

Pearl River retook the lead with a 17-play, 75-yard drive on the next possession. The Wildcats led 17-14 with 2:54 left in the third quarter. The drive lasted over eight minutes, and Gulf Coast would only touch the ball three more times the rest of the game.

They punted twice, and the second led to a touchdown drive from midfield by  Pearl River for a 10-point lead.

Gulf Coast looked ready to answer, mounting a 10-play, 73-yard drive, but it petered out after four plays inside the 3-yard line, and Pearl River ran out the clock.

Pearl River leads the series 56-43-1. It’s the only MACCC opponent Gulf Coast has a losing record against.

Gulf Coast managed to outgain Pearl River 308-285, but the time of possession was heavily in the Wildcats’ favor. They held the ball nearly 15 minutes longer than the Bulldogs, but the Regulators were pretty good despite being on the field for 75 plays.

“They played pretty well, and that’s a tough offense to stop,” Wright said. “They eke out a lot of really tight first downs. They did that and limited our opportunities. We didn’t have the ball a lot, it didn’t seem like.”

Gulf Coast travels to Wesson next week to play Copiah-Lincoln.

“This is a good team,” Wright said. “I really believe this is a good team. We have the pieces. This is a really good defense, and we were able to run the ball at times tonight. We made some plays on the perimeter. We’ve just got to put it together. We’ve got the talent, and we’ve got guys who can play at this level.”