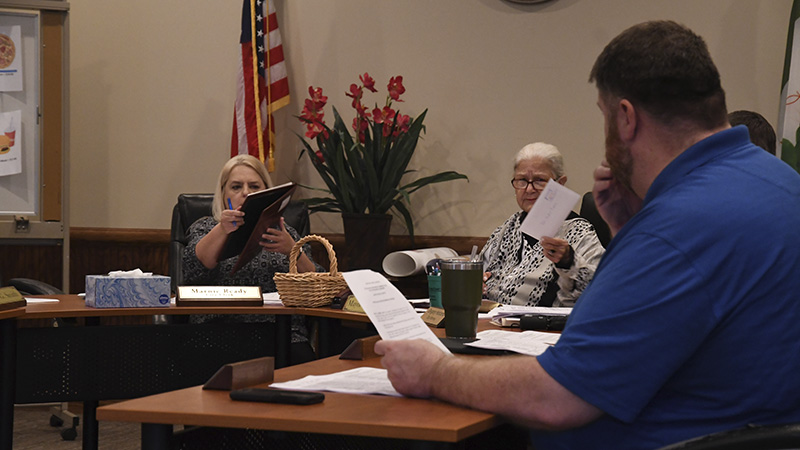 Mayor Louise Smith opens up the lone bid submitted by Terry Carver for the sale and surplus of a manufactured office building. Photo by David Thornton Jr.

The Poplarville Board of Aldermen held a public hearing on the coming fiscal year’s budget, which is anticipated to result in a tax increase to property owners.

The Board held the public hearing to allow comments regarding the proposed budget and tax millage. No public residents attended.

There was a 3-1 vote to approve the millage rate. In the resolution it stated the current mileage rate is at 54.50 mils. Also stated in the resolution, the Board anticipates that the revenue needs of the city of Poplarville will require a tax increase for the FY of 2022-2023. Millage for the FY of Oct. 1, 2022 through Sept. 30, 2023 will be set at 59.50 mills, ¼ of the millage will be set aside for fire protection and 1.0 mill will support the library.

According to Mayor Louise Smith the tax increase is to cover the $2 raise for full time city employees, including water, police and fire personnel. The raise was part of the COVID plan and affects workers who were employed during the pandemic.

“This past year we gave raises to our employees and so we need more money for those raises,” said Smith. “We had to make ourselves competitive, we weren’t competitive with the surrounding cities and with other agents that will hire people. So that was reason we gave the pay raise is to be competitive and to get quality personnel,” Smith said.

Another factor for the tax increase was an increase in the city’s operating cost, which Mayor Smith said threw the city for a loop.

“I would like for them (our residents) to understand that our operating cost had gone up and we had to be competitive with everyone else around us and it’s only fair to the people who work for us get a decent pay raise,” said Smith.

The budget will be adopted on Tuesday Sept. 6,. A request for the proposed budget by the Democrat was denied. City Clerk Marnie Ready said she is still working on the budget before it is adopted.

The Board also received and approved one bid for the sale and surplus of a manufactured office building located at 200 Highway 26 East in Poplarville. The Board was selling the building for $8,000. The lone bid came from Terry Carver in the amount of $2,600.