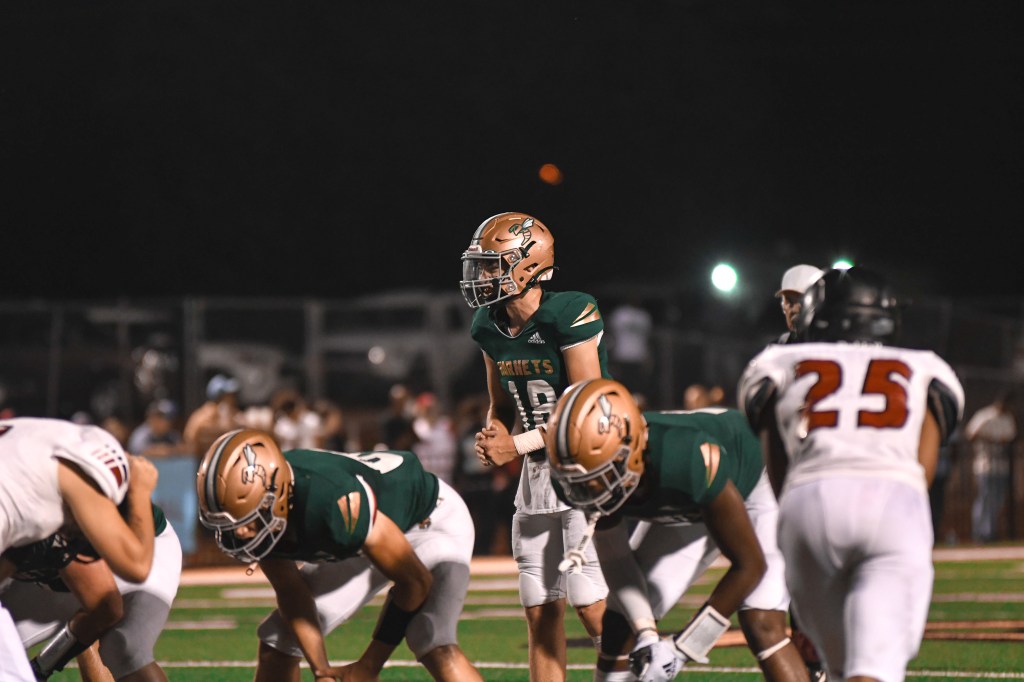 Sydney Blackman commands his offense before the snap during Poplarville’s win over Lumberton.

This Friday at 7:30 p.m. Poplarville will play at Terry, Picayune will host D’Iberville and Pearl River Central will play at Sumrall. Leading up to those matchups, the coaching staff is preparing those athletes to excel.

Poplarville (2-1) will be on the road to play the Terry Bulldogs, who currently stand at 3-0 in 6A. According to statistics on Maxpreps, Terry has passed for 218 yards, rushed for 885 yards and put up 15 total touchdowns in three games.

Mark Will carries the defense with the most tackles at 31. Avan Jarvis leads all rushers with 311 yards with three touchdowns. Maurice Travis leads the team in touchdowns with four.

Head Coach Jay Beech’s scouting report describes Terry as a team with a big offensive line with a good quarterback and running back. They run a zone read offense, have reliable wide receivers and have a big, fast and constantly active defensive line.

“We’re looking forward to the challenge,” he said.

The best course of action for the Hornets in limiting Terry’s high scoring offense is to play sound football.

Beech said his defense will need to be in the right positions, limit blown coverage incidents, keep their gaps together on the defensive line and simply make Terry earn every yard.

An area of improvement for the Hornets is receiving. They dropped over four catchable passes last week against Lumberton and those incompletions could have been more points on the board for Poplarville.

When asked about receiving, Beech said they’ve been working on catching during practice and he believes they’ll be a lot better at it come Friday.

“I think our offense and defense the last couple weeks has been improving each week. I just want to see another step of improvement, don’t want to take any steps backwards,” said Beech.

The 6A D’Iberville Warriors are 1-2 this season and is a team that had no trouble putting up points, scoring 117 points thus far. They run a similar offense as Picayune, a hard nose running team with a few surprise play active schemes up their sleeves.  According to Maxpreps, they’ve thrown for 431 yards and rushed for 988 yards over three games. On the other end they’ve allowed opponents to score 92 points.

Picayune is rocking with a 3-0 season record thus far, with a 72-21 point difference in their last three games and a total of 161 passing yards with 472 rushing yards.

“Obviously it’s a little different than what we faced last weekend in offensive schemes but the game never changes,” he said. “Lining up correctly is gong to be the number one key, and doing assignment football and playing with relentless attitude and effort.”

Stogner said this week of preparation has been great, and his players are looking at the matchup as revenge from last year. Last season D’Iberville was the only team Picayune did not beat. To prevent the same outcome, sustaining offensive drives will be key.

“We need to stay ahead of the chains early and often,” said Stogner. “We got to be able to sustain drives and stay away from punt situations as much as possible. If we’re able to win all three aspects of the game (offense, defense, and special teams) this Friday then I feel like we’re going to be successful.”

Sumrall is 2-1 this season, putting up 47 points and allowing 65. According to Maxpreps, they’ve put up a total of 213 passing yards and 411 rushing yards.

The Blue Devils are 0-3 this season with a total of 90 passing yards. PRC has yet to reach the endzone this season. Sophomore Gavin Graham leads the team in tackles with nine along with one forced fumble.

Head Coach Jacob Owen said Sumrall is a young team just like the Blue Devils that run a 3-3 defensive stack.

“They can throw it, they can run it, they’re pretty balanced,” said Owen.

Some ways PRC intends to stop Sumrall from scoring is to limit the impact of their key players. Owen said they like to get the ball to those players in certain situations, so making sure PRC has dependable personnel around them who will pursue the football is key. Coming off a bye week, Owen said they’ve had two physical weeks of practice, including working on perfecting their run game.

“No kid likes a bye week but I felt like the type of team we have this year it’s important for us to take that week off and kind of reevaluate where we’re at so far and focus on where we need to improve on and really focus on those things,” said Owen. “We’re trying to commit ourselves to being a better running football team.