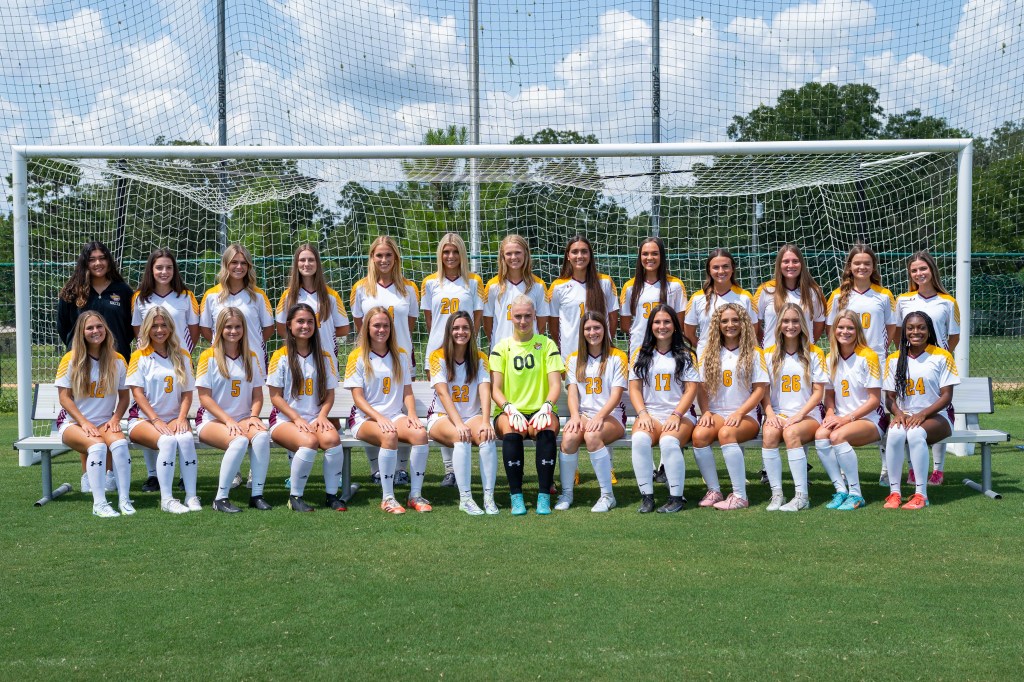 POPLARVILLE, Miss. — It wasn’t until midway through the 2021 season that the Pearl River women’s soccer team really started to click, finishing the year with an 8-6-2 record. With a roster full of veteran leadership, head coach Henrik Madsen doesn’t think the Wildcats will have that issue again in 2022.

“Last year kind of felt like a rollercoaster because we had so many new players on the team,” Madsen said. “It took them a little while to get used to what playing college soccer was like. We went back-and-forth with our results at the beginning of the year. It wasn’t until the halfway point of the season that it clicked.”

Pearl River is loaded with veteran talent this season, returning 15 student-athletes from a season ago. Five of those players are back for a third season due to added eligibility from COVID-19.

“Because of all the veteran leadership, it becomes a lot easier on the newcomers,” Madsen said. “They have the older players to look up to who have been through a season and know exactly what to expect when we play a Gulf Coast or Jones.”

The Wildcats will again base out of the 4-3-3 but with added versatility and the depth at each position, changing formations throughout games is expected. As far as playstyle goes, Madsen and his Wildcats can play however they need.

“We can adapt our play style to however we need it to be,” he said. “If we want to play the long ball we can do that. We have players who can go long. We have a goalkeeper who can kick it anywhere we need her to. With our versatility, our formations are going to be fluid too. We will go between a 4-3-3, a 3-5-2 and a 4-4-2. We can change multiple times throughout a game due to our personnel.”

Much like most of the other positions groups, the attack will be a battle between several players. Those who could feature at the forward positions are Ally Davis (Hattiesburg), Alyssa Fleming (Carriere; Pearl River Central), Jess Harrison(Gulfport; St. Patrick), Adele Mooney (Lafayette, La.; Ascension Episcopal), Ann Maris Ragan (Flowood; Hartfield Academy), Bre Stansberry (Lucedale; George County) and Morgan Westling (Poplarville).

“It’s been a tough competition at the striker and wing positions in practice and I think that the girls know that,” Madsen said. “We are going to be able to keep them fresh. We don’t have to play the same players for 90 minutes. Because of our personnel, we can play two, three, or even four up front if we need to. We have a lot of options.

“They all have different qualities and different roles. Not every player has the same style. I think we will be a little more difficult to defend whereas last year we had one style of play.”

Davis and Harrison are the only two returners. Davis collected two goals and an assist while Harrison picked up four goals on the year. Newcomers Mooney and Ragan will be key contributors in the attack and both possess different play styles.

“Adele is super at holding up the ball. She can be a target player for us at the top of the formation,” Madsen said. “Ann Maris can really run the channels and is super athletic. She can get in behind and has some strike on her when she hits the ball.”

“We hope the returning players are all taking the next step,” Madsen said. “They’ve all had a year now, so they know what the league is about and how we want them to play. I expect them to be even better.

“We’ve got some new players that can come in and really play. They’ll add a lot to our midfield. The message to the midfield group is that you have to be good to get your spot. It’s going to be competitive.”

Havard, Spataro and Satcher are entering their third seasons with the program. Havard picked up an assist last season and Spataro scored a goal and assisted on three more. Satcher has missed the last two seasons due to injury.

“Katie is going to be one of the hardest working players in the league,” Madsen said. “Sydney is going to be a versatile player that we can play at six different positions if we need to. Jenny was unlucky because of the spring and fall seasons in 2021. She tore her ACL in the spring and missed the fall as well. She’s had a good preseason so far, so we are hoping that she continues to progress.”

Madsen and Cuevas are newcomers that look to impact the game in the midfield.

“Iben has come in and done a really good job as a center midfielder and upped the level there,” Madsen said. “Maddie is similar to Bailey (Smith) and Sydney because she can play multiple positions. It’s a matter to find where she’s best.”

At the outside back position, Smith is back to lead the way. Other players who could see time at the position are Mackenzie McKinney (Gulfport), Bailey Craft (Picayune) and Camryn Aldous (Petal).

“We’re deep on defense. We have several who can come in and play center back. At outside back, there are a few at each position,” Madsen said. “It’s going to be a matter of who shows up and is consistent in practice. Who is doing the right things in the classroom and who isn’t getting in trouble. There are a lot of factors that will play into how we line things up.”

Smith and Lentz are hitting the pitch with the Wildcats for a third season.

“The third-year defenders just bring some continuity to the game. They bring some comfort because they’ve played together for three years. Them plus Anita between the posts, it just makes everything easier for them.”

Bennett will be a leader along the backline.

“Lauren Bennett from a leadership standpoint is going to make a big difference,” Madsen said. “She’s hard-working and is a super quality player. That speaks for itself.”

Madsen believes that Winters will make an immediate impact as a freshman.

“Winters has the ability to come in and be one of the best center backs in the league,” he said. “Her along with Lauren, Lily and Emma is going to make us really solid at the back of the formation.

The surest position of all is between the posts for the Wildcats as sophomore Aníta Guðmundsdóttir (Kópavogur, Iceland.) is back to lead the charge at goalkeeper. A year ago, Guðmundsdóttir started 13 games and made 74 saves against 17 goals allowed.

“We think that we have the best goalkeeper in the country in Anita,” Madsen said. “She’s very good with her feet, so we can play the ball through her which is rare. We plan to take full advantage of her abilities this season. It all just becomes a matter of how we set things up in front of her.”

Pearl River hits the field for the first time in the 2022 campaign Saturday in Daphne, Ala. against Columbia State. The match is set to get underway at 12 p.m. PRCC’s first home contest is a non-conference matchup against rival Gulf Coast on Tuesday at 7 p.m.

Pearl River athletics will be cashless for ticketing starting in 2022-23. Purchase single-match or season tickets ahead of time at PRCCAthletics.com/Tickets.

The Wildcats will once again livestream all matches for free at PRCCMedia.com. Fans who have Roku, Amazon Fire or Apple TV devices can also watch the Wildcat broadcasts by downloading the “Pearl River CC” channel from their app stores.