The Backbone Of The Bulldogs 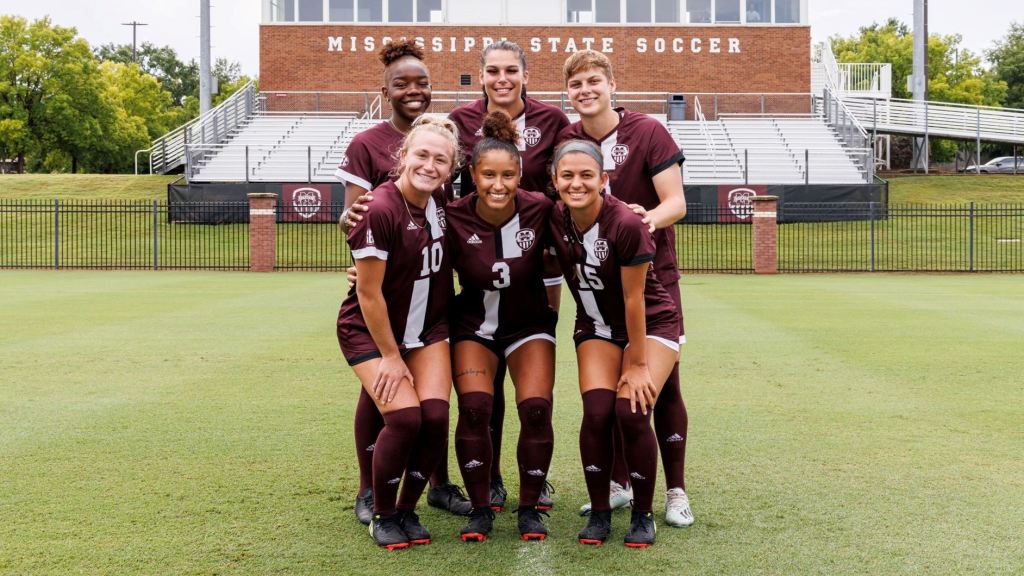 However, in looking back at Mississippi State’s soccer season of a year ago, at least one figure absolutely had a tremendous influence on the Bulldogs’ results. The number? Zero.

That’s how many fifth-year players MSU had on the squad in 2021. While many of State’s opponents enjoyed the benefit of having athletes who’d spent half a decade playing college soccer, not one Bulldog could claim the same. At least part of the reason State dealt with so many almosts and could-have-beens last year was because it was often at an experience disadvantage at the top.

Well, that’s no longer the case.

When Mississippi State heads to the pitch for its 2022 season opener on Thursday night [August 18] at Miami, the Bulldogs will do so with a total of six fifth-year performers, five of which are in at least their second season at MSU. Now that fact alone offers no guarantees of success in the season ahead, but you better believe it helps.

“It makes such a difference,” MSU head coach James Armstrong said. “You have four years in a weight room and four years of experience. You can’t compete with that sometimes.”

Tyrrell and D’Aloise are two of MSU’s team captains for what’s now a third-straight year. Telleysh doesn’t have the title of captain but stands as one of the club’s most influential members. Mummert is a former team captain at Louisiana whose toughness and talent are an example for everyone. Carrasco, as well as Tyrrell, have both spent their entire careers in the Maroon and White and were a part of State’s 2018 NCAA Tournament squad. Ngongo is new to MSU but was a captain with UTEP a year ago.

This group is essentially the bread and butter of the Bulldogs. They set the tone. They’ve been through the wars, seen it all and done it all. This is a bunch who takes pride in leading from the front.

“Us fifth-years definitely demand a lot from everyone because we know how important the season is and how quickly it goes by,” Telleysh explains.

The players’ presence and demeanor obviously provide so much for Mississippi State, but above all else, it seems they’ve all helped give the Bulldogs incredible program momentum as a new year kicks off.

Armstrong believes much of that is a credit to the choice made by D’Aloise when the Texas native chose to leave the Lone Star State after two seasons at Texas Tech to come and play at MSU.

“She changed our program,” Armstrong said of D’Aloise. “She brought a sense of dedication and commitment that the team needed at the time. She changed the locker room right away in terms of, ‘This is what we’re doing.’ I think it takes a special person to come in and do that.”

Even through an injury shortly after her arrival at State, D’Aloise’s influence continued to be felt.

“She was out all spring, yet somehow managed to change the commitment level of the team and get voted as captain that summer,” Armstrong recalled.

If that wasn’t enough, D’Aloise’s presence alone is at least a part of why the future for State soccer looks bright for years to come. Armstrong explains the Dallas area – D’Aloise’s old stomping grounds – is a recruiting hotbed for the Bulldogs. D’Aloise becoming a State standout has shown to others from the location that Starkville is a destination place to play college soccer.

“[D’Aloise’s] seemingly enjoyable experience has kind of created a ripple effect from a recruiting standpoint,” said Armstrong. “[Current Bulldogs such as Juliet Moore], Molly McDougal, Ally Perry, Allison Kolski – they might have been interested in Mississippi State [before D’Aloise came]. I don’t know. But with them having Alyssa here, that was one of the best youth players in Dallas for one of the top clubs who was thriving and enjoying it here. It kind of spread like wildfire in the Dallas circle. So, I can’t say for sure those four would’ve come if Alyssa wasn’t here, but I can say for sure, it definitely helped.”

The additions of Telleysh, Mummert and Ngongo were also all vital to what’s now the 2022 State foundation.

Telleysh came to MSU from South Florida after the 2019 season. Fast-forward to the present and her voice carries as much weight as any Bulldog’s.

“She is – outside of the captains – the biggest influence in the locker room,” Armstrong said. “She 100 percent has the biggest influence. When [we ran our offseason event] The Program and [those individuals running that] came in, they kind of said, ‘Alright, your team captains are really good. But you have somebody in that locker room that will dictate which direction the rest of the group goes. Will they go with the captains or will they not?’

“She’s had a really positive influence so far this season and hopefully that continues. She’s one of those rare people that can transcend across all of the classes. Like if you sit the freshmen down and say, ‘Hey, how’s it going? Have the older players helped you?’ They always say, ‘Hannah Telleysh.’ But the funny part is they always start off with, ‘I was terrified of Hannah Telleysh when I started, but she’s been awesome to me.’ So, she’s that imposing figure to start with, then becomes like the mother hen a little bit.”

Then, there’s Mummert. Ironically, it was playing against MSU that put her on State’s radar. As fate would have it, she’d eventually be a Bulldog herself.

“We played Louisiana-Lafayette in a spring game the spring before she transferred in and we said, ‘Man, how come we can’t get lucky to have a center back like that in our ranks?'” Armstrong shared. “The craziest thing, towards the end of spring, she’s in the transfer portal. It was one of those things where we went all in. We called her up right away. We found ways to get ahold of her when she was in the portal. She agreed to come in and straightaway, like Alyssa, there was the sense of leadership and professionalism. She comes in and has a great vibe about her.”

Mummert’s State journey did have an early hiccup. She broke her collarbone in only her second game last season.

Mummert returned a month later but wasn’t quite herself said Armstrong. Headed into this year, Armstrong believes Mummert is back to being the player and leader the Bulldogs know she can be.

“She’d never had a broken bone before or anything before last year,” Armstrong said. “She’d never been out injured, and it really hit her self-confidence-wise and it’s taken her a long time to get back to, ‘I’m OK. I’m that physical defender still.’ When your self-confidence playing-wise goes, your leadership voice dwindles a little bit as a result…Now she’s got her self-confidence back. She looks tougher. She’s been someone that’s been a great pickup for us.”

Add in Ngongo fresh off a 2021 season where she led UTEP in goals and you can see how the backbone of this year’s Bulldogs is solid.

And while all these additions in recent seasons have certainly given the Bulldogs a shot in the arm on the field and off, don’t forget pieces were already in place to push State forward. Tyrrell has played in 62 career games over the last four years at MSU. Carrasco has seen action in 50 contests.

Though there was some success in the early days of the State careers of Tyrrell and Carrasco, the Bulldogs were still searching for what they needed to take another step forward. D’Aloise, Telleysh, Mummert and Ngongo’s arrivals have served as missing pieces of the puzzle.

“There were arrows pointing in different directions in the past,” Carrasco explained. “I felt like we weren’t fully there yet. So, to be a part of a Mississippi State team now where I feel like we are all there and we’re all on the same page and have our core values integrated in all of us…I think it truly is something special. It just feels different. It feels so different.”

Time will tell if it all translates to the pitch, but history indicates all this veteran experience will absolutely give the Bulldogs an edge.

“When you look at the league last year, the teams that did well were the ones that had a lot of experience with fifth-years,” Armstrong said. “After not having any last year, to be able to turn that completely on its head this year is something we’re super excited about. All of the players returning, not only are they experienced, they’re great for team chemistry and great for team morale. They’re all impact players on and off the field. So, from that standpoint, it’s definitely a refreshing change and something we’re looking forward to.”

On Thursday night, this group’s 2022 journey begins. Every season begins with optimism, but thanks to MSU’s veteran leadership, everyone from the top down believes this year’s Bulldogs have the chance to be special.