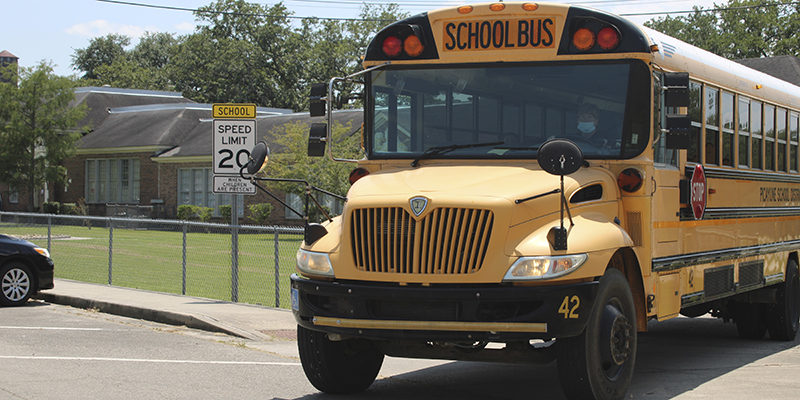 A nationwide bus driver shortage has affected schools within Pearl River County. The three districts, including Picayune, Poplarville and Pearl River County, are all facing challenges with low driver staff, meaning longer routes and fuller busses. Each school’s transportation director provided the status of current bus drivers along with route changes as a result.

Pearl River Central School District is short 10 bus drivers, so as result had to added more children to pick up and drop off locations. As a result the district is searching for applicants to fill those positions.

“In the past we’ve had more stops in front of houses, but we’ve had to add more bus stops where multiple kids will come to one area or one bus stop located at the end of the street or intersection,” said Chief Operations Officer T. J. Burleson.

The general rule within the PRC school district is to have busses picking up younger children come within 0.2 miles of the child’s house.  Older student are generally picked up within 0.4 miles from their house.

In order to get students to school on time, PRCSD will pick up children no earlier that 5:45 a.m. That means bus drives have longer and more routes. Some busses may take two to three trips to pick up and drop off all students on their routes. Drivers this school year will have normal routes and short routes. Short routes include bus stops that are in easy and quick areas for drop offs and pick-ups.

“The short routes are a quick drop off, 4-5 stops at the most just to get as many kids as we can dropped off in a short period of time. The longer route might have up to 30 stops on it,” said Burleson.

Burleson said they’ve received over 30 applications for school bus drivers. One requirement is they all lack is the Commercial Driver’s License to drive a bus.

“That is a process within it self, that takes a long time to get. It takes commitment from those individuals to get their license,” said Burleson.

It takes up to 20 days after passing the required course exams to receive a CDL.

PRC school district is trying hard to fill those positions, but a lot of the 30 applicants have picked up the CDL manual to get a jump-start on taking the exam.

PRCSD is offering a staring hourly wage for bus drivers of $17 with a $23.38 cap. Applications can be filled out on the PRCSD/career website.

As of this week Picayune School District is four drivers short. Routes has been modified to be a little bit longer than they normally are to get students to school on time.

“The routes are fuller and longer,” said Director of Bus Routing Betty Peterson.

To held ease the worries of parents and guardians, Peterson wants to remind everyone that the buses are kept as clean as possible and the bus loads will be lightened as soon as more drivers are hired.

“I encourage parents, if they are that concerned and are able to bring their children, I encourage them to do that,” said Peterson.

The Picayune School District will reimburse drivers for the required paid testing after working for the district for three months. The starting hourly wage for a bus driver in Picayune is $16.46 with a 10 cent raise every year.

Poplarville School district is just one or two drivers short so their routes are running normally, but Poplarville’s Director of Bus Routing Jason Jones is keeping his fingers crossed.

“We’re a couple drivers short, and I say that lightly because last year it got really bad at one point. Sometimes we’re losing eight drivers in one day and that’s bad. We were doubling routes and things like that. We have not come that point this year,” said Jones

A the end of the last school year, Poplarville School District had to adjust their routes to account for the shortage of drivers. They haven’t had to implement that this year, but Jones is ready for a worst-case scenario.  There are substitute bus drivers in place if a driver shortage occurs.

Jones hopes they won’t have to adjust their routes this year.

With zero experience drivers in that district can earn $15 an hour with a .20 cent increase every year.