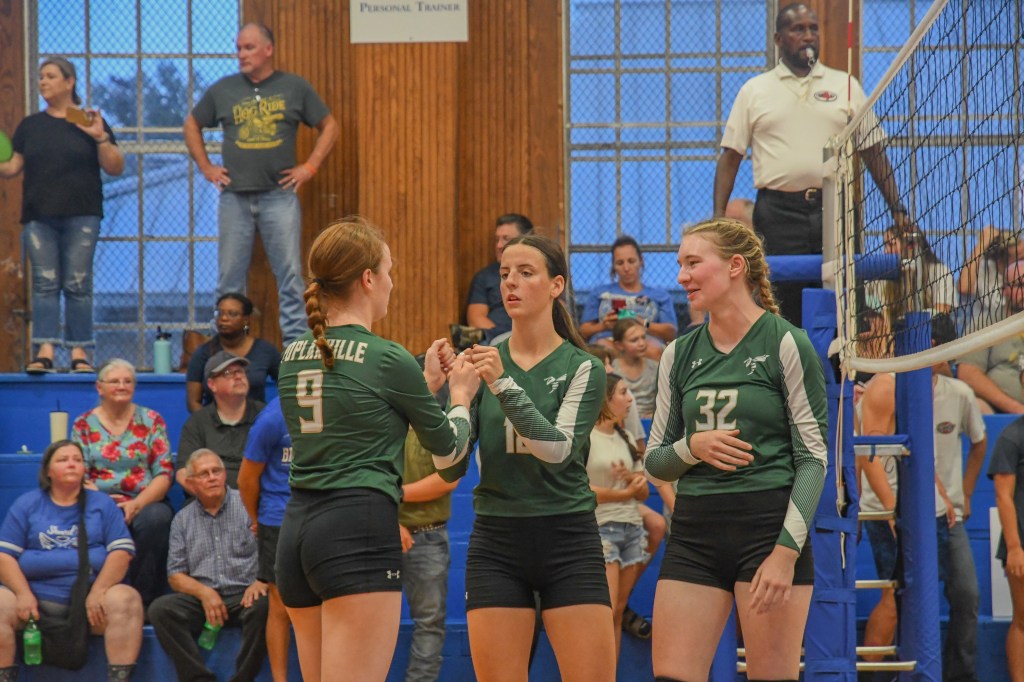 Poplarville is 3-1 this season coming off back-to-back wins. Pearl River Central dropped to 2-3 on the season.

Set one of this county rivalry was one sided. At 23-11 the Lady Hornets closed out the game with two kills from Caroline Phares and Raylein Davis.

Set two was a very close game that finished with a score of 27-25. During that set, it was tied 6-6 until the Lady Blue Devils took a 10-7 lead. PRC’s Isabella Martin had a kill in that sequence. PRC’s lead grew 16-12, but another tie occurred at 17-17 after an Anne Amacker kill. Amacker spiked another kill to take the lead at 18-17. With the game in the hands of the Lady Blue Devils at 23-21, the lead was taken away again and tied 23-23 by kills from Amacker and Ashleigh King. An ace by Amacker for the Lady Hornets gave her team a 25-24 lead but a serve error followed and tied the game once again. The Lady Hornets clinched set two after a kill by Bri Burt and a Lady Blue Devils error.

Set three was tied at 10-10 after Poplarville held an early 4-1 lead. A Martin ace gave her team a 12-10 lead but Poplarville tied the game after an assist/kill combo from Phares to Lendy Crider. From there the lead grew to 18-12 for Poplarville. The Lady Blue Devils did their best to make a run, but the Lady Hornets wouldn’t give points away easily. From 18-12, the score reached 20-15 after an ace by Taylor Walters and ace by Autumn Craft. With the score at 23-16 Poplarville closed the curtains with a kill by Davis and an ace by Phares.

Both teams will be back on the court this Tuesday. The Lady Hornets will host the Purvis Tornadoes (4-1), and the Lady Blue Devils will travel to Wiggins and play the Stone Tomcats (0-3).