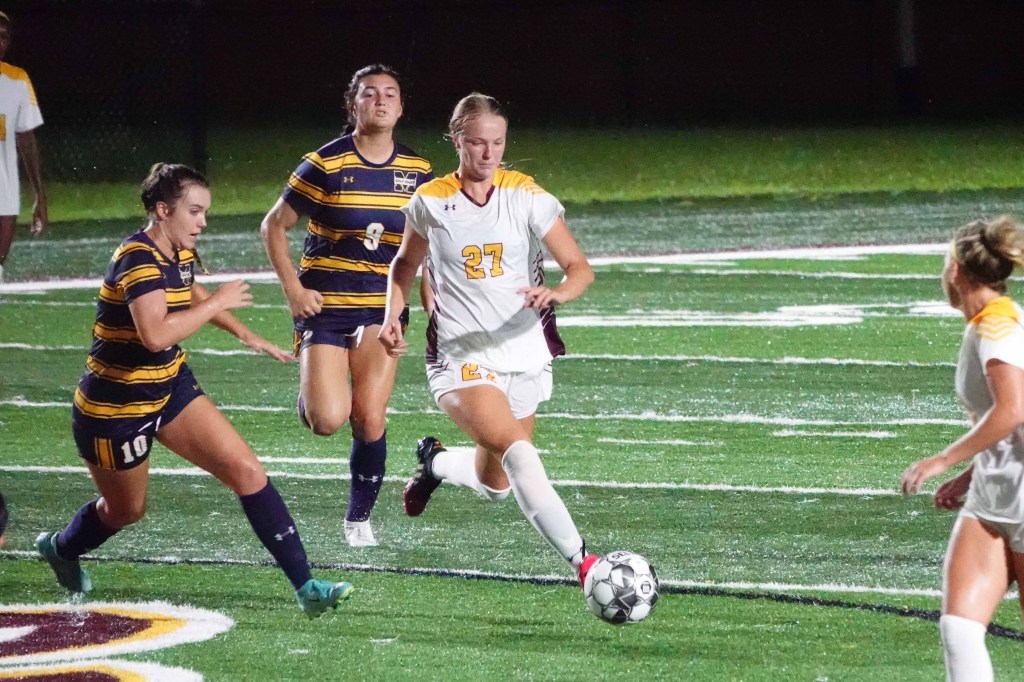 POPLARVILLE, Miss. — The Pearl River women’s soccer team spent the entire day wondering if they were going to get a chance to play Tuesday evening due to the weather. After pushing the game back, the Wildcats found a pocket on the radar without rain and made the most of the opportunity, defeating archrival Gulf Coast 1-0.

“The day was tough because you don’t know if you’re going to get to play,” head coach Henrik Madsen said. “Then you have to deal with finding the timing for the game and trying to keep the player’s minds right. I thought that the girls did alright. They worked really hard. We played well in spurts.

“It’s always good to play your rival and get a win. It’s always a tough one-goal game or tie game. The games are always fun and that’s what rivalries are about.”

Pearl River (2-0 overall) was on the attack early and often during the first half of the contest, having several chances fizzle out near the box.

The first near miss came in the 10th minute of the night when Ann Maris Ragan (Flowood; Hartfield Academy) fired a shot at the goal that sailed just over the top of the crossbar and out of bounds.

15 minutes later in the 25th, Bailey Smith (Gulfport) had an opportunity to get on the scoresheet. The third-year outside back had moved up in the formation and joined the attack. As she moved into the far-right side of the box, she unleashed a shot that hit the side of the net and went out of bounds.

The Wildcats finally broke through in the 40th minute of the first half of play. After a ball played into the box was rolling between defenders, Southern Miss transfer Lauren Bennett broke towards the goal and joined a scramble of Wildcats to tap the ball into the back of the net, giving PRCC the 1-0 lead.

“The goal was off of a corner kick,” Bennett said. “We had a lot of opportunities up there tonight. I think Alexis Cochran (Hurley; East Central) played it into the box and Emma Godfrey (Pascagoula; Resurrection Catholic) got a head on it. Adele Mooney(Lafayette, La.; Ascension Episcopal) was blocking the vision of the keeper. I just happened to be there for the tap-in. If it wasn’t for those two, I wouldn’t have been able to get that one in.”

Pearl River was unable to find any other goals in the half, entering the break with the 1-0 advantage.

Over the course of much of the second half, neither Pearl River nor Gulf Coast (0-1) were giving up much on the offensive side of the ball.

One of the best chances of the second half for the Wildcats came in the 82nd minute as Bennett nearly picked up a brace. The center back unleashed a shot from deep that curved and went just above the crossbar for a goal kick.

Gulf Coast had a chance for an easy one-on-one goal moments later, but Mackenzie Winters (Ocean Springs) sprinted from across the field and knocked the ball away from the attacking Bulldog.

“Mackenzie is very good,” Madsen said. “It’s always to have someone with that kind of speed on the team. She’s able to come across and cover that distance in a hurry. It’s nice to have her back there. I wish she didn’t have to do that, but we’re glad that she can if it is needed.”

MGCCC had a great chance to even up the scoring in the 87th minute. A Bulldog forward dashed towards the goal and fired a shot right at Aníta Guðmundsdóttir (Kópavogur, Iceland.) who pushed the ball up and above the goal.

After Guðmundsdóttir turned away another shot off a corner kick, Gulf Coast launched a shot off the crossbar which proved to be its last opportunity on the night.

The Wildcats held on for the slim 1-0 victory, shutting out its archrival in the process.

Pearl River hits the road Saturday for a matchup with Mineral Area at 2 p.m. The matches will be played at Itawamba’s campus in Fulton.