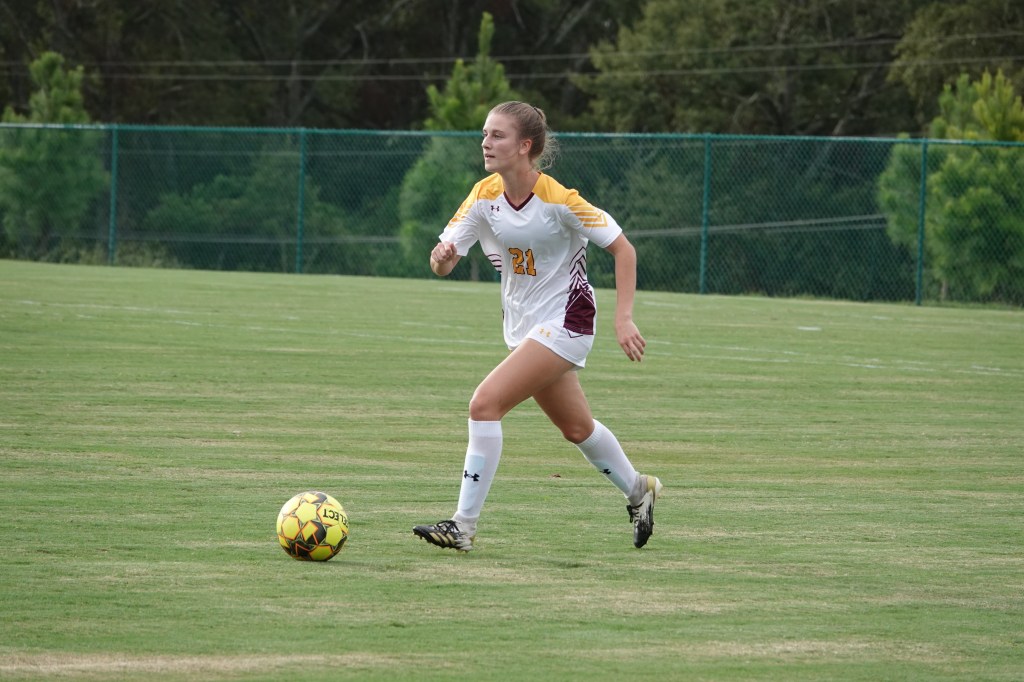 DAPHNE, Ala. — The Pearl River women’s soccer team kicked off its regular season with a bang Saturday, using a pair of second half goals to power past Columbia State 3-1.

“It was a really great start to the season,” head coach Henrik Madsen said. “We had to deal with a bunch of rain right before we played, so the field conditions were tough. I thought the girls played really, really well. They created a lot of opportunities, and we were able to come out with the win.”

Pearl River (1-0 overall) wasted no time getting on the score sheet, grabbing its first goal of the 2022 campaign in just the ninth minute of the contest. Lucy Conway (Portsmouth, England) dished a pass off to freshman forward Ann Maris Ragan (Flowood; Hartfield Academy) who smashed it past the goalkeeper for her first collegiate goal and a 1-0 lead.

Columbia State (0-1) evened up the scoring at 1-1 in the 25th minute of the day, capitalizing on a penalty kick opportunity.

Neither team was able to scratch across any more goals in the first half, entering the midway point tied.

Conway added to her fine day in the 70th minute of the contest, putting Pearl River on top 2-1 thanks to an assist from Ally Davis (Hattiesburg).

Sydney Spataro (Long Beach) gave the Wildcats some insurance in the 80th minute of the day, picking up her first goal of the year off another Davis assist. The goal gave PRCC a 3-1 advantage.

The 3-1 lead was plenty for the Wildcats as they held on to claim their season opener.

Madsen talked about the play of Conway and Davis after the match.

“Their hard work is paying off,” he said. “They have worked really hard all preseason. They were very prepared, so they got into the right positions and made the right decisions. I’m super happy for both of them.”

Madsen highlighted Ragan picking up her first goal as a Wildcat.

“It’s great for a freshman to get on the board in her first regular season game. She’s clever and she’s always in the right spots. She found the right pocket and scored the goal pretty easily.”

“I thought all three of the center backs and Anita were very good,” he said. “Anita made some crucial saves and the back line played very well together. Everyone back there was very good.”

The Wildcats return to action Tuesday for a non-conference matchup with rival Gulf Coast. The game is set to get underway at 7 p.m.

TICKETS
Pearl River will be cashless for the 2022-23 athletic year. Purchase single-match and season tickets at PRCCAthletics.com/Tickets.

The Wildcats will once again livestream all matches for free at PRCCMedia.com. Fans who have Roku, Amazon Fire or Apple TV devices can also watch the Wildcat broadcasts by downloading the “Pearl River CC” channel from their app stores.