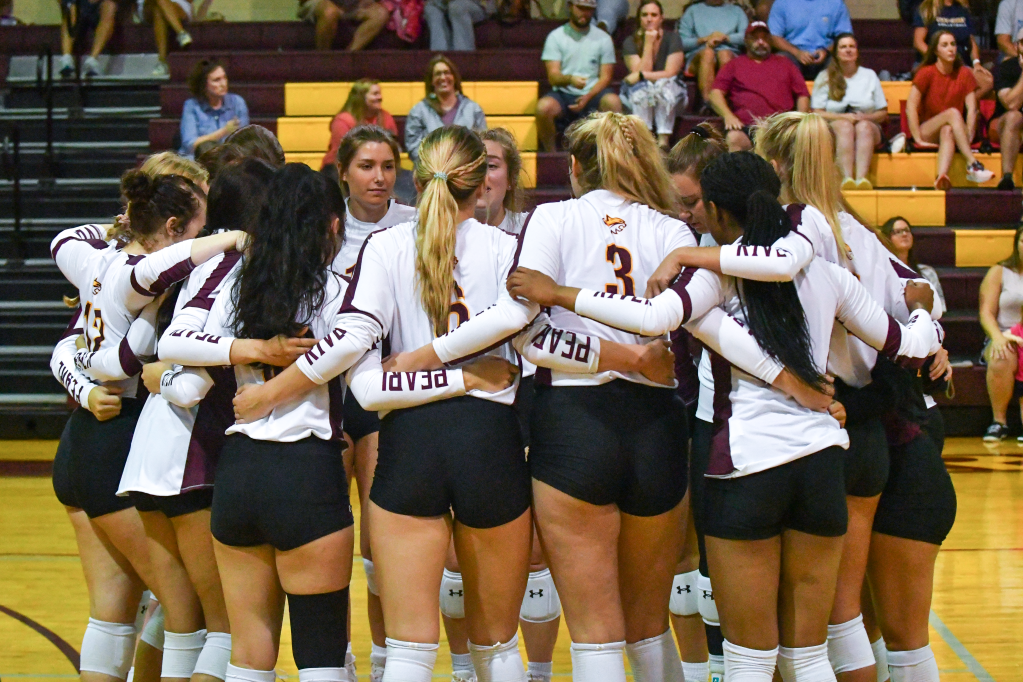 “We’re so thankful to pull out the first win of the season,” Pearl River coach Haley Chatham said. “Our players get better and quicker every set and as long as we continue that, we will be in good shape.”

Despite finding themselves behind in the early going of each set, the Wildcats battled back in each set.

“I’m learning that this team is full of fighters,” Chatham said. “Their high school and club coaches did a great job of instilling tenacity into every single one of them. Their spirit is unbelievable and we are going to keep that going full steam ahead.”

While Pearl River (1-2 overall) grabbed the first point of the night, Coastal Alabama – East (0-2) quickly took the next two points to take an early 2-1 lead.

It was all Wildcats from there. Addie McNeely (Brandon; Hartfield Academy) smashed a ball that the Warhawk player couldn’t handle to tie up the contest at 2-2. PRCC then grabbed the next three points, highlighted by a kill off the hand of Natalie Bartholomew (Brandon) to take a 5-2 lead.

While leading 8-6, the Wildcats took eight consecutive points from the Warhawks to take a commanding 16-6 lead. The run was highlighted by three thunderous service aces from Bartholomew and a combination block from Julianah Overstreet (Vancleave) and Sammie Smith (D’Iberville).

The Wildcats continued to breeze by the Warhawks, taking a 23-15 lead deep into the first set. PRCC finished things off right after, using another combination block from Overstreet and Smith followed by a kill from Jasmine Burdine (Biloxi), winning the set 25-15.

The Warhawks again jumped out to an early lead in set two, going ahead 4-1. The Wildcats found themselves down 7-4 before they climbed back into the match. Bartholomew picked up a kill to make it 7-5 and Delaney Sisson (Auburn, Ala.) followed it up by freezing a defender to pick up an ace. The point made it 7-6.

Smith tied things up moments later, crushing a ball for a kill. Overstreet then picked up a solo block to give the Wildcats their first lead of the set at 8-7.

CAE tied things up once again, but the Wildcats took two straight points off a pair of kills from Bartholomew and Overstreet to go up 10-8.

Pearl River extended its lead out to 18-13 midway through the set after a punch from Bartholomew fell in front of an unexpecting Warhawk player.

Coastal Alabama – East was able to claw back into the match, however, tying things up at 23-23 all late into the set and eventually winning it 27-25.

PRCC found itself down 4-0 in the early part of the third set before fighting back to tie up the contest at 7-7. Jolee Gibson(Brandon) gave the Wildcats an 8-7 lead for a moment with an ace, but the Warhawks tied it back up right after.

The Wildcats took four straight points to go ahead 12-8 thanks in part to a huge Overstreet block and a thunderous kill by Smith.

Pearl River went up 16-12 soon after when a block by Anna Claire Sheffield (Canton; Jackson Academy) landed inches inside the line for the point.

The Wildcats took a six-point lead at 19-13 moments later when McNeely smacked a kill off the hand of a diving Warhawk defender and out of bounds.

The Wildcats made it a 22-15 game when Overstreet got a tip to fall in front of the unexpecting Warhawk players and eventually claimed the set 25-18.

Just like all of the previous sets, Coastal Alabama – East took an early lead over the Wildcats at 4-0.

A run of six straight points from PRCC helped it tie up the match and subsequently take the lead at 11-8. The run was highlighted by a pair of Bartholomew kills as well as a block and kill from Smith.

PRCC went on a four-point run not long after, using a Bartholomew ace to take a 17-10 lead.

Later in the match, Bartholomew grabbed another ace and Smith earned another kill to extend the lead out to 22-15.

A huge kill from Sheffield put the set to rest at 25-18, giving Pearl River its first victory of the 2022 campaign in the process.

Pearl River returns to action Saturday with matches against Mississippi University for Women and Pensacola Christian. The contests are set to get underway at 1 p.m.