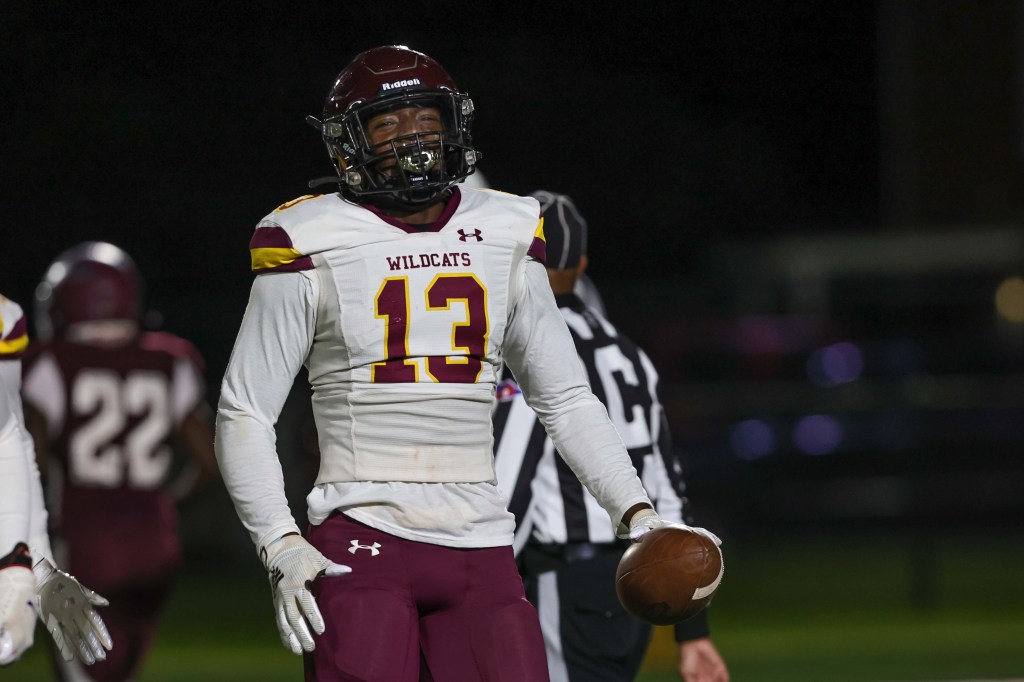 POPLARVILLE, Miss. — The Pearl River football season is set to get underway in just under a week. A season ago, the Wildcats showed flashes but weren’t able to pull it all together. Entering his third year at the helm of the program, head coach Seth Smith and his staff feel confident in every position group.

“This is the best that we’ve felt at every position since I’ve been here,” Smith said. “A lot of it has to do with two things. One is our experience as coaches in the league and the other is the experience that we’ve returned to the team. We’re finally old at each spot and we finally feel like the pieces of the puzzle are starting to come together.”

For Smith, expectations for the 2022 campaign are simple.

“The expectation at this point is pretty simple, to win,” he said. “We’ve now been here through two seasons. Every kid that we’ve brought here understands our culture. It’s to the point now where the product on the field has to match what we preach in here every day.”

The Wildcats will be one of the most experienced teams in the MACCC this season as they have a roster that features 31 sophomores and 10 redshirt freshmen.

“Any time that you have older kids, you don’t have to reteach things over and over because they understand it,” Smith said. “You can also use them as a vision when you’re teaching the younger kids. You can show them on film, do it like him. They can watch that and learn. In the past, we haven’t had that. We’re to the point now where we can show a younger kid our older players on film. We can teach from a visionary standpoint as opposed to just speaking it.”

A season ago, the Wildcats were one of the best rushing offenses in the country, finishing the year ranked fourth in the NJCAA at rushing yards per game (229.9). However, PRCC struggled to get things going through the air. The Wildcats hope to have a greater balance on their offense this season.

“I’m the first to admit that we’ve been porous in the passing game since we’ve been here,” Smith said. “Running the ball, we’ve had no issues. Both seasons we’ve been in the top three rushing, but we’ve got to have a balance. The goal this offseason was to create a balance on offense, throw the ball and run the ball. We want it to be 50/50.”

In an effort to fix the air attack, Pearl River’s staff brought in a pair of transfer quarterbacks in Samford transfer Lawson Pratt (Tuscaloosa, Ala.; American Christian) and Southwestern Oklahoma State transfer Manuel Armstrong III (New Orleans, La.; McDonough 35). The pair have been battling since the spring for the starting nod at the position.

“Both of those guys have been competing since this spring,” Smith said. “They’re both dual-threat guys who can run it and throw it which is good any time that you’re looking for an offensive balance. They both are coming from four-year schools, so they both know the grind. They both bring an aged experience that can hopefully benefit us at that position.”

At the running back position, the Wildcats will deploy a committee led by third-year running back Nick Milsap (Raleigh; Oak Grove). Milsap finished the 2021 campaign with 400 yards and a touchdown on 76 carries. Qavonte Swanigan(Foxworth; West Marion), who was a receiver last year, has moved to running back and will feature at the position as will redshirt freshman Shadamien Williamson (Waynesboro; Wayne County).

“Those three guys will split time and carries in the backfield,” Smith said. “We feel really good about all three of them. Nick’s product on the field speaks for itself and we feel like Shadamien and Q have both had a really good spring and summer and can help us. Nick is more of a downhill type of guy whereas the other two are shiftier backs.”

The receiver room is highlighted by Christopher Holifield Jr. A season ago, the converted running back tallied 19 carries for 188 yards and a touchdown.

“Chris is a power five guy. He’s got Olympic type speed and great hands,” Smith said. “He’s shown flashes since he’s been here, but hasn’t been able to pull it all together. That’s not all on him, but it’s on us too. We have to give him opportunities.”

“There won’t be as much rotating along the offensive line this year as there was a season ago,” Smith said. “We feel good about the five that we will roll out there. We really like all ten that we have, but we just won’t rotate them as much. We’re going to be bigger there this year which is going to help in the run and the pass game. This is the best that we have felt with our offensive line.”

The defensive line brings back a plethora of experience and will be led by 6-foot-4 Marquez Tatum (Mobile, Ala.; LeFlore) who signed with Grambling State out of high school. The Wildcats also return Bryan Whitehead II (Bartlett, Tenn.). The sophomore was primed to have a great campaign last season after registering a pair of tackles and a sack in his first game but suffered a season ending injury. Cameron Shaw (Vicksburg; Presbyterian Christian) featured in a few games last season but should jump right into the rotation this year.

At the linebacker position, Pearl River features one of the most sought-after JUCO prospects in the nation in 247 Sports four-star prospect and Alabama commit Justin Jefferson (Memphis, Tenn.; Bartlett). While Jefferson’s recruitment recently exploded, Smith feels that his biggest growth hasn’t been on the field.

“JJ’s play on the field speaks for itself, but the part that I am most proud of is his maturity off the field,” he said. “He’s really matured into a leader. He brings energy every day and he understands that he’s the focal point on that side of the ball. He does a great job of not bossing around but leading.”

Alongside Jefferson will be Eli Hackbarth (Birmingham, Ala.; Oak Mountain) who redshirted last season.

“We think that he’s going to do a fantastic job next to Justin,” Smith said. “I really think those two guys have an opportunity to be huge at that position this year.”

Other linebackers that will factor into the rotation are sophomores Davontez Lynn (Farmhaven; Velma Jackson) and Tyree Jackson (Hattiesburg; Oak Grove) as well as newcomer Ahmad Harmon (Poplarville).

The secondary is another position in which the Wildcats feature a big-time recruit as sophomore cornerback and 247 Sports three-star recruit Micah Cherry (Petal) is back to lead the charge. He is currently ranked as the ninth best JUCO prospect. Third-year cornerback Dajour Brown (Biloxi) and sophomores Hosea Singleton (Bay St. Louis; Bay), Chanton McCray (Taylorsville) and Keon Marion (Prichard, Ala.; Theodore) will also factor into the position group. Newcomers who look to feature at defensive back are Freddie Byrd III (Woodville; Wilkinson County), Kam Norwood (Hattiesburg) and Caleb Williams (Byram; Terry).

“It really starts with coach (Ta’Ron) Sims as far as our defensive backs go,” Smith said. “He does a fantastic job with that group. They’re another group that is old. Hopefully, that experience will pay off if we put them in the right spots.”

Michael Owens (Hattiesburg; Oak Grove) is back to handle field goals, PATs and kickoff duties. Last season, he went 6-for-11 on field goal attempts and 19-for-23 on PATs.

Kickoff and punt returners will rotate.

The Wildcats open the season at home Sept. 1 against Holmes. The game is set to kickoff at 7 p.m.

All-sport passes, season passes and single-game tickets for football are on sale at PRCCAthletics.com/tickets.

To help improve traffic flow and fan experience, PRCC athletics box offices will be cashless in 2022-23. Only credit and debit cards will be accepted at the box office. Fans are encouraged to beat the lines and purchase their tickets in advance.