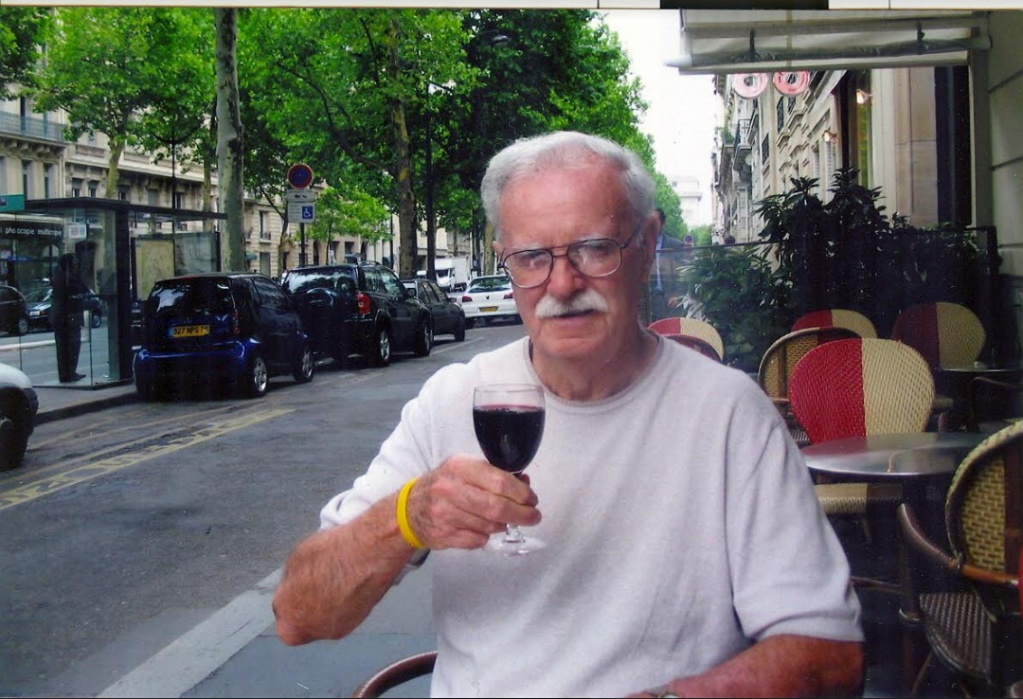 Patrick Offutt Curley, 91, passed away unexpectedly on August 23, 2022. A devout Catholic, he was the consummate family man: devoted husband of Germaine Ann Ballay Curley for 68 years prior to her death in 2020; the loving father of Micheline Alisa Curley Kirby (Michael), Kathleen Ann Curley Treadway (Calvin), Eileen Inez Curley Autin (Barry), Colleen O’Brien Curley Connell (Ron) and Vernon Patrick “Kelly” Curley (Zana); adoring grandfather of Patrick Allen Harvey (Amy), the late Alisa Capo Harvey, Edward Ezell “EZ” Kirby, II (Leigh Ann), Cynthia “Candy” Eve Treadway Vieira (Nelson), the late Cade Elliott Treadway, Cally Ellayne Treadway Hatten (Brent), Barry  Joseph “BJ” Autin, Jr. (Stefanie), Blake Christopher Autin (Rebecca) and Quincy James Curley; proud great-grandfather of Colin Patrick Harvey, Cohen Michael Harvey, Ella Louise Moll, Lilly Mae Moll, Edward Ezell “Teddy”  Kirby, III, an anticipated addition due this fall, Victoria Grace Vieira, Declan Patrick Hatten, Kellan Rue Hatten, Bryce Kaleb Autin, Carter Joseph Autin,  Cayden Nicholas Melerine, Nolee Esperanza Autin and Jax José Autin. He is likewise survived by his sister-in-law, Vivian Johnette Garnett Champagne (Larry), and many affectionate nieces, nephews and other relatives and friends. He was predeceased by his brother-in-law, Joseph Clem “J C” Ballay, III (Nancy).
Pat was a native of Lafayette, La. His father, James Belle “Jabe” Curley married Inez Ann Capo and they had 2 children, James Belle “Boy Blue”  Curley, (deceased) and Pat. Jabe died when Pat was just six years old. Subsequently Inez contracted tuberculosis and was confined to a special hospital in New Orleans. As a result, Pat went to live with family in Triumph, Plaquemines Parish, La. where he finished high school at Buras High. That is where he met the love of his life, Germaine. They were married in 1952.
Following high school, Pat enlisted in the United States Army and became a Pathfinder  Paratrooper with the 11th Airborne Division. He served in the Korean War and sustained battle injuries for which he received the Purple Heart decoration. Once a paratrooper, always a paratrooper.  For his 70th birthday Pat secretly planned and carried out his final jump by sky diving in Lafayette, La., much to the dismay of his wife and children when he called them after the jump and said, “Guess what I did today!” He was a staunch patriot participating in numerous flag raisings on national holidays and concluded each of his graces before meals with “and God bless the United States of America.”
Following the war and military service, Pat and Germaine returned to Empire, La. where he worked in the oil fields for Gulf Oil Co. and Chevron Corp. for 33 years. Shortly after retirement he and Germaine relocated to Carriere, Ms.
Pat was an avid amateur athlete. At times he was a prolific runner. Frequently he could be seen training by running about the small fishing village of Empire, La. when he lived there. He even participated in a marathon and ran across the causeway bridge over Lake Pontchartrain. Also, he was an accomplished cyclist. He would ride around southern Plaquemines Parish for fun and exercise but when he trained for the multiple sclerosis “Tour for the Cure,” he could regularly be seen biking over the high-rise bridge at Empire multiple times to prepare him for the 150-mile hilly course from Hammond, La. to the Percy Quinn State Park in McComb, Ms. and back. His exploits included a 480-mile pedal from Natchez, Ms. to Nashville, Tn. To top that, for his 80th birthday Pat celebrated with a 100-mile bike ride on the Tammany Trace-in one day. His most daring adventure, though, involved his sailboat “The Island Girl” which he sailed solo across the Gulf of Mexico from Lake Okeechobee Fla. to Empire La., a distance of six hundred miles. He documented this feat with a published book.
Pat was most proud of being a long-term cancer survivor.
Relatives and friends of the family are invited to attend the Mass of Christian burial on Saturday, August 27, 2022 at St. Luke the Evangelist Catholic Church, Fr. Jared Rodrigue officiating, 910 Cross Gates Blvd., Slidell, LA 70461 at 11:00 AM. Visitation at the church will begin at 9:00 AM. Interment will follow at a later date at the Southeast Louisiana Veterans Cemetery, 34888 Grantham College Dr., Slidell, LA. 70460. In lieu of flowers the family requests contributions to the Wounded Warrior Project, https://woundedwarriorproject.org or the Tunnel to Towers Foundation, www.T 2T.org.
Obituary, Register Book, and Driving Directions can be found on the internet page, at www.mcdonaldfh.com