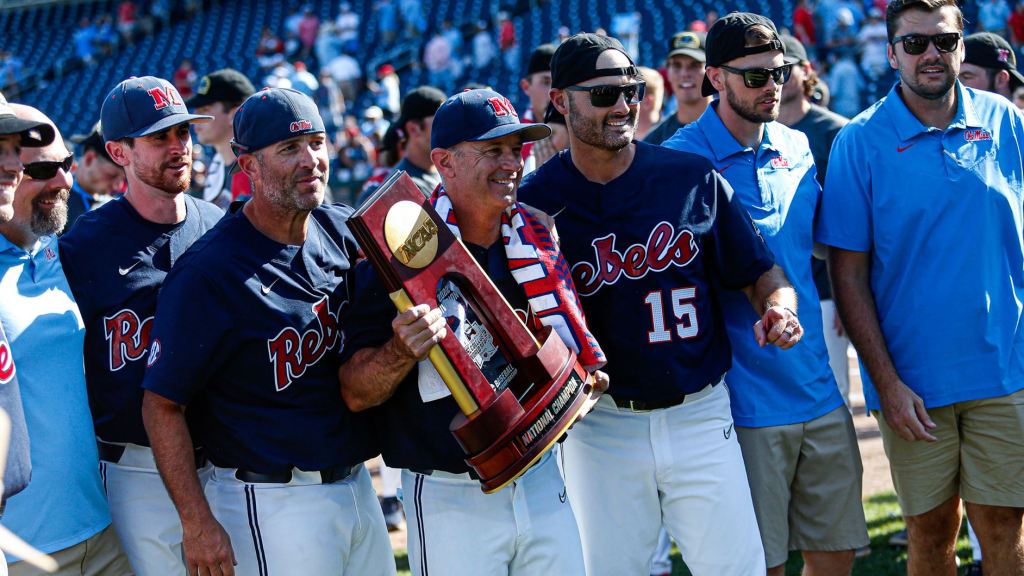 “We are blessed to have Mike Bianco as our head coach, and we intend for him to lead our baseball team for many, many years to come,” Carter said. “With his remarkable track record, no one was more deserving of that national title run than Mike. We have accomplished so much in every facet of our program, and under Mike’s leadership, we look forward to continuing that level of success and experiencing more championship moments.”

“I appreciate Keith, Chancellor Boyce and our Board of Trustees for proactively and aggressively getting this done,” Bianco said. “I am ecstatic about continuing to lead this incredible program with the support of a community that means so much to Camie and me. I’ve said it before and I’ll say it again, there is no better fan base in the country. We’ve always known that but after what you guys did in Omaha, the entire country knows it – Rebel fans showed up and made a difference! As always, none of this happens without the incredible players and coaches who have helped us build this program along the way. I can’t wait to see everyone back at Swayze next spring, and I am proud to be an Ole Miss Rebel.”

In 22 years at the helm, Bianco has led Ole Miss to unprecedented heights, including capturing the 2022 national championship, the first NCAA men’s team title in school history. Deservedly so, following the season, Bianco was named the National Coach of the Year by D1Baseball, the American Baseball Coaches Association and Collegiate Baseball.

During his tenure in Oxford, Bianco has accumulated a record of 854-485-1, giving him the third-most wins all-time as the head coach of an SEC program behind only Ron Polk and Skip Bertman. Bianco owns 954 Division I wins during his 25-year head coaching career, ranking as the 10th most among active head coaches.

While reaching the pinnacle of the college baseball world this year, Bianco has filled the trophy case throughout his time in Oxford. The Seminole, Florida, native has led the Rebels to four SEC West Division titles, the 2009 SEC regular season championship and a pair of SEC Tournament titles in 2006 and 2018. Bianco’s squad ranks top-4 nationally in wins over the past four full seasons.

Under Bianco, the Rebels have never failed to cross the 30-win plateau, posting 40 or more wins in 10 seasons. The veteran skipper has guided Ole Miss to 18 postseason appearances, including eight Super Regional berths and a pair of trips to the College World Series.  Ole Miss is one of four programs nationally to appear in a Super Regional each of the past three full seasons and the only one of those programs to win a national championship over that period.

During Bianco’s time at Ole Miss, Oxford has become a college baseball destination. Oxford-University Stadium/Swayze Field has ranked inside the top-5 in the nation in average attendance for 16-consecutive seasons, including a No. 1 ranking for the 2021 season. Ole Miss has hosted an NCAA Regional 10 of the last 18 seasons, one of only six programs to do so.

Keep up with all the latest news and information on the Rebels by following Ole Miss baseball on Twitter at @OleMissBSB, on Facebook at Facebook.com/OleMissBaseball, on Instagram at Instagram.com/officialolemissbsb and on TikTok at @olemissbsb. Also, follow head coach Mike Bianco on Twitter at @CoachMikeBianco.