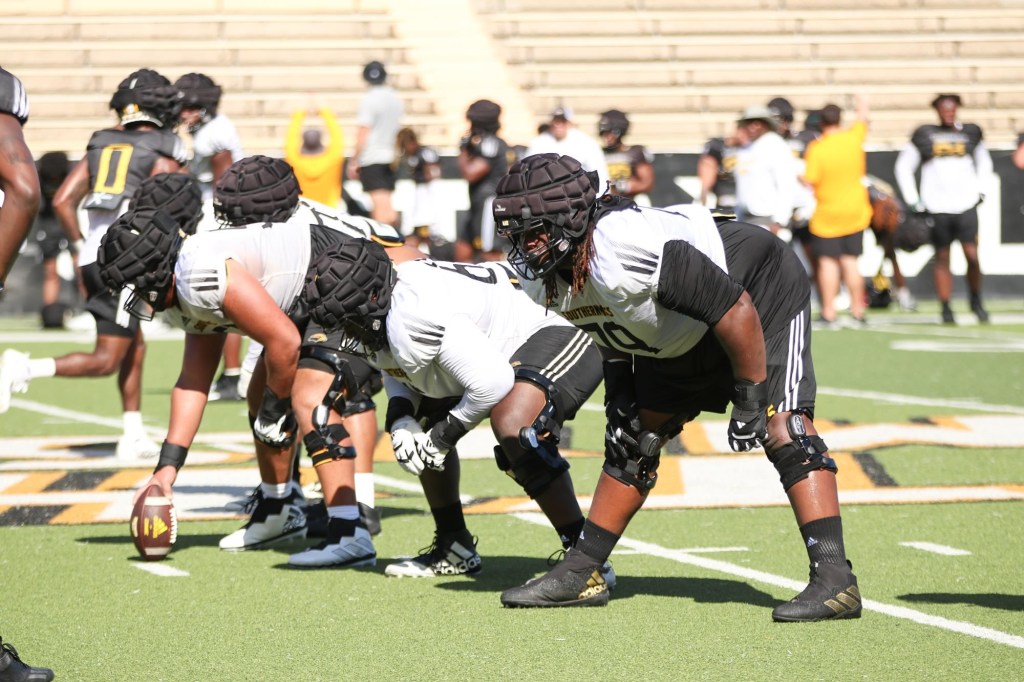 HATTIESBURG, Miss. – A well-run Will Hall offense establishes the run while being efficient in the passing game.

A big part of that equation resides in the offensive line, where the Golden Eagles look to be much improved this fall.

Like the entire squad, the numbers are up in personnel along the offensive front with the Golden Eagles having built their roster back to 85 scholarships, enabling this position group to grow during fall camp.

During the first four days of preseason camp, including the last two days in shoulder pads, the Golden Eagles have been able to utilize three different rotation groups to run through repetitions, which is something they were unable to accomplish a year ago due to the numbers.

“We have three rotations of scholarship guys, too,” said Hall after the first day of practice. “Not just bodies. We recruited really well. Now we are young, but we are young and talented.”

Another aspect of this unit’s maturation is the addition of Sam Gregg as offensive line coach this season. Gregg grew up with Hall in Amory, Miss., and was most recently on the Liberty offensive staff the last three seasons.

“I am excited about having Sam (with us),” said Hall. “Sam is a guy that’s like my brother. He can complete my sentences because he knows how I think. He knows how I want things to be and he’s a proven commodity on multiple levels. Everywhere he has been, they have broken offensive school records. He and I were a part of that together for a long time and, most recently, he was at Liberty where they set records that no one ever thought would get broken.”

Gregg brings with him to Hattiesburg a wonderful gift of teaching his young and improving group of players. In fact, Hall calls him a “phenomenal conceptual teacher.”

The message was clear from the very first day from Gregg, according to Hall.

Gregg told his players from the get go that they needed to play harder. He added that those returners may thought that they played hard, but they didn’t and that has to change.

With preseason camp less than a week old, the progress has been evident not only on the field, but also on the sidelines, where the players continually communicate to each other after each set of reps they get to discuss what they did right and what they did wrong. In short, they want to get better and this is a way that they are doing that.

Or, as Hall stated over the weekend, another step in Southern Miss football going from a coaches-led to a player-led program.

Season tickets for the 2022 home schedule are available by visiting SouthernMissTickets.com, by calling 1-800-844-TICK (8425) or by visiting the Pat Ferlise Ticket Office, weekdays, during normal business hours.