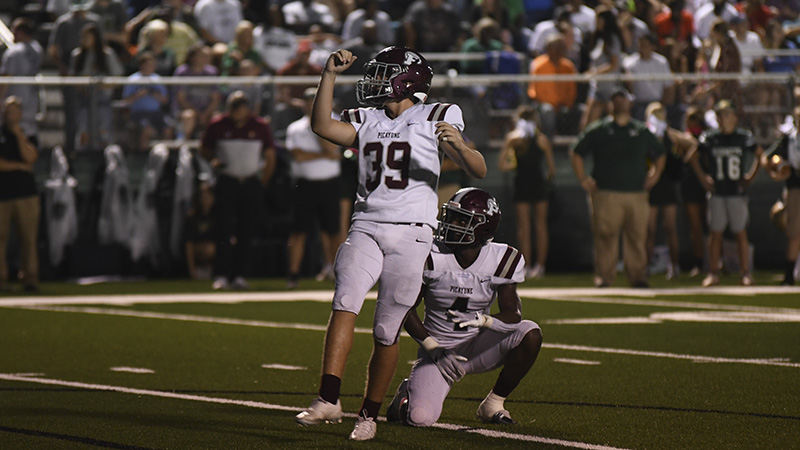 Morgan Craft kicks the PAT for the Maroon Tide after the team's first touchdown in their 21-7 win over Poplarville. Photo by David Thornton Jr.

Friday night football was in full effect as the Poplarville Hornets hosted the Picayune Maroon Tide. Picayune came out on top 21-7 clinching the team’s first win of the season.

The Hornets received the ball to open the game but kept it for only three plays.

The Maroon Tide’s first possession of the night began on the 47-yard line. Brady Robertson then completed a first down pass to Darrell Smith. The Maroon Tide also picked up four first downs on their way to their first touchdown of the night. It came from none other than Dante Dowdell for a short goal line score. Morgan Craft’s PAT was good putting the Maroon Tide in the lead 7-0 in the middle of the first.

The drive covered 19 plays for 53 yards.

Poplarville dealt with another three and out and had to punt the ball back to Picayune.

Picayune ran one play for a couple yards to end the quarter.

In the second quarter, Picayune made it all the way to the Hornets’ 36 yard line but a wild pitch to Dowdell ended in a fumble on 4 and long. The resulting turnover on downs gave the ball to the Hornets.

The fumble bug hit Poplarville on the first play and Picayune recovered on the Hornets’ 32 yard line.

Another mistake by Poplarville led to the Maroon Tide’s success as Dowdell trucked over a defender and scored a 23-yard touchdown.

Picayune led 14-0 with five minutes to play in the half.

The Hornets came up empty in their next drive. They did successfully pick up a first down but nothing more.

The punt put the Maroon Tide in their own 11- yard line with 1:40 to play before half.

The Maroon Tide had a methodical drive capped by a Davis 43-yard run to set up the Maroon Tide’s next big play. Robertson took the ball from the 43-yard line and threw a bomb to Jessiah Contee for a touchdown. The touchdown ended the half in Maroon Tide fashion, putting the team up 21-0.

The drive spanned 4 plays and 89 yards.

Poplarville got their first touchdown in the fourth quarter. Through seven plays and 55 yards the drive was capped off by a 32-yard Marcus Travis run to put the Hornets on the board with 11 minutes to play.

Poplarville Head Coach Jay Beech said, “if we wouldn’t of gave up that score before half time that would have been big… they were a good football team but I think we’re a good team too. We battled back in the second half but came up short. But we’ll live another day.”

Beech said his team showed a lot of toughness, a trait that can help a team go a long way.

Picayune Head coach Cody Stogner said, “It was a really big difference from the first and second half. First half we were clicking on all cylinders. They’re a good football team and we knew they weren’t going to lie down on us. We did a lot of things uncharacteristic, I blame myself and take full responsibility for that. There a lot of things we need to clean up on and we’re going to get better at on Monday.”

Next Friday at 7:30, Picayune plays at Jefferson Davis and Poplarville plays at home against Pearl River Central.