Marks And Johnson Have Grown Together In The Air Raid 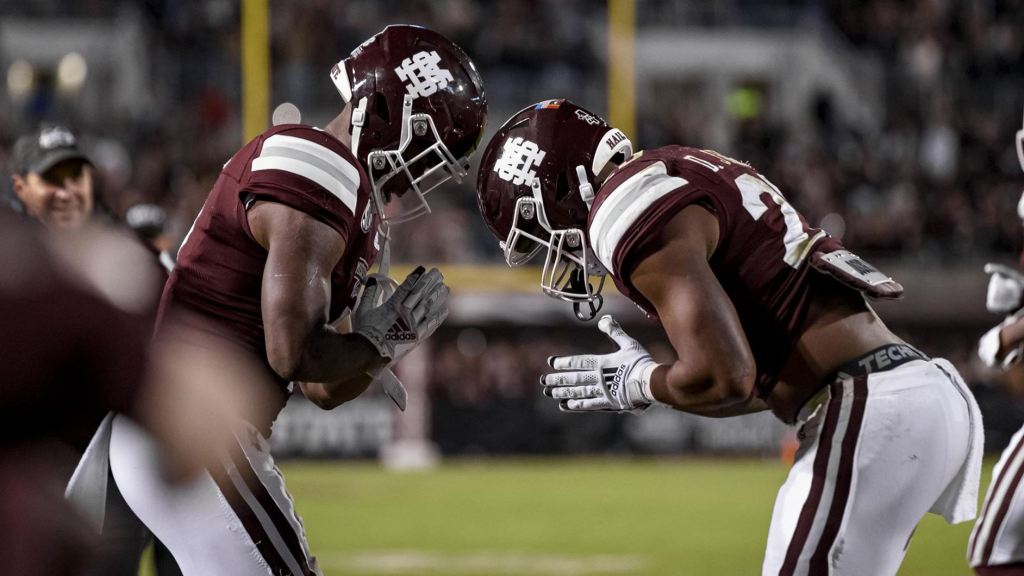 STARKVILLE – Time flies. It’s been said before that the days are long, but the years are short.

It has to feel that way for Jo’quavious Marks and Dillon Johnson – Mississippi State’s two veteran running backs. Marks and Johnson are currently going through their third preseason training camp in Maroon and White. It almost doesn’t seem possible.

Not all that long ago, the two were Bulldog pups just getting familiar with head coach Mike Leach‘s Air Raid offense. In the blink of an eye, Marks and Johnson have developed to the point where they’re two of the most well-balanced, talented running backs in the country as evidenced by both players’ inclusion on the 2022 Doak Walker Award watchlist – a listing of those being considered for the honor given to the top running back in college football.

These Bulldog backs are established. They’ve been through the wars. The pulse doesn’t pound so much now in the lead up to a new season. It’s all about refining and growing. At this point, there’s even some mentoring.

“It’s just common now to come [to practice] and handle business and help out others in our group,” Marks said. “We’ve got some new running backs, so we’re helping them out and making sure they know everything on the field and helping them with their game and picking up their game.

“I feel like we’re coaches. Just teaching [Ke’Travion Hargrove] and those other guys stuff…We know a lot from being here over the years.”

Hargrove, Simeon Price and other younger MSU running backs can certainly learn from the two men who have gotten the bulk of the carries and catches out of the State backfield the last two years. Marks and Johnson have put on a clinic for how crucial running back play is in the Air Raid. In a system where quarterbacks and receivers understandably draw many eyeballs, Marks and Johnson have each demonstrated how running backs are just as big a part of making the offense click.

In the Air Raid, running backs are do-it-all performers. That’s precisely what Marks and Johnson have turned into as they’ve worked tirelessly over their time in Starkville. Just look at the last two seasons’ numbers to see it.

Since 2020, Marks and Johnson have combined for 1,438 rushing yards and 17 touchdowns on the ground. Through the air, they’ve accounted for 1,349 yards and four scores. Marks has led all of FBS football in receptions by a running back the last two seasons. Last year, not only was Marks tops on that list, but Johnson was third in the country.

Those figures illustrate how the football is always in the hands of State’s running backs. What they don’t tell you is how good Marks and Johnson have gotten when the ball isn’t in their hands.

Want to know part of the reason quarterback Will Rogers was able to smash all kinds of records last year? Look no further than the development of Marks and Johnson.

“If you can’t pass block, you’re not going to be out there – that’s the bottom line,” Johnson said. “We take a lot of pride in that. I think that’s the biggest piece that for me and Woody [Marks], we’ve grown from our freshman year to now. Our pass protection has gotten so much better, just recognizing what the coverage is and recognizing what defenses are doing before they do it.”

Adds Marks: “It takes a special running back [to play in the Air Raid]. Sometimes you have to get in the trenches and block a linebacker. You might have to block a D-end.”

And block these two do. And catch. And run. And they do it all incredibly well. Marks and Johnson love doing it all too, because it allows them to show off how truly versatile they are. They’re not boxed in. They get to put on display every tool in the running back toolbox.

In 2022, Marks and Johnson are determined to take their games up another notch. Running backs coach Jason Washington is aiding in that process.

You might recall Washington was State’s safeties coach a year ago but has now flipped over to coaching on the offensive side of the football. But you better believe Washington’s past is helping him in his present post as he tries to get the most out of Marks, Johnson and the rest of MSU’s running backs.

“Coach Washington brings a lot of energy to the table and meetings,” Marks said. “He knows defense well [so] he gives us tips [to pick up] when they’re blitzing, when [a defender] is about to overrun something, [things he knows] from him teaching safeties…It’s a lot of stuff he knows from being a DB coach that he teaches us to see when we get out in the open field.”

Marks and Johnson are listening, and Washington is loving what he’s seeing.

“To be honest, I think they’re playing at a different speed,” Washington said of Marks and Johnson. “I think just watching them and reevaluating some things that went on last year, I think there were some times there was a little bit of hesitation or some things like that and we’ve said now, ‘Hey, let’s just go’, and we’ll figure out and correct the mistakes from there. That comes with experience, and I think both of those guys have been doing good.”

Improved versions of Marks and Johnson should surely get Davis Wade Stadium up and rocking once the season is underway. Whether it’s Johnson rushing for a key first down or Marks catching a pass and sprinting for the end zone, the two will have the cowbells clanging in Starkville.

And maybe the coolest part of it all? Neither guy seems to care who gets the glory. They came to MSU together. They’ve played alongside each other. And they count each other as among each other’s biggest supporters.

“We just make it work. We’re bros. We go out there and do our thing.”