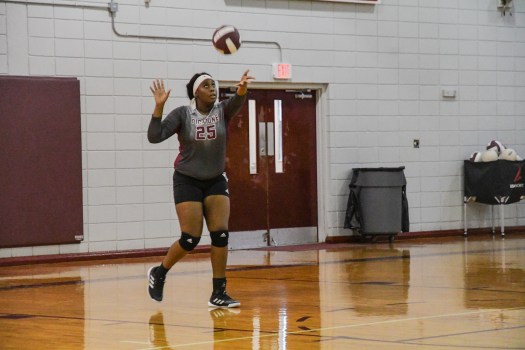 Amiyah Marks serves an ace that drove the Lady Maroon Tide's momentum to a 3-0 sweep over the Bay High Tigers on Tuesday, Aug. 9. 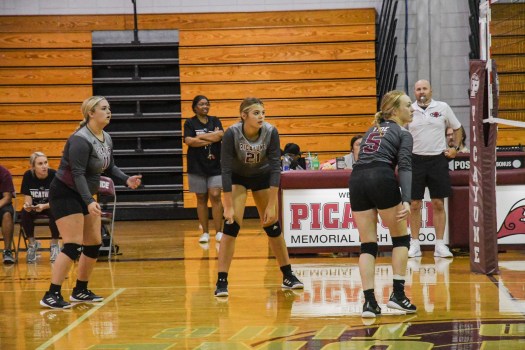 After dropping the season opener, the Picayune Lady Maroon Tide volleyball team rebounded with a sweep against the Bay High Tigers on Tuesday. This was the team’s first home game of the season and the performance did not disappoint Maroon Tide fans.
In set one, the Lady Maroon Tide earned a 10-3 lead through Amiyah Marks’ two aces and a big block by Annaleigh Robbins. Picayune won the first set 25-17 where aces came in bundles, Hayley Pascal had one and Barcley Martinez three consecutive aces.
In set two, the Lady Maroon Tide trailed the Tigers the first half of the game 5-2, but some hard competitive play by the Lady Maroon Tide tied the game at 12-12 through an ace from Brooklyn Wilson, Marks and Martinez, along with kills from Martinez and Robbins. The game stayed close until the very end. Wilson grabbed the lead with a kill, putting the score at 16-14, and Kaigyn Kulas assisted Robbins for a kill to bring the score to 17-16. Martinez got another kill for her team when they trailed 23-21. The game eventually became tied at 23-23 but an ace from Robbins and kill by Marks clinched the Lady Maroon Tide’s second set win.
Set three was dominated by the Lady Maroon Tide. They started off strong, taking a 5-0 lead. A kill by Wilson and an ace by Marks pushed the team’s lead to 7-1. The scores through out the set reached 11-4 after a Robbins kill, 15-5 after a Wilson ace, and 18-8 after a Marks kill. The Lady Maroon Tide led 24-12 when Resse Sorrells ended the game with her own ace.
The Lady Maroon Tide racked up 8 assists and 12 kills on the night. They played with noticeably more confidence and were in better sync compared to the season opener.
“It was good to see them make the adjustment,” said Head Coach Courtney Dickens. “We really talked about putting the ball down more, last night we didn’t do that, we were acting like we were scared to swing, so we really drilled that into their heads tonight.”
Dickens said making these and several other adjustments really helped them win, along with the energy the team produced. She was proud that the players executed the small adjustments.
Next, the Lady Hornets will be back home on Thursday night to host the Purvis Tornadoes at 6:00 p.m.