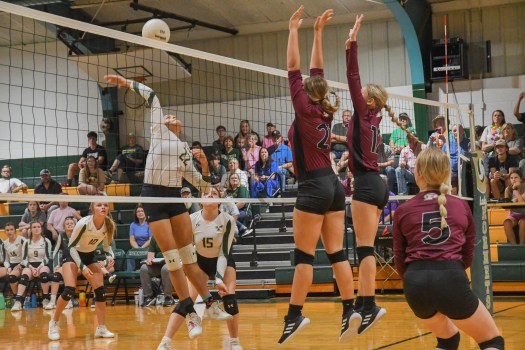 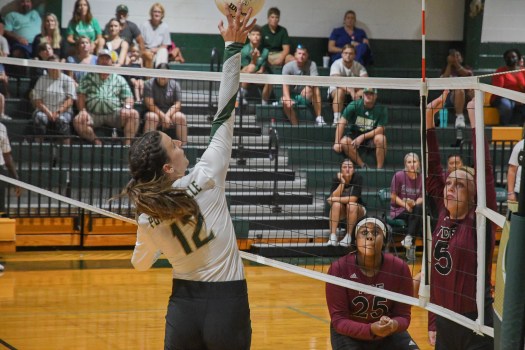 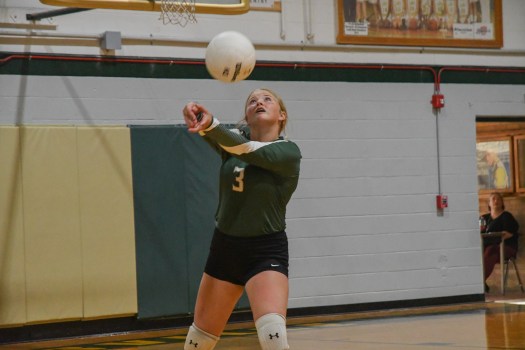 Monday night was the first game of the 2022 volleyball season for the Poplarville Lady Hornets and the Picayune Lady Maroon Tide.

The Poplarville Lady Hornets beat the Picayune Lady Maroon Tide in an exciting opening match that ended in four sets.

Set two was also taken by the Lady Hornets. Poplarville started with a dominant 9-0 lead before the Maroon Tide stopped their run with a kill. An attack block by Lady Maroon Tide’s Reese Sorrells made the score 10-2. The Lady Hornets continued to dominate the set, increasing their lead to 22-14 after a kill hit from Burts. The Lady Hornets took set two with a score of 25-16.

The Lady Maroon Tide bounced back in set three, starting just like they did the first set with an early 11-4 lead. Hayley Pascal picked up four aces during that run, three of which were consecutive. A long rally narrowed the Lady Maroon Tide’s lead to 11-7. They increased the led to 17-13 after an ace, then to 21-15 after Barcley Martinez’s kill hit. Picayune goes on to win the set 25-21.

Set four was a tight start, with both teams going back and forth up to a 14-11 Lady Hornets lead. Then, Poplarville’s Rayelin Davis got a kill hit, followed by Picayune’s Sorrells playing her own kill hit and Annaleigh Robbins making an attacking block to bring the deficit to 15-13. But the Lady Hornets took control, going on a 6-1 run. There was another long rally that ended in the Lady Maroon Tide’s favor. This made the score 24-15. They scored again but an error gave the Lady Hornets the last point and the season opener win over the Lady Maroon Tide with a score of 25-16.

Picayune’s Head Coach Courtney Dickens said she thought her team could of done a lot better. She also felt they played a little timidly, had some first game jitters, and Poplarville’s student section provided a hostile atmosphere, which could have been a factor as well.

“I think we got beat because they were putting balls down with swings and we weren’t… I think we need to put more swings on the ball and put the ball down more, because when we did we were pretty successful with it,” said Dickens.

All in all Dickens saw things that need adjusting and hopes they can fix the issues before facing Bay High at home on Aug. 9 at 6:30 p.m.

The Lady Hornets finished with 33 kills and 15 aces. Poplarville’s Head Coach Amanda Ladner said the Lady Hornets were very happy with getting their firs­t win.

“This is a big win for them,” said Ladner. “Second set was my favorite set. I think we looked the best in our second set. First set was a little nervous, third set we kind of fell back a little bit but overall I’m very pleased.”

The Lady Hornets will be on the road against Sacred Hart Thursday, Aug. 11 at 6:30 p.m.