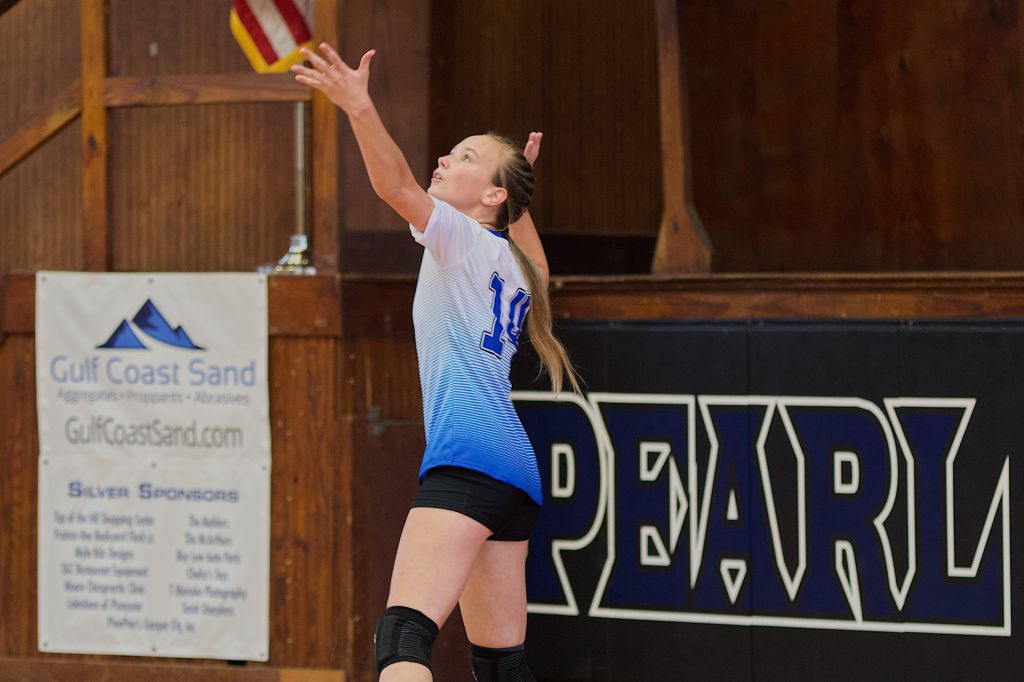 On Thursday night, the Pearl River Central Lady Blue Devils clinched a hard fought win over the Lumberton Panthers. PRC battled in five sets for their second win on the season and first senior night win in the program’s inaugural season.

“I loved playing in our house, we set the tone and I enjoyed it,” said volleyball Head Coach Nicole Brown.

In set one, the Lady Blue Devils took an early 8-2 lead after receiving three aces from Autumn Craft. At 14-9, Isabella Martin took control of the set, acing six serves in a row to extend her team’s lead to 20-9. An ace by Craft and several Panthers’ errors assisted in the final score.

Set two was another good start but PRC was challenged towards the end of the set. They had a 10-5 lead that condensed into a 22-21 lead. Luckily a Panthers’ error, bump score by Leigha Trahan and an ace by Marley Carle closed the set with a win.

What looked to be an easy sweep turned into a long night of volleyball. The Panthers leveled the series after winning the following two sets, 25-20 and 25-23.

In set three, the Panthers tied the game for the first time at 11-11. The Panthers were able to tie off kills and opponent errors, putting their lead to 22-17.

Two aces by Martin cut the deficit to 24-20 but the Panthers closed out the set with a kill.

Jade Bennett served four aces in a row to tie the game at 15-15.

The Panthers did just enough with two aces to run away with the set.

The game was tied 4-4 in the final set. The Lady Blue Devils led 10-6 after a Carle ace. The Blue Devils did the best they could to keep the Panthers at bay, closing the game with an ace by Trahan and a Panthers error.

When asked about her team’s grit in shutting down the Panthers’ attempt at a comeback, Brown said the team loves and encourages each other to do great.

“When it comes time to win they set goals, they meet them, and they accomplish whatever they set out to do. Together that varsity team said ‘we will not lose in our house tonight,’ and they did not,” Brown said.

Throughout the game, the Lady Blue Devils had a high number of consecutive aces. Brown said severing was in the night’s game plan. She credits her players for having the great ability to place the ball in open areas.

Next, the Lady Blue Devils will play the Stone Tomcats in Wiggins on Tuesday, Aug. 23 at 6:30.