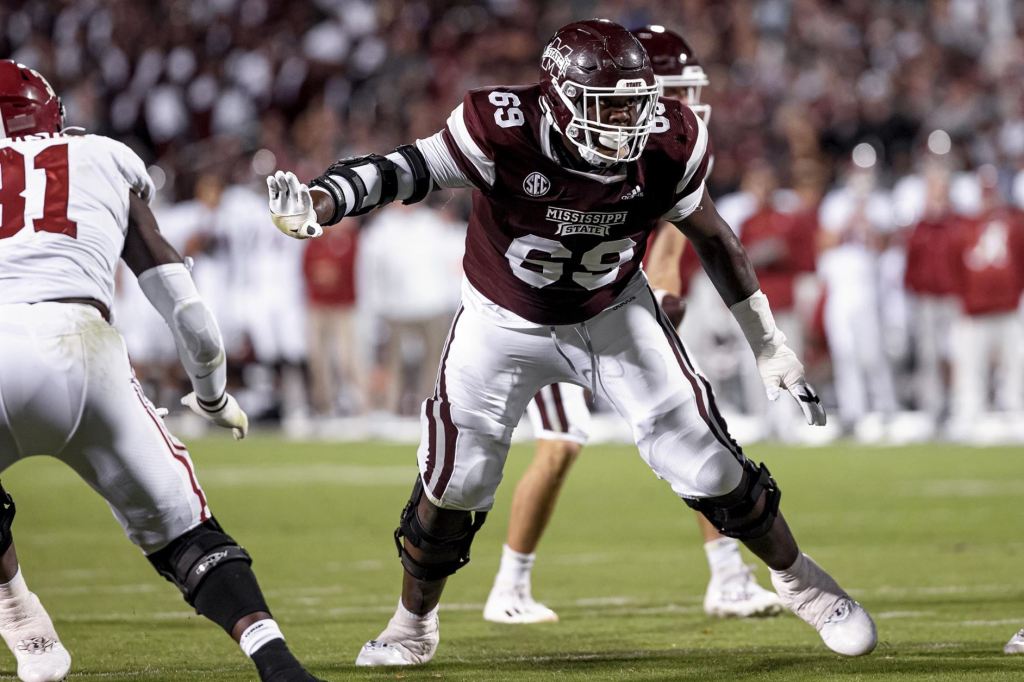 STARKVILLE – Kwatrivous Johnson has basically been money since the day he was born.

When Johnson came into this world on Dec. 1, 1999, his grandmother Mary thought her new grandson’s name might be too hard to pronounce and decided to come up with a nickname to call him.

It just so happened that the movie “The Players Club” was playing on the television in the waiting room while Johnson was being delivered. Mary chose the name “Dollar Bill” after Bernie Mac’s character in the film.

“It just stuck with me since I was a child and has kept going with me up until now,” Johnson said.

Little did Mary know that her newborn grandchild would one day grow into a mountain of a man that is expected to anchor Mississippi State’s offensive line.

But the 6-foot-7 Johnson isn’t quite as large as he once was. He arrived at MSU as a freshman in 2018 weighing 380 pounds but has since shed over 60 pounds and is now at 312 as he starts fall camp in Starkville.

“I came in fresh out of high school at 380,” Johnson said. “I got up that high and one problem I had trying to lose all of that weight was to stop eating late at night and watch what I’m eating. Coach (Tyson) Brown and (his staff) stayed on me every minute telling me what I needed to eat and drink and I felt the improvements going into and throughout the last two seasons.

“When I first came in, I used to be tired all the time and sluggish. They’ve taught me a lot about my body and what I need to consume for my body. Now I go in there fully energized and ready to go.”

The coaching staff has noticed a difference in Johnson’s endurance and mobility in camp as well.

“He’s just sort of put it all together and gotten his body better,” said head coach Mike Leach. “He’s lost weight and tightened it up. It’s really kind of clicked for him and he’s more consistent.”

Johnson brings 23 games of experience with him into his senior season. He has made 11 career starts, including eight last year at right guard. He graded out as the Bulldogs’ top run blocker in the season opener against Louisiana Tech and followed up as the team’s best pass blocker in the LSU game according to Pro Football Focus.

This year, Johnson is vying to be the Bulldogs’ left tackle and began honing his craft at left tackle during spring drills.

“Throughout the spring, I learned every day and it started to get easier,” Johnson said.

Johnson is continuing to polish his skill set early on in fall camp and getting more comfortable at the position by the day.

“It’s all about confidence and he’s getting a little bit of it,” said offensive line coach Mason Miller. “We’ve just got to continue building on it.”