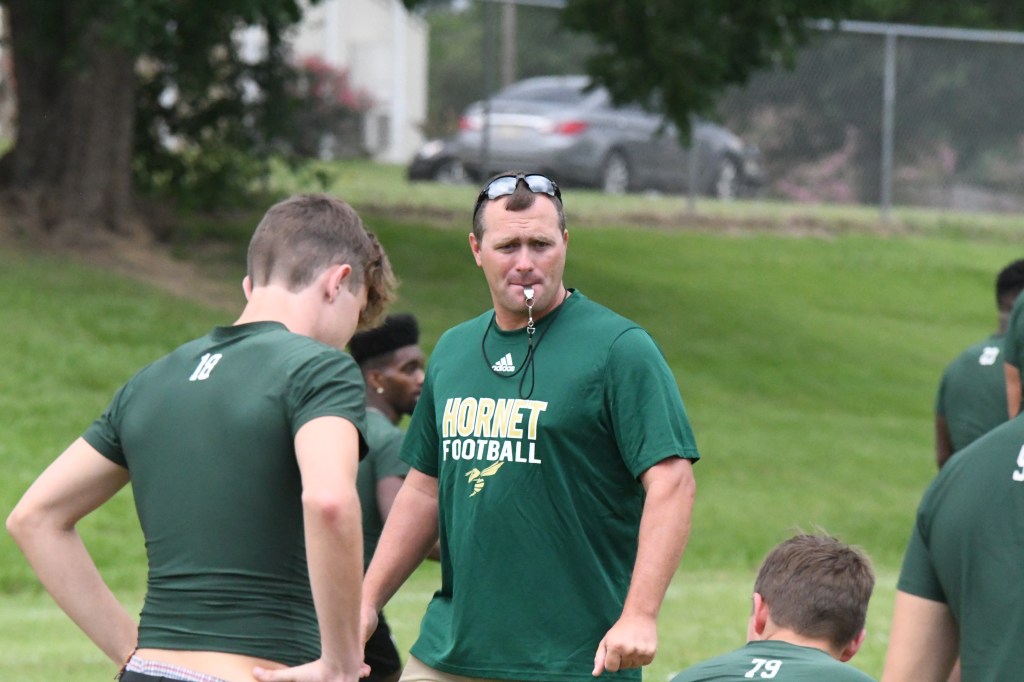 Poplarville’s football Head Coach Jay Beech said the excitement level for the 2022 season is a, “10 out of 10” and the entire team is excited to play football again.
The Hornets are coming off an 11-3 season and 4-1 in district. Poplarville fell short to the Columbia Wildcats in the final four game, 12-7. It’s a new season but the Hornets’ goals are the same.
“Our goals are what they are every year. We try to break our season into thirds. First part of the season is our non-conference, and our goal for that is to get better every weekend and obviously finish with a winning record. Second part of our season is our district schedule and our goal is to win the district championship. And then the third part of our season is the playoffs and obviously our goal is to win a state championship,” Beech said. “We’re going to set high goals and we’re going to try to accomplish them.”
During the Hornets’ off season they train in preparation for that first phase of the season. Beech felt that during last year’s outing, his team wasn’t well polished offensively, nor did he feel they had enough mental toughness to beat the Wildcats in the final four- game. That, and tweaking other parts of the game like conditioning, was a major focus in furthering the team’s improvement.
“We got to be in shape first, you cannot just roll into August 8 the first day of practice and be out of shape. So when August 8 comes you can thrive in practice and not just survive,” said Beech.
He has no worries about his team’s conditioning come Aug. 8.
“The summer’s been good, and we’ve had good attendance… we have a lot of confidence going into this year,” said Beech.
That confidence will rest upon the shoulders of the Hornets 19-player senior class.
Nineteen seniors is plenty of returning experienced athletes so Beech is expecting a lot out of all of them.
“We’re real excited. There are high expectations for this senior class, as high as they can get,” Beech said.
The Hornets have a huge season opener matchup on Friday, Aug. 26 against top five 5A Mississippi team and county rival, the Picayune Maroon Tide.
Senior running back Maurice Travis and senior defensive back William Harry said the team is ecstatic to play Picayune. They spoke for the team’s hunger and motivation to start the season off right by knocking off their rival.
Since entering the program as a freshmen, Travis has had his eyes set on a state championship, and says this team is more than capable of doing it this season.
Harry echoed Travis championship aspiration saying,
“Just work hard, bond together as a team and go out there and put our fullest out on the field, I feel like if we do that then we’ll be unstoppable. If everybody plays their hardest then we are unstoppable.”
Travis said over the summer everyone’s gotten faster and stronger, and the team is bought into Beech and the programs plan.
Harry said on a nightly basis the Hornets community is going to see hard nose football, and Travis simply said their going to see a win.
“We going to try and win every night,” said Travis.
Harry added if they loss they will learn from it, work harder the following week of practice and bounce back with 100 percent effort the next game.
When asked how far this team can go, Beech said,
“We’re a state championship caliber team. There is a lot that has to go into that… it’s up to our kids and coaches on how far we want to go. We’ve been in the state championship game four times and I think this team is as good as any of those.”