Although delayed, look out for annual fall armyworm arrival 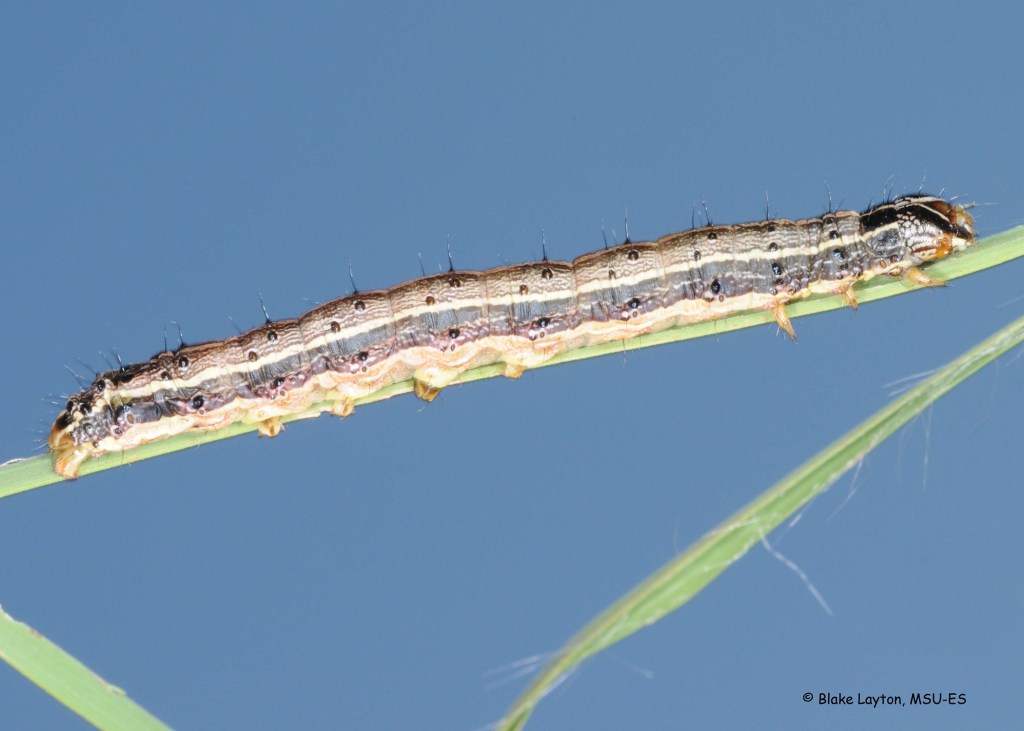 STARKVILLE, Miss. — Mississippi pastures, hay fields and lawns are threatened annually by fall armyworms, and close observation and quick action are the only ways to successfully battle the pests again this year.

Keith Whitehead works in Franklin County with the Mississippi State University Extension Service. He said no one knows each year how bad the fall armyworm problem will be or when the insects will show up.

“They’re going to show up eventually. They always do,” Whitehead said of this potentially devastating pest. “It may be as late as September, but they move north from South and Central America.

“We talk to our Louisiana friends to get an idea when they start seeing them. When we get the coastal reports, we know they are a week or two away,” he said.

In 2021, the caterpillars showed up in hay fields the first week of June, which was earlier than usual. Many of last year’s armyworms were resistant to typical control methods, and growers had to spray with different chemical combinations to manage the pest in their fields. The early arrival of fall armyworms drives up costs to producers.

Hay producers, pasture managers and home lawn owners can treat their land to effectively control these pests, but fall armyworms do not reside only in these areas.

“There are other places for these insects to be, like roadsides and non-farmed areas,” he said. “We’re not treating the whole county, just our production fields. Fall armyworms mature, pupate and turn into months, then return to our fields.”

Specialists urge land managers to be ready for the arrival of fall armyworms, which means watching for the earliest signs of their arrival and having chemicals on hand to treat for the pests.

Blake Layton, an Extension entomologist, said it is noteworthy that significant numbers of fall armyworms have not appeared in the state by the end of July.

“After last year’s unusually heavy and widespread fall armyworm outbreak, hay producers and turf managers are understandably anxious about what this year may hold,” Layton said.

Pyrethroid chemicals make up the first line of defense against fall armyworms. However, some growers experienced control difficulties with pyrethroids last year, while others did not.

“Although this may have been partly due to the unusually high populations and continued egg-laying pressure experienced last year, pyrethroid resistance does occur in some fall armyworm populations,” he said.

Layton recommended that hay producers who experienced control difficulties with pyrethroids alone last year may want to use a higher rate and tank mix the chemical with one of the insect growth regulator products.

“Growers who are especially concerned about control failures with pyrethroids should consider using an alternative such as chlorantraniliprole,” he said.

“These treatments are certainly more costly than just using a low rate of a generic pyrethroid, but one does not have to save much high-quality hay to more than justify the increased cost.”

Those who manage commercial turfgrass had a busier than usual year in 2021 controlling fall armyworms, but they were successful in most cases controlling the pests using traditional methods.

“This is likely because pyrethroid application rates are usually higher in turf and coverage is much less of an issue,” Layton said. “Caterpillars are a lot more exposed to direct spray in a 2-inch-tall lawn than in a 6- to 8-inch-tall hayfield.”

Control cost is less of a concern in turf situations, such as on a golf course or sports fields, so turf managers are more prone to use full rates of the more costly, more effective treatments.

Homeowners can protect lawns attacked by fall armyworms with pyrethroid sprays and other recommended treatments available at farm cooperatives or outdoor supply stores. Granular insecticide formulations are not as effective at controlling fall armyworms, so homeowners are urged to avoid these products.

The MSU Extension Service has a variety of publications that provide specific, detailed advice on when and how to treat areas for fall armyworms and a variety of other pests of grasses and forages in the state. These publication are available via a keyword search at http://extension.msstate.edu/publications.

Available titles include Publication 1858, “Insect Control in Commercial Turf;” Publication 2717, “Fall Armyworms in Hayfields and Pastures;” and Publication 2331, “Control Insect Pests in and around the Home Lawn.”