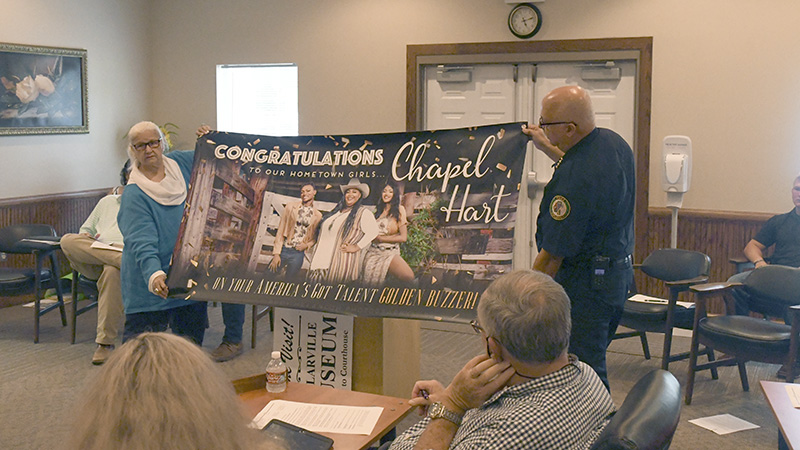 From left, Mayor Louise Smith and Police Chief Daniel Collier show the members of the Poplarville Board of Aldermen a banner that was donated to the city in celebration of local country music group Chapel Hart earning a Golden Buzzer while performing on America’s Got Talent. Photo by David Thornton Jr.

During Tuesday’s regular meeting the Poplarville Board of Alderman, the Board accepted a banner donated from Rudy Melancon and Micah Bounds-Melancon in honor of Chapel Hart. The banner is dedicated to the hometown country music group who recently received a Golden Buzzer on America’s Got Talent. The banner will be hung outside City Hall.

The Board accepted a single bid from Terry Carver in the amount of $146,444 for the old Poplarville Police Department building located at 305 Highway 26 East.

In other business, the Fire Department was approved to move a part time worker to temporary full time status. Fire Chief Jason Bannister has a full time firefighter deployed in Alaska for 10 months, so the changes was needed to fill that position until his return.

Chief Daniel Collier was approved to pay $2,294.59 to Comm-Tech Solution to transfer cameras from the former police station to the department’s new location.

Two event requests were also approved. The Poplarville Area Chamber of Commerce was approved to host a Pumpkin Patch at the Town Green on Oct. 1 2022 from 5:30 until 7:30 p.m.

Poplarville Upper Elementary was also approved to host a fall festival at the Town Green with crafts food, art and educational booths to answer public questions about PUE. This event will be held on Nov. 5 2022 from 7 a.m. until 5 p.m.