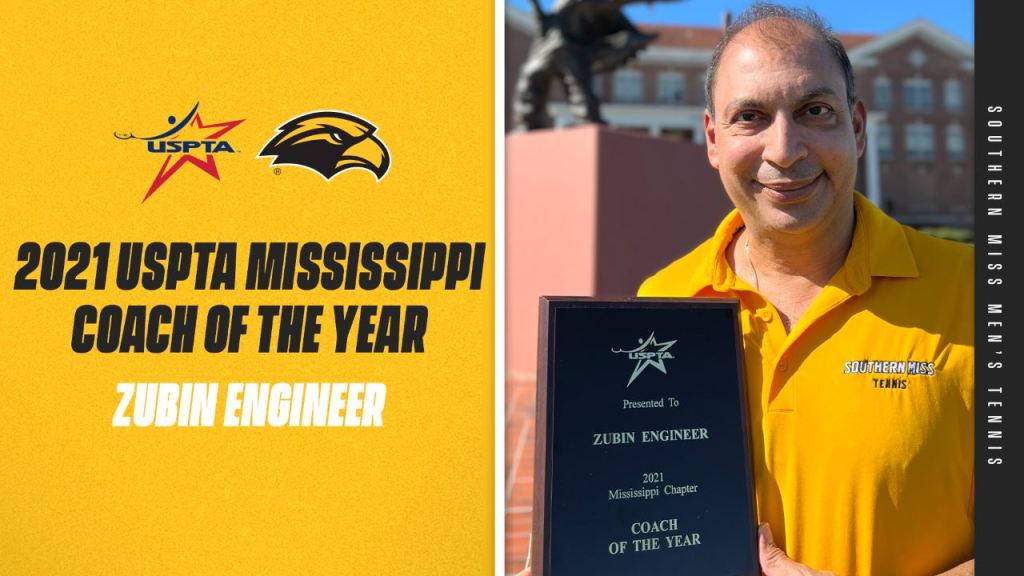 “I am very humbled to receive the 2021 USPTA Mississippi Coach of the Year Award,” Engineer said. “As a coach, impacting student athletes lives in a meaningful and purposeful way is central to their success”.

The award is given annually to a coach that has helped their school succeed on and off the court. Engineer has guided the Golden Eagles to seven winning seasons and a 115-62 record since arriving in Hattiesburg in 2013. Southern Miss vaulted into the top 10 of the ITA Southern Regional Ranking this season. Off the court, his team achieved its highest GPA in program history and had six student-athletes earn ITA Scholar Athlete honors.

Engineer reached new heights in 2018 when he posted a 19-4 mark to help Southern Miss to its best winning percentage in program history. In 2015, Engineer oversaw a tone-setting win against Pac-12 foe Arizona during a road stint in Corpus Christi, Texas. Academically, the men’s tennis team has achieved President’s List, Dean’s List and AD Honor Roll in nine consecutive seasons.

Engineer has been instrumental in bringing tennis back into the Hattiesburg community after starting summer camps for youth players. Recently, he has turned the Hub City into a USTA Collegiate Community Hub. He is also a member of the ITA Southern Regional Coaches Committee while being IOC Coaching certified.

Founded in 1927, the USPTA is the global leader in tennis-teacher certification and professional development. The award for Coach of the Year, recognizes a USPTA Certified Professional who coaches High School or College tennis, for their achievements that include among other things, their coaching impact on student-athletes, community involvement, season records and team and individual player accomplishments.