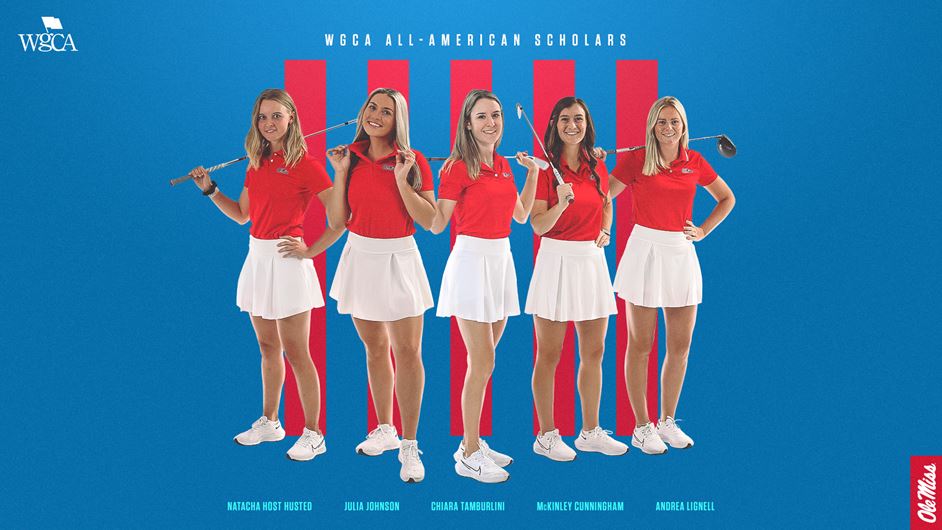 CORAL SPRINGS, Fla. – A total of five Ole Miss women’s golfers received recognition as Women’s Golf Coaches Association All-American Scholars, the WGCA announced on Tuesday.
McKinley Cunningham, Natacha Host Husted, Andrea Lignell, Julia Johnson and Chiara Tamburlini all earned the prestigious academic accolade for the 2021-22 school year.
There have now been 22 Rebels selected to the WGCA All-American Scholar Team with Kory Henkes as the Ole Miss women’s golf head coach. This marks the third consecutive year that Lignell and Tamburlini have earned academic All-America honors.
This also stands as the second time under Henkes that five Rebels received the honor in one season, tying the team’s program-record from 2020 when Lignell, Tamburlini, Pi-Lillebi Hermansson, Ellen Hutchinson-Kay, and Kennedy Swann all earned the title of WGCA All-American Scholar.
The five Rebels stood amongst a total of 1,485 women’s collegiate golfers recognized with the honor on the year across all three NCAA divisions. The criteria for selection to the WGCA All-American Scholar Team are some of the most stringent in all of college athletics, with each recipient needing to meet the minimum cumulative GPA requirement of 3.50 while also competing in 50 percent of the college’s regularly scheduled competitive rounds.
Johnson graduated from Ole Miss having earned her master’s in sports analytics with a 3.50 GPA, with this standing as the first WGCA All-American nod of her career.
Tamburlini, who is coming off of a season in which she earned WGCA First Team All-America and CoSIDA Third Team Academic All-America honors, holds a perfect 4.0 GPA in three years with the Rebels as she pursues a degree in finance.
Also earning WGCA All-American Scholar honors for the third straight year is Lignell, a biomedical engineering major, who holds a cumulative GPA of 3.74.
Rounding out the award winners for the Rebels are a pair of freshmen in Host Husted and Cunningham, who hold GPAs of 4.0 and 3.99, respectively. Host Husted intends to major in psychology while at Ole Miss, while Cunningham is in pursuit of a degree in mechanical engineering.
For all Ole Miss women’s golf latest news and information, follow the Rebels on Twitter at @OleMissWGolf, on Instagram at OleMissWGolf and on Facebook at Ole Miss Women’s Golf. General athletic news can also be found at @OleMissSports on Twitter, Ole Miss Sports on Facebook and OleMissAthletics on Instagram.