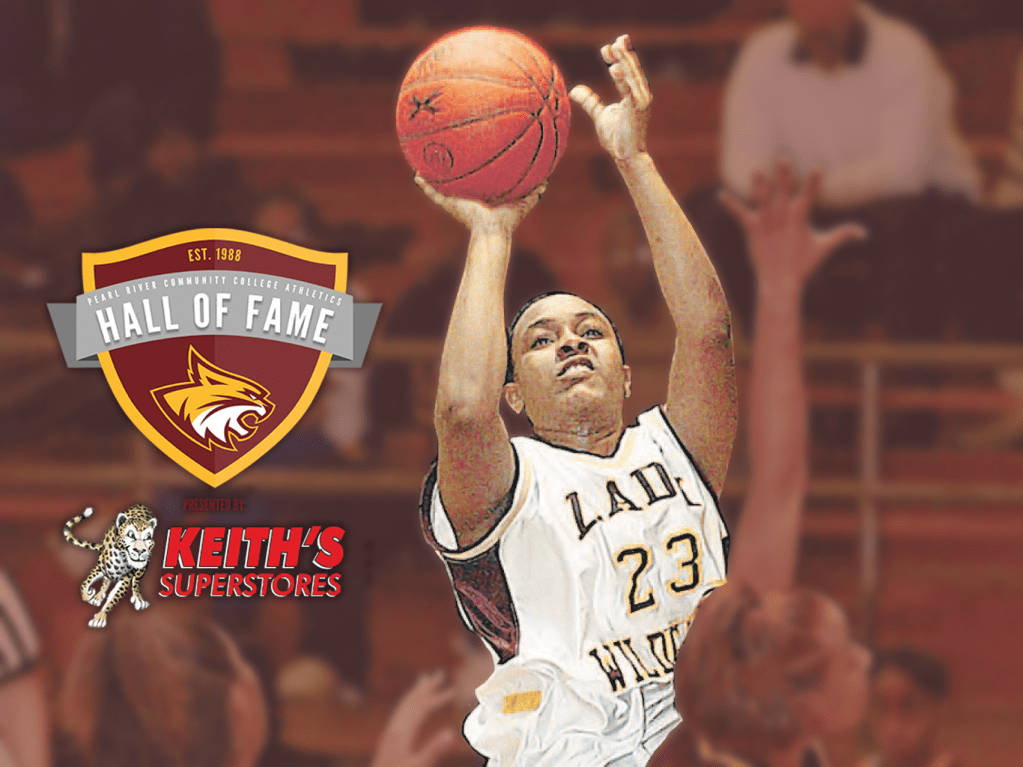 Also included in the 2022 class are baseball’s Eric Adkins, football’s Terry Wayne Adkins and Rickey Cuevas, long-time Sports Information Director Mitch Deaver and softball’s Rachel Hickman Kirkland. PRCC is also presenting Dub Herring with the inaugural Spirit of a Wildcat Award. The River will also recognize its 2002 baseball team during the banquet. Under the guidance of PRCC Hall of Famer Jay Artigues, the ’02 Wildcats were the first PRCC squad to break through to the NJCAA World Series.

Labat talked about what the honor meant to her.

“Honestly, my jaw dropped. I was shocked,” she said. “I know these things take time, but it had been so long that I wasn’t sure if I would get any recognition for the hard work and dedication that I put into playing basketball. I was shocked, overjoyed and almost dropped a tear.

“I want to thank Pearl River Community College for giving me an opportunity to do what I loved doing. I was given all the tools and everything around me to be good at it. I just want to thank anyone who had involvement with me being there.”

Labat said the recognition served as a teaching moment for her children.

“The honor means a lot to me because I have kids and they are also athletes. I’m glad they are able to witness this,” she said. “It is a teaching moment for me with them. Whether you get recognition or not, work hard and do your best. The people who need to see you will see you.”

Labat was born and raised in Bay St. Louis, where she found her love for sports. Labat eventually became a star athlete at Bay High School, not just on the basketball court but also on just about every other field or court. Throughout her high school career, Labat played basketball, volleyball, fastpitch softball and was on the track team.

Despite her involvement in so many other sports, Labat knew from a young age and throughout high school that basketball was the sport she had a future in.

“I knew from a young age back when I was playing city leagues that basketball was the sport that I was going to be pretty good at. I knew that I wanted to be a basketball player even back then.”

Labat’s hunch proved correct as she and her Tigers were dominant during her senior year of high school. Labat led BHS to the 2003 Class 4A State Championship and a No. 1 ranking in the final Associated Press Poll.

For her efforts that season, she was named Sun Herald Player of the Year, All-State and was a McDonald’s All-American nominee.

Labat wasn’t originally supposed to make the trip to Poplarville as she was committed to Southern University in Baton Rouge, Louisiana. Just a few hours before signing her paperwork to become a Jaguar, Labat had a change of heart and decided to attend Pearl River and play for coach Ed Walley.

“It was an interesting situation because I wasn’t supposed to come to Pearl River,” Labat said. “I had already committed to Southern University in Baton Rouge, but the morning I was supposed to sign with them, I called and told them that I wasn’t coming. I spoke with coach Walley soon after and decided to attend PRCC.”

Labat became an instant star as a Wildcat. During her freshman season in 2003-04, Labat averaged a remarkable 17 points and was named to the All-MACJC and All-Region 23 squads for her incredible season.

Labat turned in an arguably better season as a sophomore, picking up an NJCAA All-American Honorable Mention selection.

“I remember getting to Pearl River and getting straight to work,” Labat said. “I really enjoyed my time playing at Pearl River. I met a lot of really good people and we’re still friends to this day. I learned a lot from a lot of different people. Coach Walley was a great coach for me.”

FROM WILDCAT TO LION

After Labat’s PRCC career wrapped up, she signed to continue playing at Southeastern Louisiana where she averaged 3.6 points with 24 rebounds, eight assists and six steals as a senior. She won a conference championship in her time as a Lion, and her .370 3-point percentage still sits in the record books at SLU.

“My time at Southeastern Louisiana began a little less pleasant than things were at PRCC,” Labat said. “At Pearl River, I was a little more popular and was a star in basketball. It wasn’t exactly the same there because I wasn’t a starting player. I was going through some things while I was there, but I ended up winning a conference championship and holding a record. It all worked out in the end.”