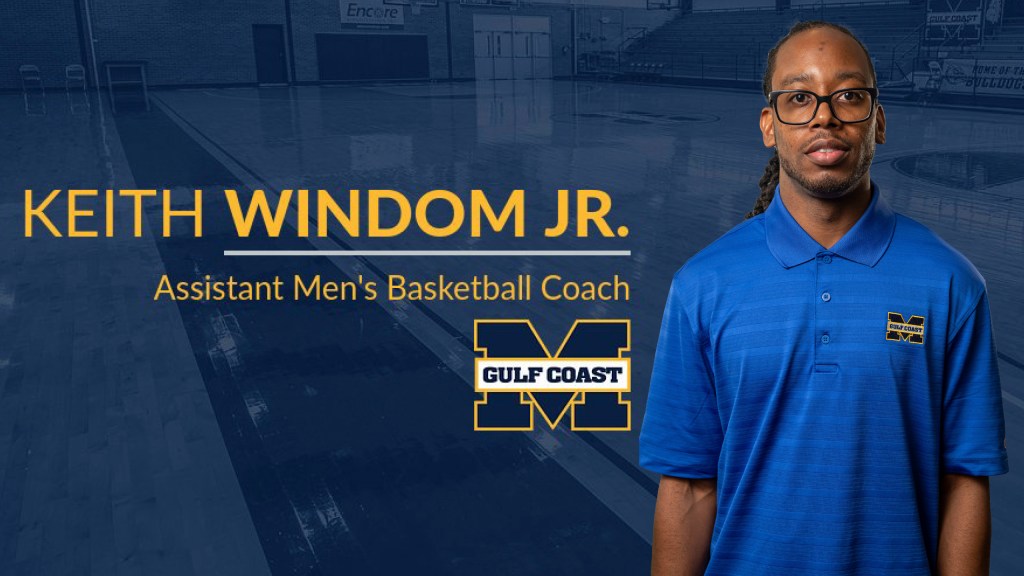 PERKINSTON — Mississippi Gulf Coast men’s basketball head coach Tim Ryan is bringing a new assistant into his program who has a wealth of experience as a junior college player and coach.

Keith Windom Jr. arrives at Perk having spent the last six seasons as an assistant coach at St. Petersburg College in Florida. Windom helped led the Titans to Suncoast Conference and NJCAA Region 8 titles and a berth in the NJCAA Tournament quarterfinals.

His main reason for coming to Gulf Coast?

“It was Coach Ryan,” Windom said. “Knowing his track record, being able to coach under someone who knows the game, who has won a national championship and had the opportunity to be in the game so long, he played a significant part in me wanting to come here.”

In his first two season at St. Petersburg, the Titans ranked in the top 10 in the country in field goal defense by Synergy Sports. He coached 13 members of the All-Conference First Team, 12 on the Second Team, and an FCSAA Player of the Year, two Hal Chasey Academic Players of the Year for the state of Florida and an NJCAA All-American.

“We are excited to welcome Keith to the Bulldog Family,” Ryan said. “We look forward to the wealth of experience he will add to our program. We anticipate the success Keith had as a coach and player and at the junior college level will continue here at Gulf Coast.”

Windom coached two years at the OnPoint Hoops Academy in El Reno, Oklahoma, and previously was an assistant at his alma mater, South High School in his hometown of Wichita, Kansas.

He had been a four-year letterman there and was a McDonald’s All-American nominee. He was twice named All-City by the Wichita Eagle newspaper and earned Class 6A All-State honors as a senior. Windom averaged 21 points his final two seasons in high school

Windom went on to play at Hutchinson Community College, where the team was in the top 10 in the country as a freshman. He started every game as a sophomore and was All-Kansas Jayhawk Community College Conference. He went on to play at Pittsburg State, where he started all 28 games as a senior and led the team in assists and steals. He was named All-Conference Honorable Mention in the Mid-American Intercollegiate Athletics Association. He led the team in 3-point field goals and steals as a junior, starting 11 of 31 games.

He has taken what he learned playing and built on it as a coach the last six seasons.

“I’m still a young coach, so just being able to connect with the kids,” Windom said. “That and skill development are my biggest strengths.”

Windom has a bachelor’s in general studies from Pittsburg State and a master’s in coaching and athletics administration from Concordia University Irvine. He is engaged to Torrey Thille.

“I want to thank (Athletic Director) Steven Campbell and Tim for giving me the opportunity,” Windom said. “I’m very excited to be in a small-town college atmosphere. I don’t think there’s anything like being in a small town where everybody likes athletics.”