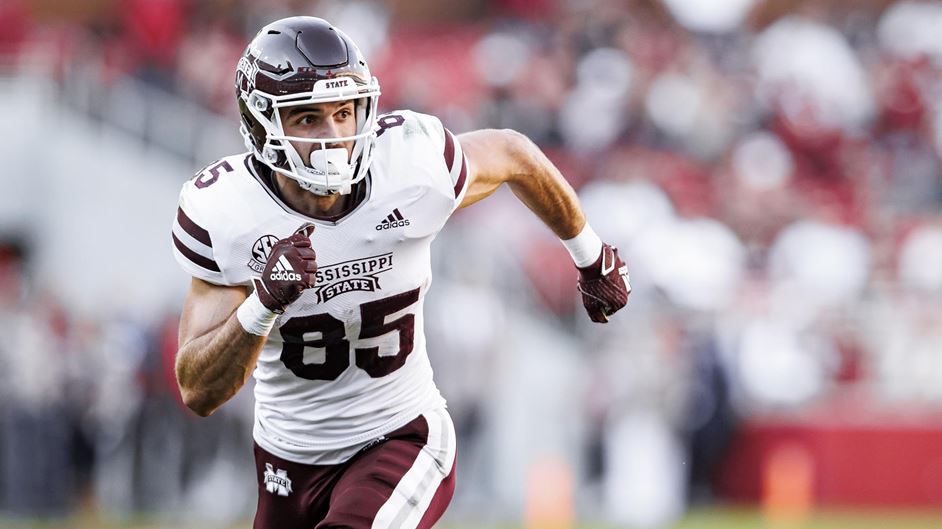 STARKVILLE – Mississippi State redshirt senior receiver Austin Williams has been named to the watch list for The Wuerffel Trophy, College Football’s Premier Award for Community Service, it was announced by the organization on Thursday (July 28).
Williams, who was a semifinalist for the Wuerffel Trophy in 2021, is one of 115 players named to the preseason watch list for the award. Named after Danny Wuerffel, the 1996 Heisman Trophy-winning quarterback from the University of Florida, the Wuerffel Trophy is presented each February in Fort Walton Beach, Florida. The trophy honors college football players who serve others, celebrate their positive impact on society and inspire greater service in the world.
Williams has excelled both academically and athletically throughout his time at Mississippi State.
He holds an undergraduate degree in business administration/finance, as well as a master’s in business administration. Currently, Williams is working toward his third academic degree. He has maintained a perfect 4.0 GPA throughout his time in Starkville. Additionally, Williams is a five-time member of the SEC Academic Honor Roll and a five-time selection to the MSU’s President’s List and Bulldog Honor Roll.
The receiver is a two-time CoSIDA First Team Academic All-American.
On the field, Williams is gearing up for his final season of eligibility in 2022 and looking to cap off what has been a decorated Bulldog career in which he has played in 50 games, totaling 116 receptions for 1,245 yards and 12 touchdown catches. Since 2019, Williams owns the lowest drop rate of any SEC wide receiver at just 0.9 percent. Williams enters his final campaign following a career season in 2021 that saw him set new personal season highs with 52 catches for 617 yards and four touchdowns.
In May, Williams was honored with the McWhorter Scholar-Athlete of the Year Award, which is considered the highest academic honor for a student-athlete in the SEC. The league’s male and female winners are each presented with a $20,000 postgraduate scholarship.
Semifinalists for the award will be announced on November 1, and finalists will be announced on November 22. The formal announcement of the 2022 recipient is scheduled to be made on December 8, and the presentation of the 2022 Wuerffel Trophy will occur on February 24, 2023.
Mississippi State is set to begin the 2022 campaign on Saturday, Sept. 3, when the Bulldogs host the Memphis Tigers in a 6:30 p.m. game at Davis Wade Stadium. Season tickets are on sale now at HailState.com/tickets, by calling 1-888-GO-DAWGS or in person at the MSU Athletic Ticket Office on the first floor of the Bryan Athletic Administration Building (288 Lakeview Drive).
For more information on the Bulldog football program, visit HailState.com, or search for “HailStateFB” on Twitter, Instagram and Facebook.