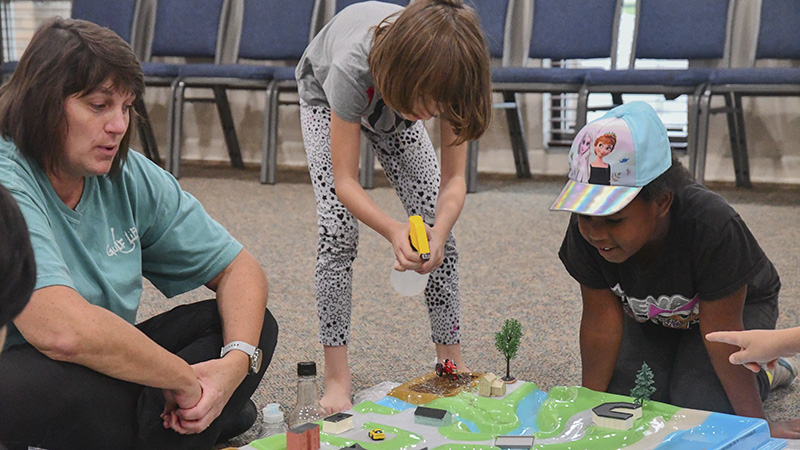 Jeanne Allen from the Environmental Protection Agency explains to children in the Summer Reading Program at the library in Picayune how a run off works using a watershed model. Photo by David Thornton Jr.

During this week’s Ocean of Possibility Summer Reading Program, children learned about the Pearl River watershed.

Tuesday afternoon several children got to experience, explore and learn about the Pearl River watershed from Jeanne Allen from the Environmental Protection Agency during the Summer Reading Program event held at the Margaret Reed Memorial Library.

Allen taught the children about what impacts water systems and how they can keep them clean.

The Pearl River watershed is the biggest watershed in the United States, draining more than three million square kilometers of land. Allen taught the children that the EPA’s main concerns are with the air and water, two of the most important things in the environment. Even though the EPA is commonly known for regulating those aspects of the environment, Allen’s department is different because she helps improve water quality across Mississippi.

Allen brought a model watershed for the children to see exactly how they work.

With the model in place, the children simulated a garden or farm by adding soil and fertilizer which was represented it the simulation by sugar. Allen then showed the children what happens if they add to much fertilizer to a garden, demonstrating how it would run off during rain events and end up the rivers. Allen allowed a child to simulate rain over the farm by using a spray bottle. As the children sprayed water on the model, they saw the soil be affected by rain run off.

Allen then showed them what a wetland is.

“It’s a low area that will capture run off from another area,” said Allen.

In the model the children saw the run off water travel down stream. The purpose of a wetland is to filter the water and help absorb into the soil, along with fertilizers. The filtration process cleans the water, making water a recyclable resource.

In the model, the children saw the stream reach the wetland and separate the soil and fertilizer from the water.

“Wetlands are very important to our river system, and our creeks. That’s why the wetlands play an important role,” said Allen.

Wetlands also keep harmful things from local wildlife so they don’t inhale or drink toxic water. Because of that process there is a time during the year when people can’t eat oysters. After heavy rains, oyster harvesting is shut down because of the bacteria picked up by the oysters makes them toxic and sickens those who consume them.  Allen said after taking samples of the water and a two week waiting period, oysters are then cleared for harvest if they pass the test.

Allen also showed the children what happens to oil at gas stations. In the watershed model Allen used soy sauce to represent oil left on the ground at a gas station by a vehicle. The children learned that oil in small dosages won’t hurt anyone but large amounts are dangerous. During the demonstration, the children saw the oil scatter and seep into the ground. Allen taught the children that the process affects residents with private wells.

The children also learned about the hypoxic zone in the Gulf of Mexico. This occurs during the summer and is an area of low oxygen that can kill fish and marine life near the bottom of the sea.

Allen said the difference between the ocean water and the hypoxic zone can be seen from a boat. The hypoxic zone is created by heavy rains and melting snows washing massive amounts of nutrients (particularly nitrogen and phosphorus) from lawns, sewage treatment plants, farm land and other sources.

Allen closed the lesson by challenging the children to pick up trash whenever they see it. Picking up trash will prevent it from flowing down stream and keeps harmful bacteria from reaching the Gulf.