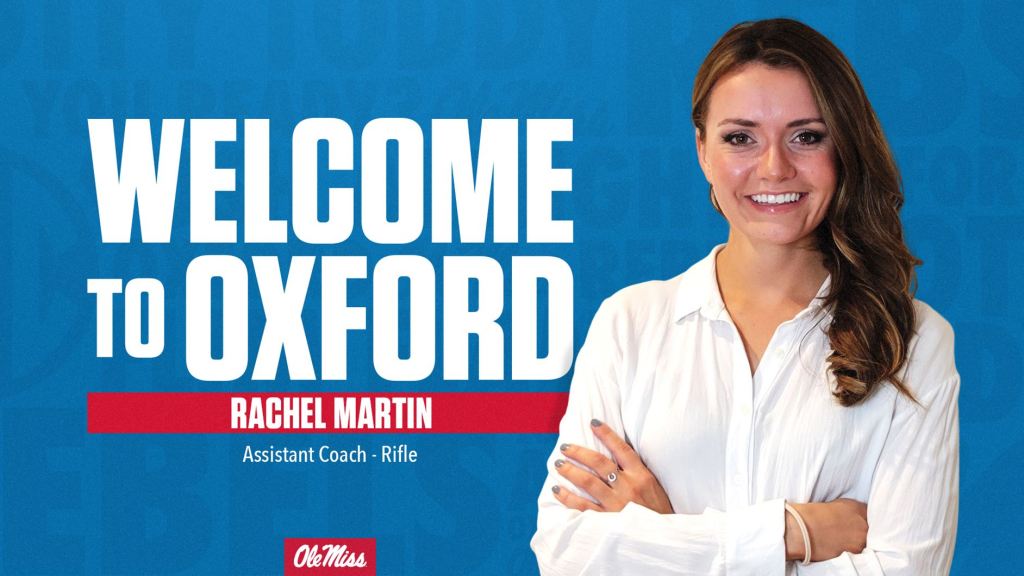 OXFORD, Miss. – Ole Miss rifle head coach Marsha Beasley announced NCAA National Champion and seven-time All-American Rachel Martin as the newest assistant coach as the Rebels prepare for the upcoming 2022-23 season.
“I’m very excited that Rachel will be part of the Ole Miss Rifle Program,” said Beasley. “The experience she brings, as an athlete and as a college coach, will be so helpful to our team. I feel so fortunate she has accepted this position, and I look forward to working with her, learning from her and seeing how the Ole Miss Rifle Program continues to grow and improve.”
Martin joins the Rebels with two years of head coaching experience at Nebraska, where she guided the Huskers to NCAA Championship appearances in both years. In her first season with the program, she guided her squad to a No. 4 ranking in the CRCA Poll, fired a program record 4707 in the NCAA Qualifier match and produced three All-Americans. Martin followed up a stellar first season with a sixth-place finish at the 2021 NCAA Championship, the school’s best performance since 2017.
Prior to arriving in Lincoln, Martin spent the 2018-19 season as an assistant coach at Army. In her lone season, she helped the Black Knights qualify for the NCAA Championship and take home a sixth-place finish at the event. Over the course of her coaching career, Martin has guided five student-athletes to nine combined All-American honors.
A former competitive shooter herself, Martin rewrote the record books at Nebraska from 2014-17, claiming an individual NCAA Championship in smallbore in 2015 and earning seven All-American honors over the course of her career. Her individual success helped Nebraska to four consecutive top-eight team finishes at the championship meet, including a pair of top-five finishes.
After graduating from Nebraska in 2017, Martin moved to Colorado Springs to train at the United States Olympic Training Center. She has been a member of the USA Shooting World Cup team since 2013, representing Team USA in seven World Cups, and is a seven-time national champion. Martin also served as an alternate for Team USA at the 2021 Tokyo Olympics.
“I’m so thankful for the opportunity to work with Coach Beasley and join a team with such a stellar reputation and work ethic,” said Martin. “I am looking forward to this coming season and seeing all that these athletes can accomplish.”
In addition to coaching the Rebels, Martin was accepted into the university’s doctoral program for Defense and Strategic Studies, where she will be focusing on ethical warfare.
For more information on Ole Miss rifle, follow the Rebels on Facebook (OleMissRifle), Twitter (@OleMissRifle), Instagram (@OleMissRifle) and at OleMissSports.com.