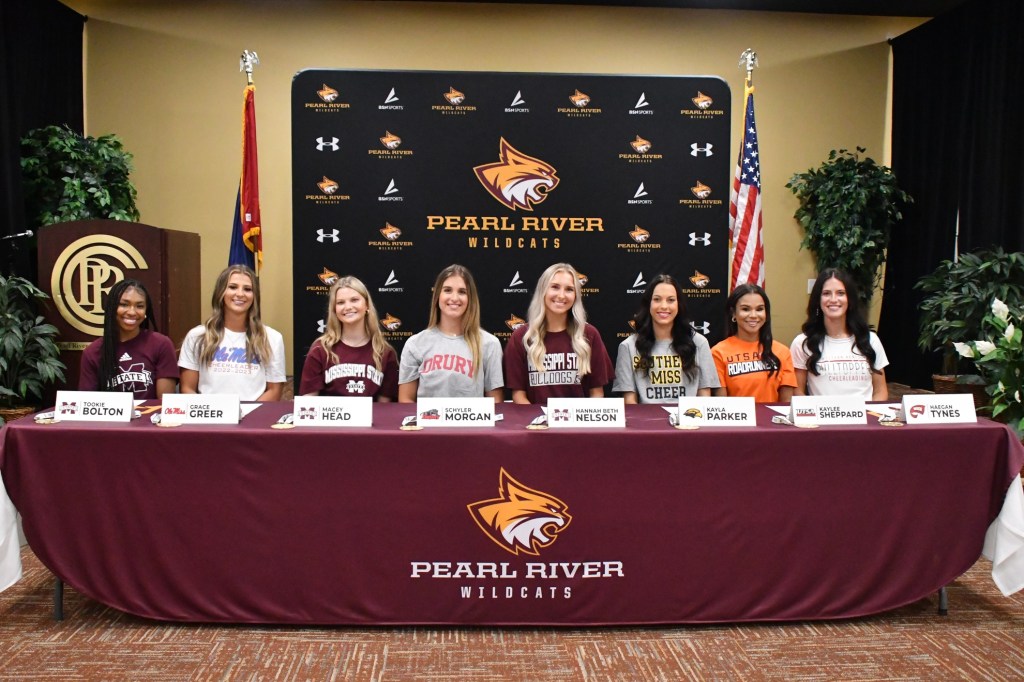 POPLARVILLE, Miss. — A few months removed from claiming its first UCA National Championship, the Pearl River cheer squad is sending eight standouts to cheer at the next level.
This year’s group of next-level signees includes Texas San Antonio signee Kaylee Sheppard (Crestview, Fla.), Drury signee Schyler Morgan (Vicksburg; Warren Central), Ole Miss signee Grace Greer (St. Martin), Western Kentucky signee Haegan Tynes (Purvis), Southern Miss signee Kayla Parker (Hattiesburg; Oak Grove) and Mississippi State signees Tookie Bolton (Poplarville), Macey Head (Poplarville) and Hannah Beth Nelson (­Purvis)
“I’m thrilled to see eight cheerleaders from Pearl River earn their chance to cheer at the next level,” Pearl River coach Sarah Smith said. “They are elite athletes and amazing teammates, and I know they will represent Pearl River well as they move on.
I’m so proud of their accomplishments and forever grateful to them for giving Pearl River cheerleading their all.”
KAYLEE SHEPPARD
“Kaylee is a little firecracker,” Smith said. “I’ve had the privilege of watching her really grow as an athlete and teammate this year. While being fully committed to her team at Pearl River, she’s also been focused on cheering at a university, and she’s ready for it. UTSA is lucky to be getting her and all of her energy talent.”
SCHYLER MORGAN
“Schyler is an all-around athlete,” Smith said. “She holds herself to a really high standard; if there was a moment of downtime at practice she’d take herself to the corner of the mat and throw standing tucks on repeat. It’s been awesome to watch her work and accomplish whatever she sets her mind to.”
GRACE GREER
“I’m so excited for Grace to be joining another National Championship program at Ole Miss,” Smith said. “Grace is a very strong and composed athlete. She challenges herself, and I know she will continue to accomplish great things. Pearl River was lucky to have her for a season, but we can’t wait to see her representing the Rebels.”
HAEGAN TYNES
“Haegan earned a spot on one of the most talented Division I cheer programs in the nation, which is fitting because she’s one of the most talented cheerleaders to come through Pearl River,” Smith said. “Haegan could stunt in all four positions, mid-layer our pyramids like a pro and she was an absolute joy to coach. She has the sweetest, most encouraging spirit. WKU is lucky to have her.”
KAYLA PARKER
“Kayla came to us at The River after taking a break from cheerleading, and I am so glad she chose to return to cheer because her talent really strengthened our team this year. She was a base for us, but there were a couple of times she showed us she’s a pretty good flyer too! Kayla is one of the smartest cheerleaders that I’ve coached. She understands what a stunt needs, and I could count on her to make it hit.”
TOOKIE BOLTON, MACEY HEAD & HANNAH BETH NELSON
“These girls are three of the team’s heartbeats,” Smith said. “Their work ethic is incredibly impressive. This trio (along with Haegan) undoubtedly repped out well over 1,000 stunts in their two years at PRCC. Macey is one of the best top girls around. I can’t wait to see her flying through the air in maroon and white.
Hannah is a visionary. She is an amazing cheerleader, and I can see her leading her own team to a National Championship one day. Tookie is fun and calm and collected all at the same time.
Right before walking into the final performance at Nations, she said, “We got you, coach.” I’ll never forget that. From Cats to Dogs, they were born to do great things.”
For the latest on Pearl River Community College athletics, follow us on Twitter (@PRCCAthletics).
and Facebook (PRCCAthletics).