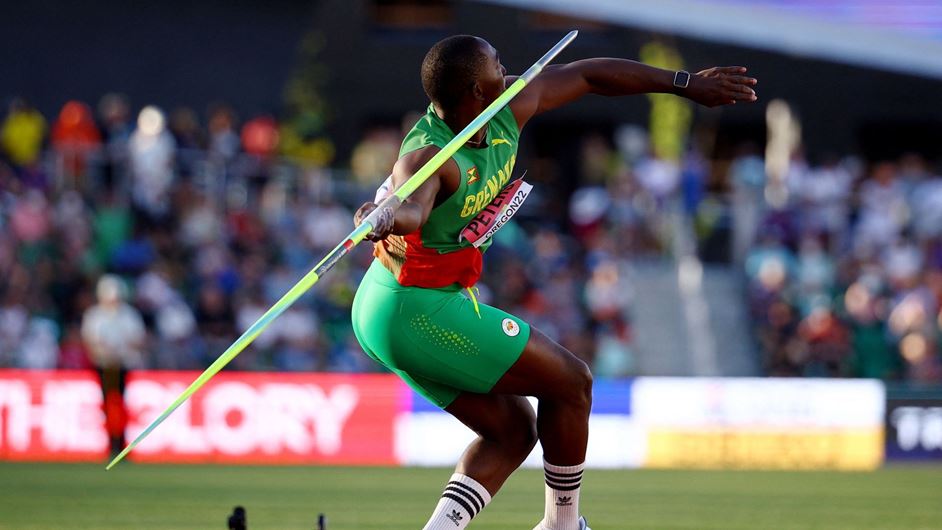 The St. Andrews, Grenada, native accomplished something no man had done in his lifetime. World record holder Jan Zelezny (CZE) won back-to-back world titles in 1993 and 1995. With his gold medal on Saturday, Peters, who was born in 1997, became the second man in World Athletics Championship history to defend his javelin title.

In 2019, Peters won Grenada’s second world title in any event and became just the third medalist in Grenada’s history. He was the first athlete from the Americas to win the world championship in the javelin that year.

Peters led from his first throw, tossing facility records on each of his first two attempts. He launched the implement 90.21m (295-11) then improved to 90.46m (296-9). His third throw was shorter as he fell to the ground and narrowly kept his chin from touching the foul line the foul line, but Peters smiled and laughed off an 87.21m (286-1) mark.

American Curtis Thompson opened with a 78.39m (257-2) effort before fouling his second attempt. He sat in seventh place through two rounds, which would have earned him an additional three throws as one of the top eight athletes.

The third round, however, saw marked improvements from the field. Thompson, throwing 11th out of 12 athletes, sunk down to 11th place before he took up the javelin for his third attempt. His final attempt sailed outside the right edge of the sector for a foul.

Peters’ fourth throw was also short of the 90m mark, but he paused to tell the camera two words as he awaited his fifth attempt.

On his final attempt, with a gold medal already secured, he broke the Hayward Field facility record for the third time on the night, sending the javelin out to 90.54m (297-0).

American Tiffany Flynn will be the final Bulldog in competition on Sunday night in the women’s long jump final at 7:50 p.m. CT. She is looking to be State’s third world medalist this year, joining Peters and 800m bronze medalist Marco Arop of Canada.

“First I want to wish Tiffany good luck as she prepares for tomorrow’s final,” MSU head coach Chris Woods said. “Tonight was a great night for Mississippi State University and our track and field program. Marco and Anderson along with all the other current and former student-athletes take much pride in representing their countries as well as our Bulldog family. What people are witnessing on the television is the absolute highest level of track and field and to have all of our Bulldogs representing Mississippi State University on such a large platform means the world not only to the athletes, but it means the world to everybody that has helped them along their journey.”