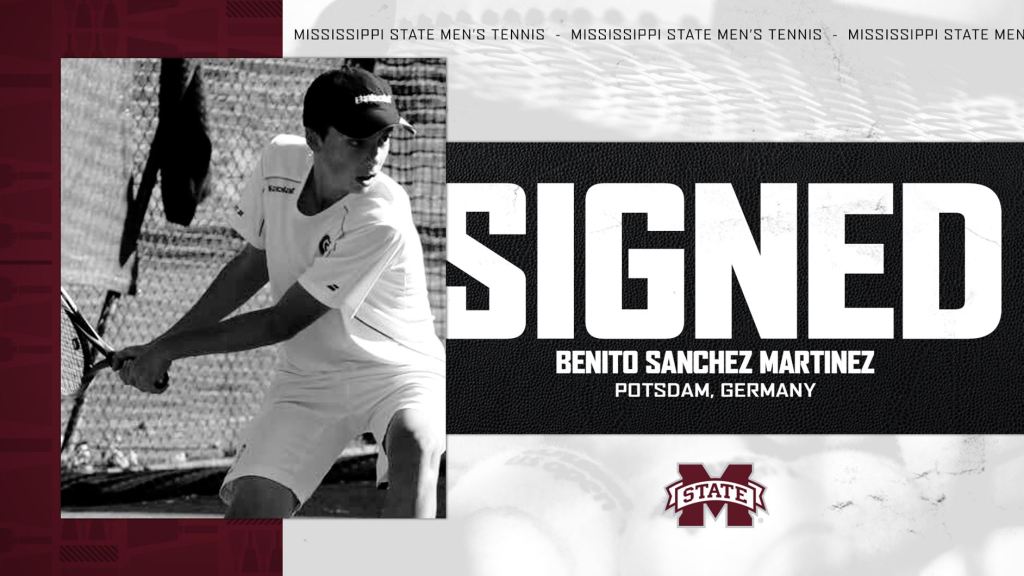 “Looking back over a decade, Mississippi State tennis has been lucky to sign many great German tennis players and with the addition of Benito, we can continue this special tradition,” Roberts said. “We have no doubt that he will have a special impact on our program and tennis community.

“We are very excited to have Benito join our program. He is an exceptional young man in all areas that will have an immediate impact on our program’s culture and competitive environment. His background and experience proves he is ready to compete at the highest level of college tennis and we are very excited to assist in the next phases of his development on and off the court.”

Martinez will enroll in August and begin playing with the Bulldogs in the fall. The Potsdam native posted a career-high ITF Junior ranking of 80 and an ATP singles ranking of 1612 and doubles ranking of 966. His personal-best UTR rating is 13.51.

“Coming in August is great for our team and for Benito to start flowing with our daily routines and becoming brothers with the guys here for these 4-5 months before the spring,” Jacoby said. “It is definitely advantageous for development on the hard courts and relationship development off the courts.

“Benito has been a stand-up guy throughout the recruiting process and is a very clear and motivated young man for what he wants in his life and his tennis. He goes above and beyond with how he approaches his goals and will be a great influence for the Bulldogs right away.”

Martinez, a 20-year old southpaw, has already competed in the juniors main draw at the Australian Open in 2020 and reached the finals of the ITF 15K in Allershausen, Germany in 2021 and the ITF 25K doubles semifinal in Hamburg the year prior.

Martinez also owns a victory over current ATP No. 143 Pavel Kotov during the qualifying draw of the 2020 Eckental 100K Challenge.

“Those experiences will for sure aid his learning curve timeline greatly,” Jacoby said. “He has played in high pressure situations for many years, and his calm yet intense demeanor on court during practices and matches alike will transfer over to having success here.”