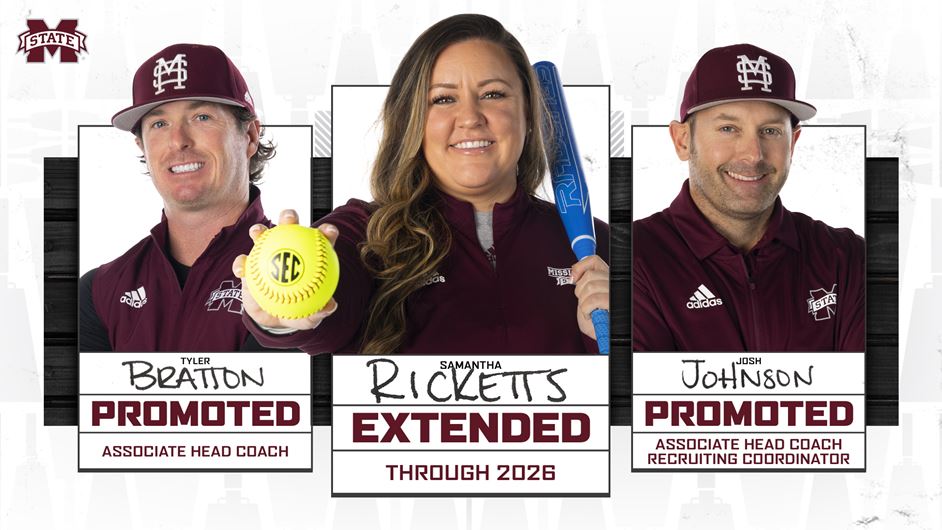 STARKVILLE – Mississippi State’s softball staff is here to stay. Director of Athletics John Cohen inked head coach Samantha Rickettsto a four-year extension that will keep her in Maroon and White through 2026.

In turn, Ricketts has secured her coaching staff as well. Assistant coach Tyler Bratton and Josh Johnson have both been elevated to associate head coach. Additionally, Johnson will serve as recruiting coordinator.

“Coach Ricketts has improved our program during the past three seasons as our head coach,” Cohen said. “It is evident that Coach Ricketts and her staff have worked tirelessly to elevate Mississippi State softball to the Super Regional level. We are very excited about the future and look forward to reaching new heights under Samantha’s leadership.”

Under Ricketts, Mississippi State softball has witnessed historic improvements on the diamond. The 2022 campaign saw the Bulldogs advance to their first Super Regional and earn the right to host a postseason game for the first time. Ricketts has improved MSU’s win total in each of her seasons at the helm. In her first campaign, State’s 25 victories in the shortened 2020 season were tied for the most in the nation. She then posted a 35-win and 37-win season in Starkville.

Following the 2022 season, both Annie Willis and Mia Davidson were drafted to play professionally, making State one of four teams nationally with multiple draft picks. State has now seen 13 players drafted in its history, and Ricketts has guided seven of them in her tenure as the head coach or an assistant. Fa Leilua also signed a professional free agent contract, bringing the total of professional Bulldogs to 22. Of those, Ricketts has coached 10.

“I am thankful that John Cohen believes in our staff and the future of our program,” Ricketts said. “Coach Johnson and Coach Bratton are an integral part of what we are building and have been hitting the recruiting trail, looking to continue building on the foundation of what last year’s team built. These titles are recognition of their dedication to and hard work for this program as they continue to push us forward to make more history for Mississippi State softball.”

Bratton, who will enter his 10th season with the softball program in 2023, has been a key part of the Bulldog offense from the third-base coaching box. In his seven seasons giving the signs, Bulldog baserunners have been successful on 84.4 percent of their stolen base attempts. He also takes responsibility for State’s outfielders, who in 2021 led the SEC with 15 outfield assists.

In his three seasons at MSU, Johnson has transformed the Bulldog pitching staff. From 2017-19, MSU struck out 6.19 batters per seven innings and walked 3.47. Since Johnson arrived in 2020, the Bulldogs have averaged 7.54 strikeouts and just 2.90 walks. MSU has also been among the top five SEC teams in strikeouts in all three years. Most recently, the 2022 team was fourth in the conference in strikeouts and second in batters struck out looking.

Entering 2023, MSU will be coming off its highest final ranking ever in both the NFCA (No. 19) and USA Softball (No. 20) polls. D1Softball.com ranked State at No. 17, and Softball America labeled MSU the No. 15 team in the nation in their final rankings.