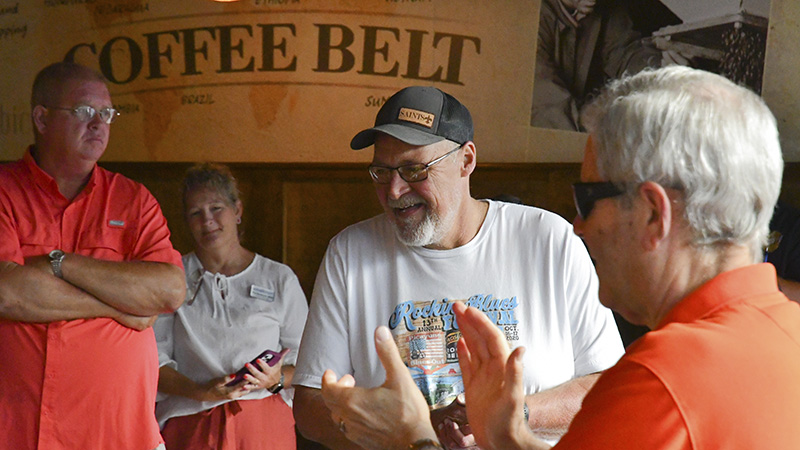 After 28 years of working as a police officer in the Picayune Police Department and as the city’s Code Enforcement Officer, Tom Milar has decided to step down and retire.

Milar’s years of service were recognized by friends and family Friday morning at PJ’s Coffee.

In a speech to the crowd of attendees Milar said, “It has been a fantastic ride, and I love this city.”

He mentioned Police Chief Joe Quave in his speech, expressing how much of a great job he’s doing and the bond they built over the years. He also thanked two City Council members Anna Turnage and Frank Ford for their ongoing support.

“The community support and the community love has been outrageous, I’m more proud now than I’ve ever been because you don’t know how many lives you actually touch by just doing your job and just trying to be helpful,” said Milar.

Milar concluded his speech by saying he’ll still be part of the community, Kiwanis Club and in everything Picayune does.

“Guys you just don’t know how much love and how supportive this is, and I appreciate and love all of you for coming out. I appreciate every single one of you for your support you’ve given me throughout the years,” said Milar.

When asked why he chose to retire at this time, Milar said “Because I was forced out.”

In his absence, Milar said he will miss working with the public, the people and employees who he describes as being like a big family.

“This is my home it’s been an absolute joy 100 percent and I absolutely loved my job. I did everything to the best of my ability and like I said earlier you don’t know how many lives you’ve touched just by doing your job and doing it the right way,” he said.

Even though he’s leaving employment with the city after nearly 30 years, Milar says he plans to find employment in another field at some point. He has several employment opportunities lined up but for now Milar plans to just enjoy retirement for a few weeks by relaxing and getting his mind back in order. He said he will venture forward after that.