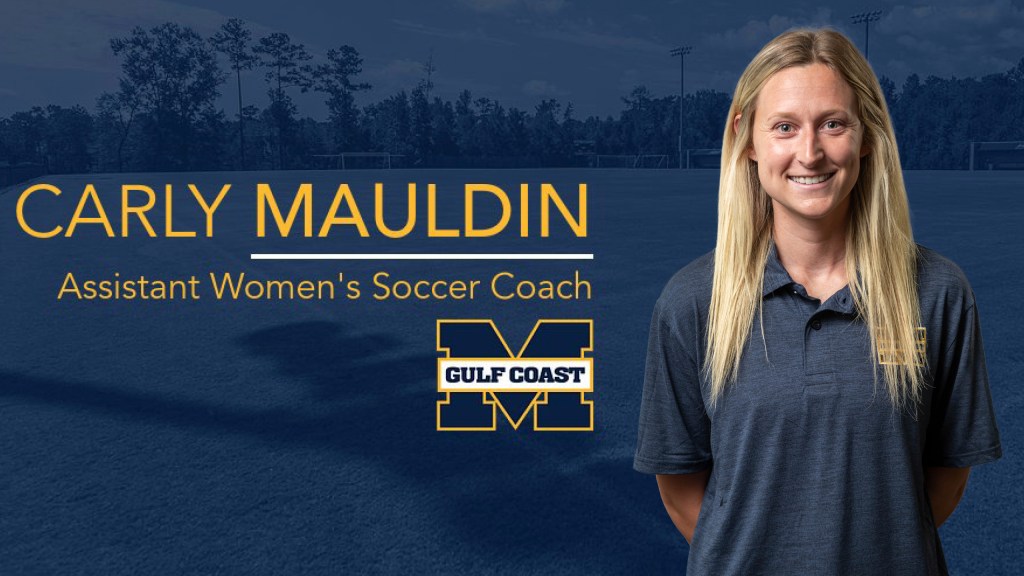 PERKINSTON — New Mississippi Gulf Coast women’s soccer coach Aaron Avila reached out to a former player when he was hiring his first assistant coach, and Carly Mauldin was eager to join him.

Mauldin joins Gulf Coast for the 2022 season with an NCAA Division I coaching background and dazzling playing performances at the high school, college and professional levels. She and Avila already have top-flight chemistry, having combined for an appearance in that state championship game in high school.

“Aaron trained me when I was younger, and his coaching philosophy and how he runs a program is really what I wanted to be a part of,” Mauldin said. “The facilities here at Gulf Coast set these players up for success, and I’m excited to be part of it.”

She spent the last two years as an assistant coach at the University of Southern Mississippi, where she helped lead the Golden Eagles to their first division championship and second appearance in the conference title game.

USM won its first Conference USA West Division championship in fall 2021. The Golden Eagles advanced to the C-USA championship game, finishing 10-4-3 overall and 4-1-3 in the division. The season scheduled for fall 2020 was played in spring 2021, and USM went 7-3-1 overall and 4-2 in division competition. They played in the C-USA semifinal, losing in penalties after a scoreless draw to eventual champion Rice.

“I’ve known Carly for a long time, and I’ve coached her,” Avila said. “I know she’s a very good player and she’s a very good coach. It was a no-brainer to bring her in and help us build the program. I think she’s gonna do great.”

Mauldin, who is originally from Laurel, played a year of high school soccer for Avila at West Jones. They took the Mustangs to the state championship game that year, then Mauldin went on to lead the school to three Class 5A state championships. She was named All-District six times.

She played collegiately at Mississippi State, where she was a star midfielder from 2015-18. She started all 72 games, which ranks seventh in school history, and her 6,545 minutes are the fifth-most. She was named to Mississippi State’s All-Time Team selected in 2019. Mauldin earned All-SEC Second Team and NCSAA All-Region Third Team honors in 2018. That year she was the Bulldogs’ captain and led MSU to its first NCAA Tournament appearance.

Mauldin moved to Finland to play professionally. Playing for Nurmijärven Jalkapalloseura, she won Female Player of the Year of the Kakkonen League in 2019.

“She’s one of the hardest-working players I’ve ever coached, and she carries that mentality into coaching,” Avila said. “She’s very eager to learn and very disciplined in what she does. That will be a great influence for the players in our program.”

She started coaching in 2017 as a youth coach for Next Level Training in Detroit, Mich., and did that for two summers.

Mauldin is engaged to Todd Makovicka, a strength and conditioning coach at USM.

“I’m just thankful for this opportunity to work under Aaron and be a part of the future of Mississippi Gulf Coast and the success the college wants for our program,” she said.