Lady Hornets are locked in for volleyball’s upcoming season 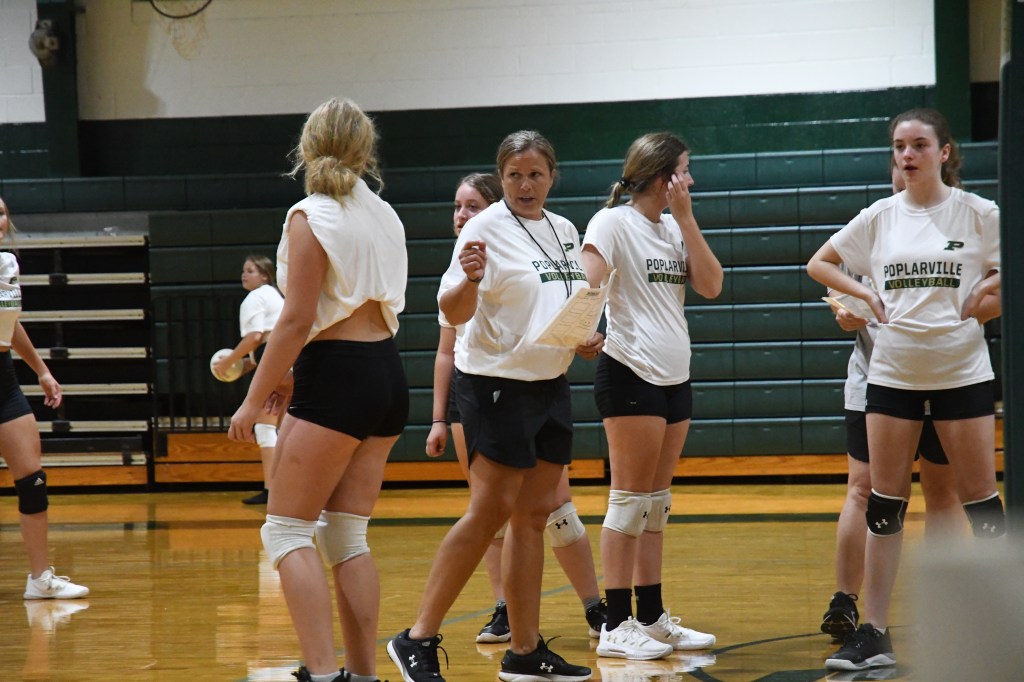 The Poplarville Lady Hornets are hungry for the upcoming volleyball season with one goal in mind, winning a state championship.
“Our goal this year is state and nothing less,” said senior Rayelin Davis.
This year’s team will have a lot of returning players from the 2021 season led by first year Head Coach Amanda Lander. She plans to bring lot of discipline, player commitment, hard work and a strong team-based atmosphere to the program.
“I want us to win district, that’s the main goal. The second goal will be to get into the playoffs. We’re really pushing hard to get them into the playoffs and let them experience that,” said Ladner.
“We have a lot of young kids that are really invested into this sport already, that’s really promising looking into the future,” said Davis.
Bolin said the incoming seniors were passionate players as freshmen, and in their last year on the team they feel determined to go far this season.
Before any team can achieve a championship, they must understand their strengths and weakness, along with learning how to maximize their strengths and limit their weaknesses.
“Our strengths definitely lie in our athletic ability, we have so many athletes, all six of us especially starters, we give everything we got, we give 100 percent. The athleticism and the want to play and the energy and effort is all there,” said Davis
“Our weaknesses are definitely if we don’t come out with energy and if we don’t come out hard, we can get down really deeply and then it’s hard to pick ourselves up,” said Bolin.
Ladner, after Friday’s practice, asked her players what improvements they think the team needs. Some said communication, others said being in the right spots. Ladner said she challenges her players this way frequently.
“It helps them self evaluate. I can tell you something all day long but if you don’t see it yourself you’re not going to be able to change it,” said Ladner.
The main things the Lady Hornets have been improving upon include getting in harder hits and becoming better at serving. Ladner has seen a lot of growth in those aspects in the summer workouts.
“I’ve seen their hits get harder, and I seen our passes get a lot better, said Ladner.
Pass Christian High School and Stone High School are the two strongest returning teams in Ladner’s book. She has those matches circled on her calendar as a test for where the team will stand in district.
“That’s the bar, that’s where we want to be, being able to compete with them,” said Ladner.
Bolin and Davis are looking forward to playing Pass Christian since the team bested the Lady Hornets last season, winning two of the three matches.
“Our goal is definitely to sweep Pass Christian,” said Davis.
As the season approaches, the Lady Hornets have put a lot of expectations on themselves to perform well in front of the fans. Ladner hopes to see big turn outs from the community and a well stocked student section at every home game.
“We have tons of fans that come out and support us, we just want to put on a show for them,” said Davis
“They can expect us to come out on this court with a bunch of energy and we aren’t backing down,” said Bolin.
Since this is Davis and Bolin’s last year at Poplarville, Davis wants to be recognized as a great teammate even through her ups and downs. She also wants to instill a leadersship mindset in her team.
“I want to leave the mental game in their head, I want them to think about me when they think about who they want to play like,” she said.
Bolin wants the younger players to follow in the senior players’ footsteps.
“I want the younger girls to see our passion for the sport and I hope they grasp onto our passion and follow us,” she said.
The Lady Hornets will serve up the start of the season with a jamboree on July 30 at Picayune Memorial High School.
Then, they will host the Lady Maroon Tide on Monday, Aug. 8.