Lady Blue Devils’ volleyball one week away from season opener 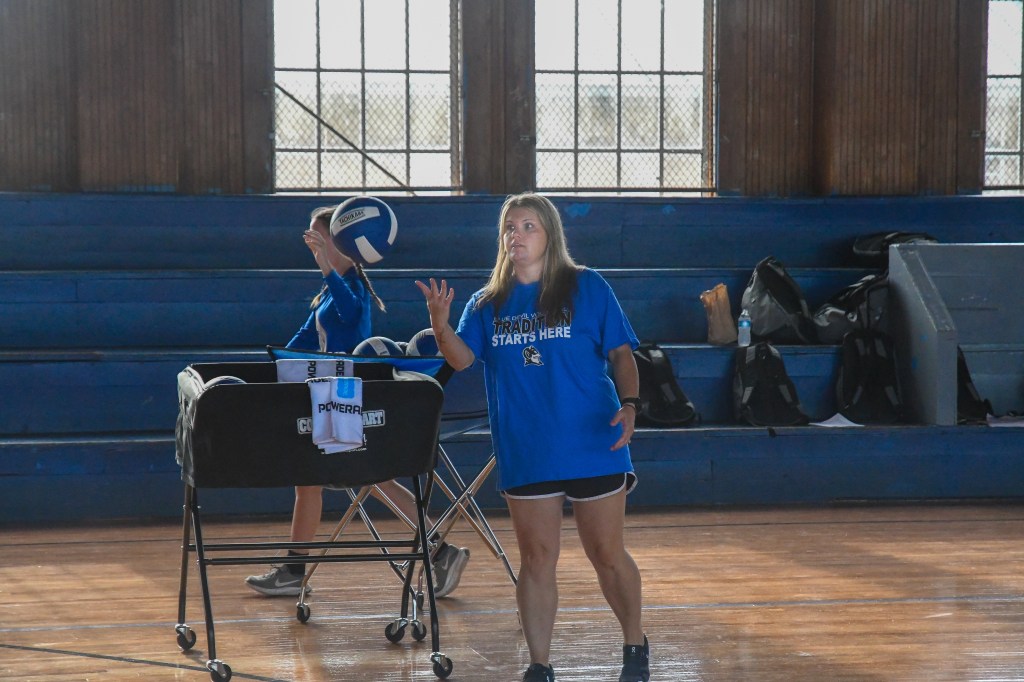 Pearl River Central volleyball is preparing to rally a young programs to move into the varsity team.

For first year Head Coach Nicole Brown, her goal this season is to develop her ninth grade team to be prepared to join the varsity team. Her plan is to build a team capable of competing in district in the near future.

“We established a varsity, JV, and ninth grade team so that we could keep a lot of our younger girls, and build our program, said Brown. “That’s our varsity team’s biggest goal. A lot of our girls are older and they realize this year probably won’t be the best as far as wins and losses but they understand our ninth grade and 10th grade is really where the program sits.”

Brown wants the entire program to keep a positive attitude and constantly work on team bonding.

Since this will be the team’s first season and as such there will be ups and downs, Brown has her own way of raising the varsity players morale.

“I tell my girls every time, at every practice, ‘as long as you’re better than you were yesterday you’ve already won.’ So we’re really not paying attention to the score this year… we understand it’s going to be difficult. There’s going to be a lot of hiccups whenever it comes to home games because we’ve never had home games here. Even down to the athletic director, we’re all learning something new. So that’s how I approach it with my girls that this is all new to everybody and so I want them to understand as long as you’re doing better than you were yesterday then you’re likely to succeed.”

Since the first day of tryouts, Brown said she has seen the team’s confidence, athleticism and chemistry increase.

“I’ve seen a lot of, ‘I can’t turn into ‘look what I just did coach.’ I’ve seen a lot of girls who’ve had no confidence to get out here, and man their position and move girls out of their way to call a ball, things that were not happing in the first place,” she said.

Brown has a team of athletes who either never played any sports before or currently play several.

“One thing I can say is our girls are always punctual they’re always ready to work, they’ll stay late. I mean, they’ll come anytime I ask them to come. They are on top of things and I have a great set of girls,” Brown said.

The Lady Blue Devils will hit the floor for the first time on Friday, July 29 at 4 p.m. for their Blue vs. White scrimmage. Then the team will play a jamboree in Gulfport the following Saturday, July 30.

The scrimmage will give the community a chance to see the new gym floor, witness the girls in action and help the team generate funding.

“I want to see that they’re on the court showing good sportsmanship and they’re showing these younger kids how to win and how to lose,” said Brown. “For some of these girls, as crazy as it sounds, they are going to learn how to gracefully lose and find their own strengths in who they are.”

Varsity team members Stome Boggs and Jadyn Nielson said they want to evaluate where the team stands amongst opponents. Neilson said the team has a lot of potential and skill, so she believes they will get a lot of wins.

“A lot of us have improved in our skills, serving setting and passing,” Nielson said,

“At the camp we were all over the place, so we just kind of sat down and talked about it as a group. After that we got back in and were a completely different team. So I feel if we just talk and work it out we’re going to be good,” Boggs said.

Both are ecstatic to play against their rivals, the Picayune Maroon Tide and the Long Beach Bearcats this season.