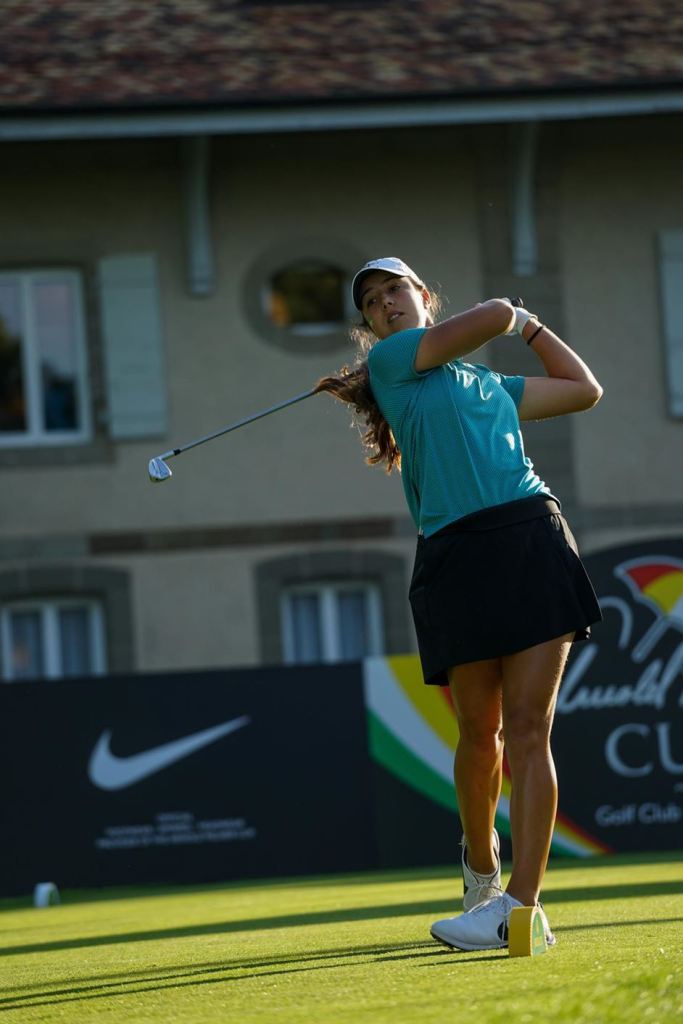 Vandœuvres, Switzerland- Julia Lopez Ramirez competed in the 2022 Arnold Palmer Cup over the holiday weekend. Throughout the three-day event, Lopez Ramirez delivered in some key moments to aid Team International to a 33-27 victory.

The Arnold Palmer Cup was co-founded by Arnold Palmer and The GCAA in 1997. The event is a Ryder Cup-style tournament featuring the top male/female collegiate golfers matching the United States vs the International Team. Since 2018, this is the only major tournament that features both men and women playing side-by-side as partners.

In the opening round, the United States won the first two matches, but three demanding victories helped Team International settle in. One of those wins came from the duo of Julia Lopez Ramirez/Mateo Fernández de Oliveira when they halved the 18th hole to secure a 1-up victory they grabbed on 17.

“We tied a lot of holes with birdies, but we stayed patient and believed in each other,” Lopez Ramirez said. “We only wanted one thing, and that’s to bring the points home. Luckily, we did that here on 18,” said Fernández de Oliveira, the first Argentinian to participate in the Palmer Cup.

After round two, Team International led Team USA 13 to 11, however, Team USA used a strong showing in the third round to make things even heading into the final round.

In Sunday’s final round, Lopez Ramirez carded Team International’s first of 13 singles victories on the day. The 2022 SEC Freshman of the Year birdied five holes, including 4-6, to defeat Brooke Seay 4 & 3 in 15 holes.

“I’m so happy for this and the team,” Lopez Ramirez said. “I know I’m around great people that treat me very well.”

Since its inception, over 125 former Arnold Palmer Cup alumni have gone on to earn cards on the PGA, European, or LPGA Tours; 32 have represented Europe or the USA in the Ryder Cup, Presidents Cup, or Solheim Cup and more than 65 have claimed over 285 victories on the PGA, European, or LPGA Tours, including three major champions in both 2020 and 2021. The United States leads the Palmer Cup series 13-12-1