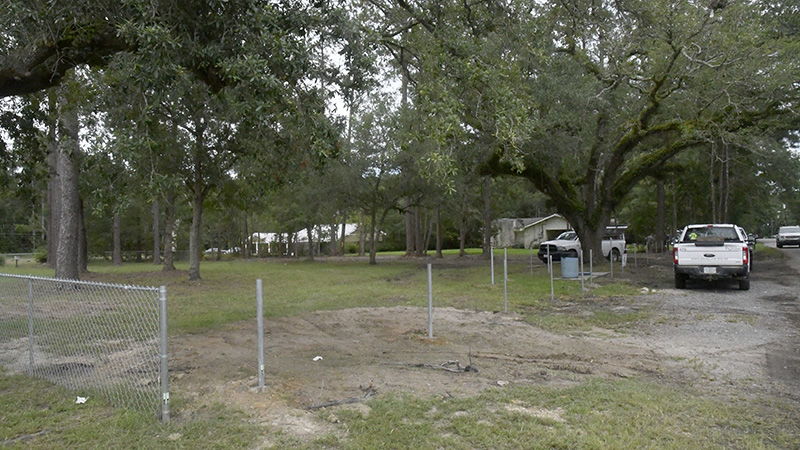 A new dog park is being constructed at the corner of Highway 43 North and Daniels Street in Picayune. Photo by David Thornton Jr.

Due to requests from Picayune residents, two dog parks will be constructed, one in 2022 and another in 2023.

With other ongoing park renovations taking place in Picayune, Mayor Jim Luke said public demand for a place to take their canine friends for a safe walk was the main reason for adding dog parks.

“I was receiving many, many phone calls from dog lovers that were saying, ‘why do we have to go to Slidell or the Gulf Coast or Hattiesburg to go to a dog park? Why don’t we have one?’,” said Luke.

Luke said he though the idea for a dog park was a good fit for the city it was a good idea, then the city located two properties they already owned to convert into dog parks. The city was awarded a $7,100 grant from Home Depot to help with the construction of the parks.

The first dog park is already under construction at the corner of Highway 43 North and Daniels Road, which is across the street from Mildred Mitchell Park. It will be called “The Barking Lot” and Luke said the aim is to have the park complete by October 1. The city has already installed sod on unimproved potions of the land, and the area has been seeded, fertilized. The footprint of the park has been expanded to accommodate more dogs. Installation of the fence is the beginning phase, and a water line is being installed at the park as well for dog hydration purposes.

Construction of the second dog park will not  begin until early January 2023. It will be located on Goodyear Boulevard where Pat Blades Memorial Park is located. The plan is to divide the two parks.

The plan is to have a park for large dogs and another for small dogs. Luke said the city is still determining which park will be for larger dogs and which one will be for smaller dogs.

Each park will include fencing, water access, a shaded area and a dog-waste receptacle. The dog park on Daniels Road will have enough space to park eight vehicles. Luke says the plan is  to construct a public restroom in the area in the immediate future. Each park will have a 10 by 20 foot leashing and unleashing station to help dog owners easily leash and unleash their pet when they arrive and when they leave.

Luke said having these dog parks will improve the quality of life in Picayune and negate the need for dog owners to have to travel out of town to go to a dog park.

When the parks open, Luke said he would like to remind all dog owners to ensure their pet is up to date on their vaccination requirements before using the parks.