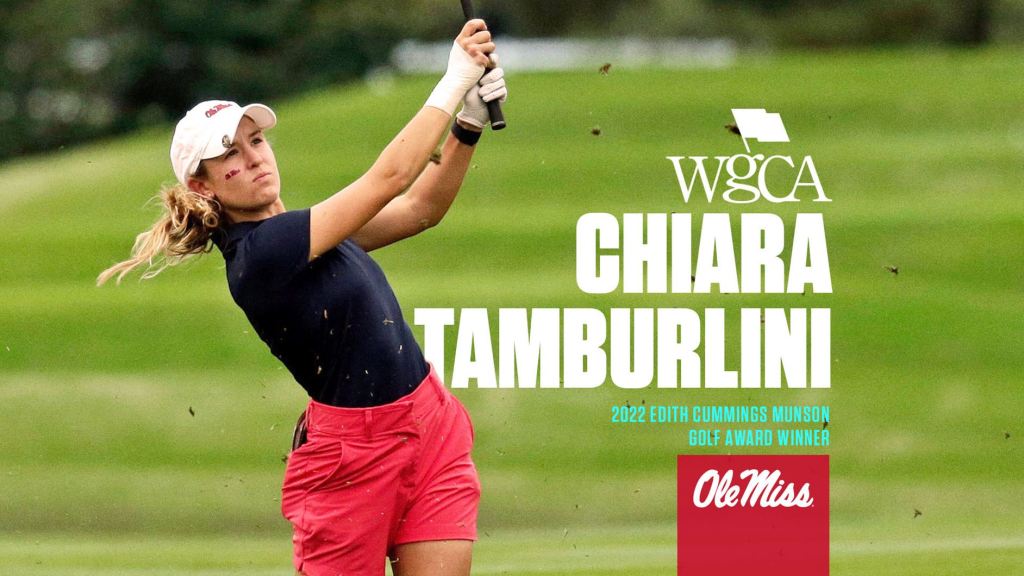 CORAL SPRINGS, Fla. – Ole Miss women’s golfer Chiara Tamburlini was recognized by the Women’s Golf Coaches Association (WGCA) as the recipient of the 2022 Edith Cummings Munson Golf Award, the organization announced Friday.
The award is presented annually in Women’s Division I College Golf, and is given to a student-athlete who is an upperclassman and both a WGCA All-American Scholar and a WGCA All-American. If more than one student-athlete qualifies, the student-athlete with the highest GPA receives the award.
Alongside the award, a donation of $5,000 will now be gifted from the Curtis & Edith Cummings Munson Foundation to the general scholarship fund of Ole Miss.
Tamburlini marks the first Rebel to ever receive the honor in the award’s 34 year history dating back to its inception in 1989. Additionally, Tamburlini marks the 10th SEC player to become an Edith Cummings Munson Award recipient, with Alabama’s Stephanie Meadow standing as the most recent SEC golfer to earn the title in 2014.
A native to St. Gallen, Switzerland, Tamburlini was named a first-team WGCA All-American following a 2021-22 season where she posted a 72.60 stroke average that ranks as the sixth-best season stroke average in program history. Tamburlini also earned top 20 finishes in all 11 of her tournament appearances on the season, including an eighth place finish at the 2022 NCAA Championships, ranking as the second-highest finish for a Rebel at NCAAs in team history.
A three-time WGCA All-American Scholar, as well as being named to the 2022 CoSIDA Academic All-America third team, Tamburlini currently holds a cumulative GPA of 3.960 as she pursues her major in finance.
For all Ole Miss women’s golf latest news and information, follow the Rebels on Twitter at @OleMissWGolf, on Instagram at OleMissWGolf.
and on Facebook at Ole Miss Women’s Golf. General athletic news can also be found at @OleMissSports on Twitter, Ole Miss Sports on Facebook, and OleMissAthletics on Instagram.