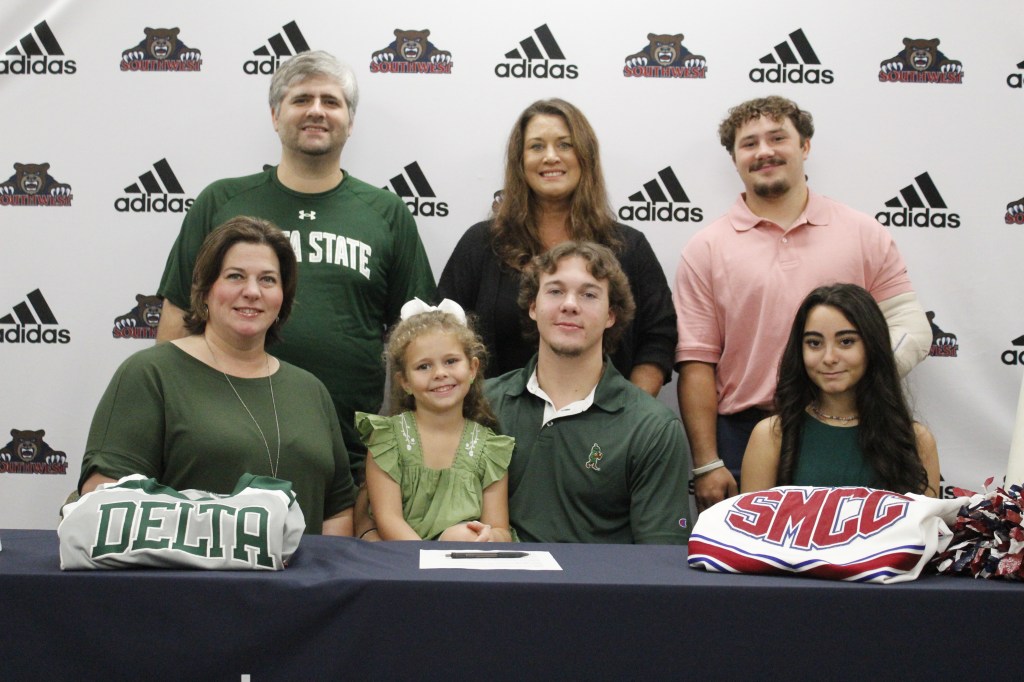 Just two years ago, cheer was something new for North Pike grad Cameron Barber. Fast-forward those two years as a member of the Bear Cheer team and now Barber will get the chance to continue not only cheering but on a four-year level after recently signing with Delta State.

“I’m excited, I can’t wait to be up there and be a part of that team,” he said. “I know how much the team here impacted me and I can’t wait to hopefully have the same impact on the team up there.”

Barber chose to sign with the Statesmen over offers from Southern Miss, William Carey and Mississippi State.

“I love the small feel of it,” he said. “It feels like a community there and not like a school where nobody knows your name.”

Looking back on the last two years, Barber is thankful for making the decision, not only to cheer but do so at Southwest.

“I don’t know where I would be right now if it wasn’t for cheer at Southwest,” he said. “I met my best friend (Eli Woodward) while here at Southwest. I’ve had so many other friends like McCain Carnegie who helped mentor me.”

Barber also noted that when on his visit to the campus in Cleveland, everyone there was very welcoming.

“(I admired) how kind and how helpful everyone was up there,” he said. “At Delta, everyone cared and went out of their way to help you. It felt like it does here at Southwest.”

He also wanted to shine some light on his teammates that have helped him along the way over the past two seasons.

“I really don’t have the words to say, honestly,” he said. “I don’t know where I would be without them.”

Some advice that Barber would offer for someone who is entering their first year of cheer at Southwest centers around the word ‘trust.’

“Put in the hard work and you will see results,” he said. “Trust your friends, trust your teammates, trust your coaches and they will get you where you need to be.”

SMCC Cheer Coach Cindy Henderson said that she is proud of the progress Barber made since his beginning with her team two years ago.

“Cameron was determined to become the best that he could be,” she said. “When he started, it was really slow going at first but when it hit, he got it. He was probably my most consistent and my inspiration to see how quickly someone can grow and how well that they can do. He not only worked and excelled in cheer but he excelled in the classroom as well.”