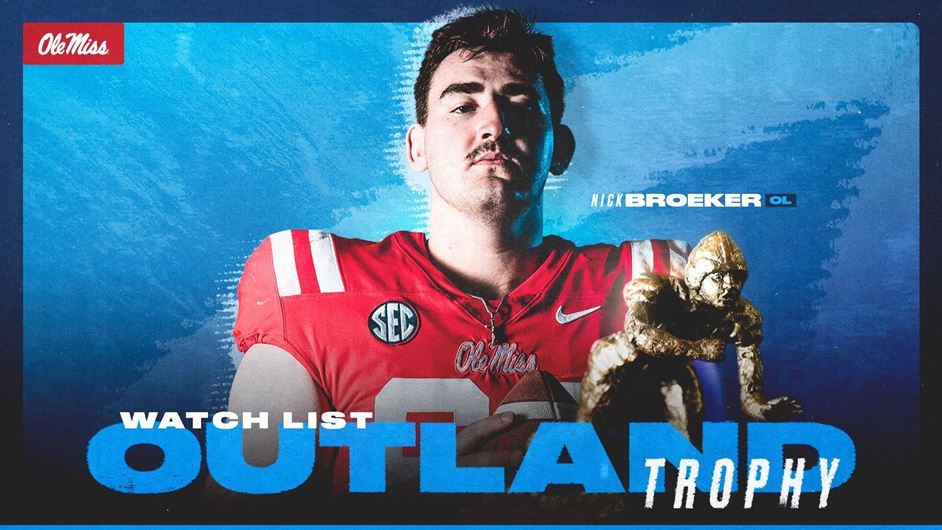 DALLAS – Ole Miss offensive lineman Nick Broeker has been named to the preseason watch list for the 2022 Outland Trophy, the Football Writers Association of America announced on Tuesday.

The Outland Trophy is awarded annually to the best college football interior lineman in the FBS.

Broeker, a preseason All-America selection by Athlon Sports, is yet to miss a game in his collegiate career. He started all 13 games at left tackle in 2021, playing in nearly all offensive snaps (927). Broeker allowed just two sacks in 497 pass blocking snaps, paving the way for the sixth-ranked total offense (492.5) in the country, as well as the No. 12 rushing offense (217.6).

A multi-year starter for the Rebels, Broeker will hold down a new position along the Rebel offensive front in 2022. After starting every game at left tackle over the past two seasons, Broeker will move to left guard, where he projects to play at the next level.

Broeker was also awarded with the J. Richard Price Courage and Compassion Award at the end of spring practice, given annually to the senior lineman who, in the opinion of his coaches, has demonstrated extraordinary courage and unusual compassion in his dedication to his team and to Ole Miss.

The recipient of the 2022 Outland Trophy will be announced on The Home Depot College Football Awards, live on ESPN on Thurs., Dec. 8. The official presentation to the winner will be made at the Outland Trophy Awards Dinner sponsored by Werner Enterprises and produced by the Greater Omaha Sports Committee in Omaha, Neb., on Jan. 11, 2023.

The Outland Trophy winner is chosen from three finalists who are a part of the annual FWAA All-America Team. The FWAA All-America Committee, after voting input from the entire membership, selects a 26-man first team and eventually the three Outland finalists. Committee members, then by individual ballot, select the winner. Only interior linemen on offense or defense are eligible for the award; ends are not eligible.