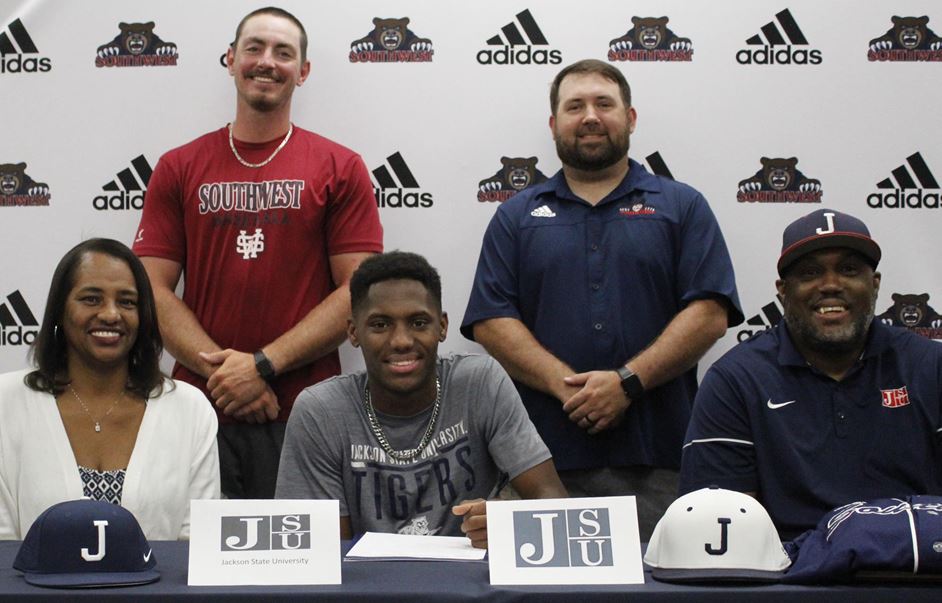 In similar fashion to his teammate, Brady Wilson, SMCC Baseball’s Austin Boarden took advantage of his one year as a member of the Bear baseball team. Now the Ridgeland-native is not only getting the chance to continue his career at the four-year level but doing so in his own backyard after recently signing with Jackson State.

“I’m excited,” Boarden said. “Growing up I’ve been going to Jackson State games ever in every sport ever since I was a little kid. Getting to play there is exciting.”

Boarden chose to sign with JSU after receiving interest from another Southwestern Athletic Conference school with a tiger mascot in Grambling.

Boarden admits that the close proximity to home was a big factor in his decision on where to sign but it was also familiarity.

“I know a lot of people there and I get to stay at home and stay with family,” he said. “As soon as I got it (offer) I knew that is where I wanted to go. I went to check out the other offer first to make sure it was the right decision.”

Boarden is anxious to be a big part of a Tiger baseball team that went 29-27 overall and 16-14 in conference play. He is also very excited to be a part of a growing athletics scene on the campus of JSU.

“A lot of people are talking about the football team and the girls basketball team won a championship three-years straight, and baseball went undefeated (in conference) two years ago,” he said.

Looking back on his lone year in Summit, Boarden said that it is a decision that he does not regret.

“Coming here, might have been the best decision that I have every made,” he said. “It got me to the next level. I want to thank Coach (Jack) Edmonson, Coach (Tyler) Graham and Coach (Derrick) Mount for helping to get me where I am.”

In addition to the Bear coaching staff, Boarden also spoke very highly of his teammates.
“I want to give a shout out to all of them especially my roommate Conner McHenry, Hunter Harrell, Cole Tillman and Bradley Whitaker,” he said.

Coach Edmonson, a SWAC player himself after finishing his collegiate career at Mississippi Valley, was very thrilled to see Boarden sign on with a very good Tiger program.

“Jackson State is a place that growing up, he wanted to play at,” he said. “I’m happy he was able to reach those goals through Southwest. He is an awesome kid who works hard and I think that he is going to do well there.”