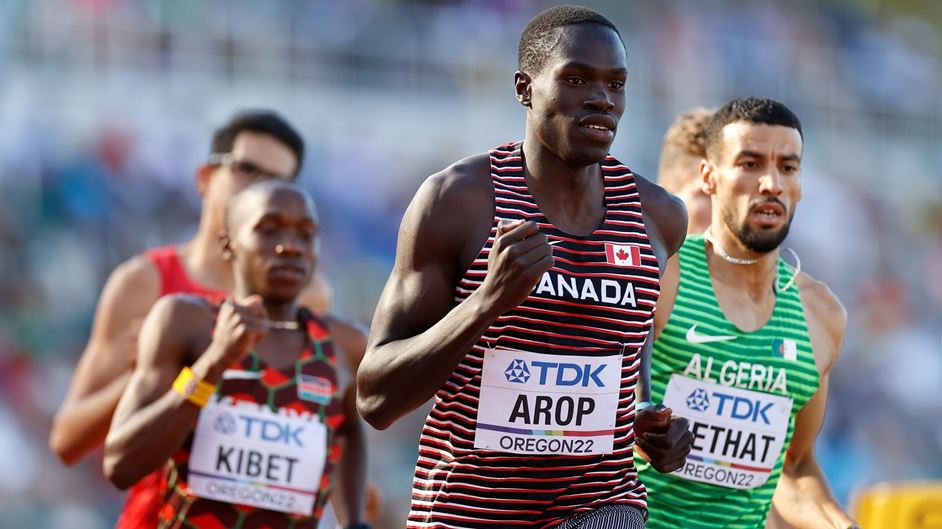 EUGENE, Ore. – Marco Arop announced his return to the international stage with authority in the qualification heats of men’s 800m at the World Athletics Championships with the fastest time of any competitor.

By winning his heat, Arop automatically advances to Thursday night’s semifinals, which are set for 9 p.m. CT. His time of 1:44.56 was his third-fastest time of the outdoor season, and only four other runners clocked in under 1:45.00 across the six heats.

Arop took the lead in the final turn with 200m to go. Down the front stretch, it looked like he would be caught, and momentarily he was, but with three powerful strides the 6-foot-4 MSU record holder reasserted his lead.

Former MSU record holder Brandon McBride and reigning SEC Champion Navasky Anderson ended up holding each other back in the third heat. Both were at the center of a series of shoves approaching the turn coming off the backstretch.

McBride went down at the 200m mark after getting tangled with Anderson and American Bryce Hoppel. He fell back nearly five seconds behind the pace while picking himself up off the track, and saw the pack pull away.

“It’s really, really disappointing,” McBride told CBC in Canada. “It all happened so fast. I’m in shock. We’ll have to see if we can protest this and see if something comes of it.”

Anderson survived the collision and slid up to second position, clocking in just three-hundredths of a second off the pace. He remained at the front of the pack through the 500m split, but was unable to kick on the backstretch and fell back to seventh in the heat.

The heats were some of the fastest in the history of the World Athletics Championships. Previously, the fastest time not to advance from the opening heats was 1:46.24 in 2007. This year, the fastest non-qualifying mark was 1:46.05.

McBride and Athletics Canada will lodge a protest, and the Bulldog runner could be reinstated later on Wednesday night. Anderson’s World Championships run is over.

Three more Bulldogs remain to begin competition at the Championships in Eugene, Oregon, the site of this year’s NCAA Championships.

The men’s javelin is set to begin on July 21 with former teammates Anderson Peters (GRN) and Curtis Thompson (USA) throwing side-by-side again for the first time since the Tokyo Olympic Games. Peters is the reigning World Champion in the event.

American Tiffany Flynn will round out the competition in the women’s long jump, an event she placed fourth in at the World Indoor Championships earlier this year. Preliminary rounds begin July 23.