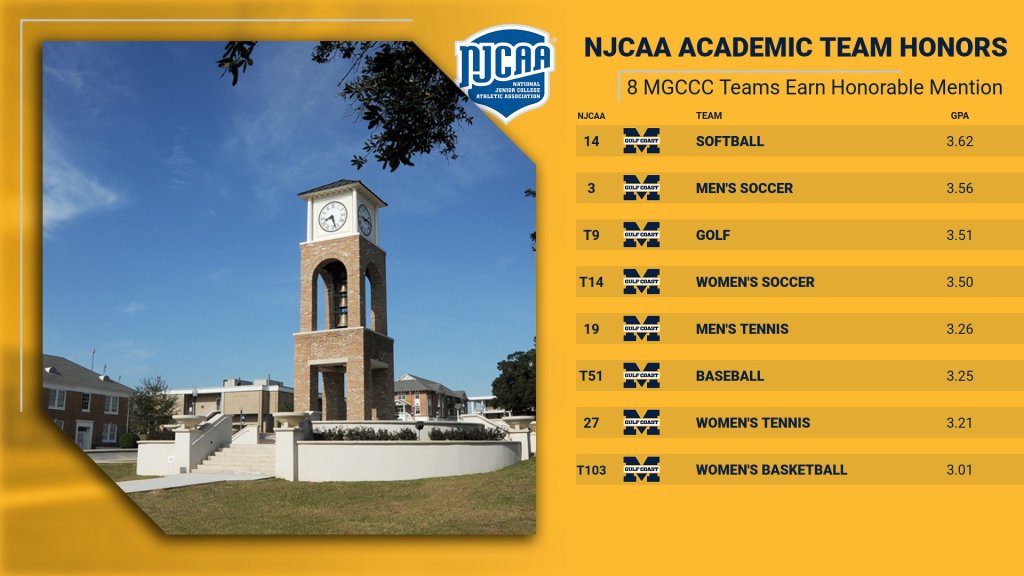 PERKINSTON — Mississippi Gulf Coast had eight programs earn NJCAA Academic Awards in the 2021-22 season, including five that ranked in the top 20 in their respective sports.

Teams must have a 3.0 GPA or higher to be honored. The MGCCC Athletic Department’s efforts in the classroom are overseen by Athletic Academic Advisor Julie Gallup. The eight teams honored won NJCAA Academic Team of the Year Honorable Mention.

Coach David Kuhn’s softball team advanced to the postseason on the field and finished 14 among softball programs in all three divisions with a 3.62 GPA.

Coach Chris Handy’s men’s soccer team had a 3.56 GPA, the third-highest in the country, and won the MACCC and NJCAA Gulf District championships to advance to the NJCAA Championship.

Coach Brad Thornton’s men’s golf team finished as runners-up at the NJCAA Division II Championship and had the ninth-best GPA with a 3.51.

The women’s soccer team finished with a GPA of 3.50 and ranked 14th in the country.

Coach Sam Blackburn’s men’s tennis team finished with a 3.26 GPA after runner-up finishes in the MACCC and NJCAA Region 23. His women’s team had a 3.21 GPA and finished in third place in the conference and region.